Shooting from the Hip . . . with Blanks

Paul Jacob
|
Posted: Nov 12, 2017 12:01 AM
Share   Tweet
The opinions expressed by columnists are their own and do not necessarily represent the views of Townhall.com. 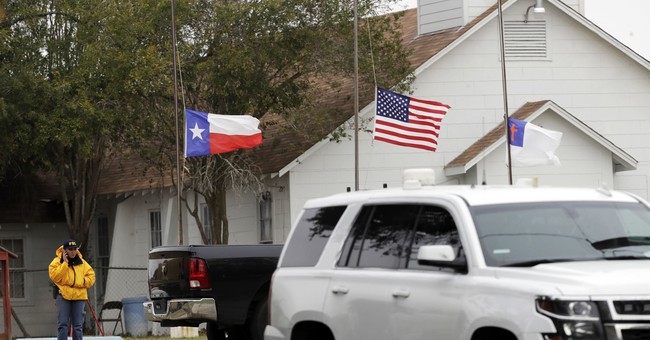 “When will this end?” prodded Diane Feinstein, California’s other senator. “When will we decide that we can’t accept massacres in our places of worship, schools, or at concerts? When will we actually do something about it?”

“As my colleagues go to sleep tonight,” chided Connecticut Senator Chris Murphy, “they need to think about whether the political support of the gun industry is worth the blood that flows endlessly onto the floors of American churches, elementary schools, movie theaters, and city streets.”

On the other hand, President Donald Trump pointed out that criminals wouldn’t shrink from violating gun laws to acquire weapons. The president also speculated that “instead of having 26 dead, you would have had hundreds more dead” had Stephen Willeford, the former National Rifle Association instructor living a block from the First Baptist Church in Sutherland Springs, Texas, not rushed to the sound of the gunfire with his AR-15 in hand.

No one can predict, of course, what precisely would have happened without Willeford’s well-armed and clear-headed heroics. We only know and give thanks that a good guy with a gun stopped a bad guy with a gun.

“Democrats have rushed to microphones to condemn the National Rifle Association for its supposed intransigence,” Ben Shapiro wrote at National Review, “despite the fact that it was an NRA instructor who put down the Texas church shooter.”

Furthermore, as Shapiro recounted, shooter Devon Kelley had previously “escaped from a mental institution in 2012, threatened his superior officers and attempted to smuggle weapons onto a military base to carry out those threats, cracked the skull of his infant stepson, beat his wife, abused a dog.”

And yet the background check system is so badly managed as to provide no hint of incapacitation to this dangerous man. Instead, it offered a seal of approval to buy a weapon.

After previous mass shootings, congressional Democrats have self-righteously pushed legislation that — in each case — would not have prevented that particular killer from obtaining the weapons under its own terms. This time it’s different, since the shooter should not, by current law, have been allowed to purchase the firearms he used to commit such evil. Kelley’s conviction for domestic violence, while serving in the Air Force, disqualified him from owning a gun.

But the Air Force did not do its job, failing to report his record to the FBI. So the subsequent background check found . . . nothing.

No system is perfect, of course. But, lo and behold, even with constant calls for additional legislation to mandate more background checks, the background check system lacks the critical data inputs necessary for providing meaningful protection.

“An FBI database known as the National Instant Criminal Background Check System, which contains information for use in background checks on prospective gun buyers, had only one Pentagon entry for domestic violence convictions as of Dec. 31, 2016,” the Associated Press (AP) reported.

And it turns out this problem is anything but new.

“The Pentagon has known for at least two decades about failures to give military criminal history information to the FBI,” informed the AP, “including the type of information the Air Force didn’t report about the Texas church gunman. . . .”

The Obama administration, through its command of the military or lack thereof, failed to execute the law designed to keep guns out of dangerous hands. Rendering the background check no check at all. Fewer speeches about the need for more gun laws and more attention to the details of getting the job done — effectively implementing the law to actually control guns — might have saved lives.

And it appears that this wholesale failure dates back to George W. Bush and even Bill Clinton days. And, more pertinently, continues into the Trump administration.

At the direction of Defense Secretary Jim Mattis, a Pentagon inspector general has now launched an investigation to “define what the problem is.” Twenty years ago, a 1997 IG investigation found widespread failures to report data to the FBI, “which prevents civilian law enforcement agencies from having significant information on military offenders.”

For example, the Army failed to inform civilian authorities of criminal case outcomes a whopping 79 percent of the time, the Air Force flunked half the time, and the Navy neglected its reporting duty in 94 percent of cases.

The report identified “several reasons for the lapses,” according to the AP, “including ambiguous Pentagon guidelines and a lack of interest among the military services in submitting information to an FBI viewed as chronically overburdened with data.”

A lack of interest?

Where does the buck stop?