Hate Is Our Business

Paul Jacob
|
Posted: Feb 19, 2017 12:01 AM
Share   Tweet
The opinions expressed by columnists are their own and do not necessarily represent the views of Townhall.com. 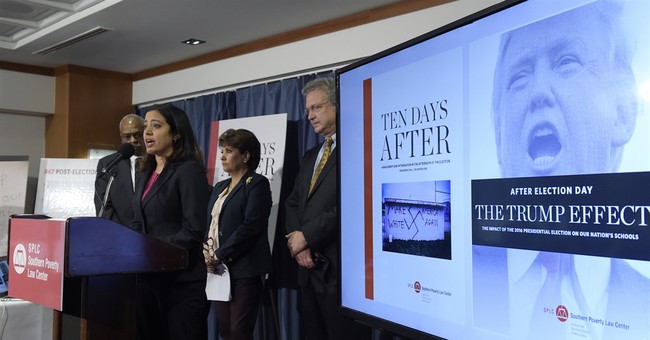 Last week, the Southern Poverty Law Center (SPLC) released a report entitled The Year in Hate and Extremism. It missed more than half the story.

“The number of anti-Muslim hate groups in the United States has nearly tripled since 2015,” summarized the Washington Post, “due in part to radical Islamic attacks and the incendiary rhetoric of last year’s presidential campaign.”

Mark Potok, the Center’s senior fellow, was quoted declaring that, “2016 was an unprecedented year for hate.”

Oddly, with violence and intimidation rampant against conservative speakers on college campuses and protests against Trump increasingly turning violent, none of those insurrectionist anti-capitalist groups — the Antifa or By Any Means Necessary — were mentioned in the SPLC report.

Well, it’s surprising if you didn’t already know that, while the Southern Poverty Law Center gained notoriety by winning lawsuits against the violent Ku Klux Klan and tracking the Klan, Nazis, and racist “hate groups,” it is nonetheless completely uninterested in hate and violence . . . when committed by folks on the left side of the political spectrum.

“We’re not really set up to cover the extreme Left,” was the response SPLC gave to National Review’s Charles Cooke, when he inquired about the SPLC looking at the Cuyahoga 5, arrested in 2012 for attempting to blow up a downtown bridge in Cleveland. All five men arrested were part of Occupy Cleveland (a fact that ABC News also decided didn’t matter enough to mention).

But, hey, the tripling of anti-Muslim hate groups shouldn’t be ignored, should it?

Writing at Reason.com last year, Jesse Walker points out that when groups splinter, they get weaker, not stronger. Yet, for SPLC purposes there are more groups to hype.

In fact, SPLC’s hate-hype machine is so lucrative that the group now boasts an incredible $250 million in the bank, in addition to raising $40 million per year.

Walker also detailed how the SPLC exaggerates the problem by counting every affiliate group as a separate hate group, writing that last year’s “list of anti-government groups, for example, includes 44 chapters of Phyllis Schlafly’s Eagle Forum, 24 chapters of the John Birch Society, a separate listing for ‘the John Birch Society Shop,’ and the paleolibertarian website LewRockwell.com.”

Surprised that groups such as Eagle Forum receive listing as “hate groups”? Wonder how a website such as LewRockwell.com — featuring a variety of opinion pieces — can possibly be a “hate group”?

They have plenty of company. Any religious organization (or newsletter) holding that homosexuality is a sin or that heterosexual parents are better for children may be listed as a “hate group.” Groups such as the Federation for American Immigration Reform (FAIR), which don’t favor open borders and amnesty for immigrants in the country illegally, are “hate groups.”

In the course of highlighting the rise of anti-Muslim groups, in its latest report, the SPLC attacks a number of Islamic scholars and reformers, including Maajid Nawaz, who now fears that the SPLC label will become his death sentence at the hands of Muslim extremists.

“I am a brown, liberal, reform Muslim. I have survived violent neo-Nazi racism and served as a former War on Terror political prisoner in Egypt, witnessing torture,” he told The Daily Beast. “Yet, in a trip that takes us through the looking glass, the largely white American non-Muslim ‘progressive’ leadership at the pro-civil liberties group Southern Poverty Law Center (SPLC) has just published a ‘journalist’s field list’ naming me as an ‘anti-Muslim’ extremist.”

Of course, the SPLC list of hate groups actually doesn’t have anything whatsoever to do with violent extremism. “Let me say for starters that when we name groups ‘hate groups,’ that has nothing to do with any allegation of criminality or some kind of measure of expected violence,” SPLC mouthpiece Mark Potok admitted on MSNBC. “It’s purely about ideology.”

The whole SPLC scam is to lump political opponents — conservatives and libertarians — in with Nazis and the KKK, in order to smear them.

And with disastrous consequences, as the folks at the Family Research Council (FRC) can attest. Just over four years ago, Floyd Corkins walked into the group’s headquarters, which he found using SPLC’s “Hate Map.” Armed with a semi-automatic pistol, his intent, as he admitted in open court, was to “kill as many as possible and smear the Chick-Fil-A sandwiches in victims’ faces.” He ended up only severely injuring the security guard.

Why did Corkins try to murder people with the FRC? He told FBI interrogators that, “Southern Poverty Law lists anti-gay groups. I found them online, did a little research, went to the website, stuff like that.”

Let’s stipulate that the SPLC isn’t responsible for the acts of that violent man. But that doesn’t stop the SPLC hypocrites from blaming President Trump for “many” of “the wave of post-election hate incidents . . . that . . . appear to have been inspired by him and feature references to his name.”

Nor does the SPLC accept any blame for mislabeling people and groups as “hateful” and “extremist,” even when those labels are increasingly being used as an excuse for violence. At UC Berkeley and elsewhere, we now hear left-wing groups and activists claiming a license to “shut down” or beat down people they claim are “fascists.”

The recent headline in National Review best sums up the SPLC worldview: “Everyone Who Disagrees with the SPLC Is Hitler.”

It’s time the mainstream media got a clue and covered the SPLC accordingly. “Many news organizations, from wire services to TV networks, covered the new [SPLC] figures uncritically,” a Foreign Policy piece argued, adding that “their research needs to be weighed more carefully by media outlets that cover their pronouncements.”

This country needs an anti-hate group that isn’t itself a hate group.