Paul Jacob
|
Posted: Jan 15, 2017 12:01 AM
Share   Tweet
The opinions expressed by columnists are their own and do not necessarily represent the views of Townhall.com. 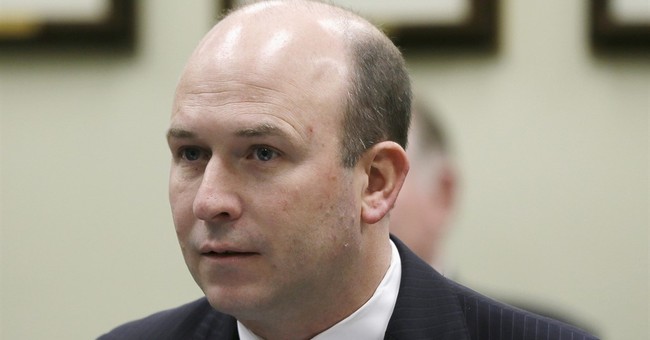 Former Arkansas State Rep. Micah Neal pled guilty earlier this month to a felony charge of conspiring “with an Arkansas state senator to use their official positions to appropriate government money to certain nonprofits in exchange for bribes.”

For his corrupt part in the scam, Rep. Neal raked in $38,000 in “legislating-around” money between 2013, when he entered the House, and 2015, when he decided not to seek re-election (perhaps because the Feds were on his tail). The evidence shows Neal decided to embrace graft his very first month in office.

Neal now faces a prison term that could run as long as 20 years, in addition to a $250,000 fine. As a first-time offender, though, he is unlikely to receive the maximum penalty for the felony.

Court documents note the involvement of several more seasoned conspirators as well, though not by name. Most importantly, there’s the mysterious Senator A, who took the freshman representative under his crooked wing.

Their scheme, reported Arkansas Business, “direct[ed] $600,000 in state GIF funds to the Northwest Arkansas Economic Development District, which then distributed it to two nonprofit entities.” Those two outfits — referred to as Entities A and B in the plea agreement with the Department of Justice — then kicked back dough to Rep. Neal and Senator A through several bagmen.

A few days later, Arkansas Business sorted out “the alphabet soup of unindicted people and entities.” It turns out that Senator A, the devious ringleader, is someone term limits supporters have encountered before: former State Senator Jon Woods.

Sen. Woods infamously authored Issue 3, the dishonestly-worded 2014 constitutional amendment that severely weakened term limits (while telling voters only that it “established term limits”), imposed a gift ban so “tough” that now all legislators can get free meals from lobbyists anytime the legislature is in session, and created an “Independent Citizens Commission” (a majority appointed by legislators), which immediately awarded legislators a whopping 148 percent pay raise.

Woods’s indictment appears imminent. As one can only hope.

The (alleged) crimes in these cases involve the aforementioned General Improvement Funds. Legislators can personally direct GIF dollars to pet projects and favored cronies, taking full political credit. The process is similar to congressional earmarks. And every bit as corrupting . . . if not more so.

In his 2017 budget, Arkansas Gov. Asa Hutchinson has wisely zeroed out the sleazy GIF program.

In an article entitled, “How a 1997 Power Grab is costing Arkansas taxpayers millions on pet projects,” the grassroots group Conduit for Action explains that the GIF rules changed just before our new millennium, when term limits were about to first clean out the state House (1998). The program had theretofore allocated funds by a joint determination between the governor and legislative leaders, but the old batch of career legislators decided instead to give themselves unchecked control over this vote-buying slush fund.

Also, before the Natural State’s term limits kicked in, even bigger corruption surfaced. “A Federal grand jury shook the Arkansas political establishment today with a long list of political corruption indictments that reaches to the apex of the state Legislature,” the New York Times reported in 1999.

Back then, Sen. Nick Wilson was Arkansas’s loudest term limits critic . . . until his three-decade-long career ended with a guilty plea to 133 counts of racketeering and other public corruption charges.

Interesting that top legislative enemies of term limits, both past and present, so conspicuously wear the Scarlet Letter “C” for corruption. Coincidence?

Term limits are no friend to corruption. And vice-versa.