Have You Read the Constitution?

Paul Jacob
|
Posted: Jul 31, 2016 12:01 AM
Share   Tweet
The opinions expressed by columnists are their own and do not necessarily represent the views of Townhall.com. 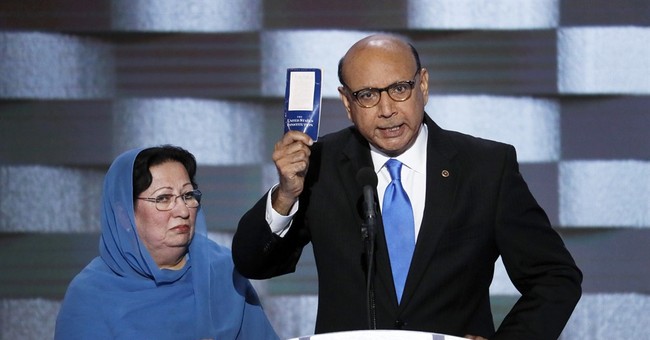 Last week’s Man of the Week? No brainer: Khizr Khan, a Muslim and Pakistani immigrant.

Why? Khan, who lost his son, an Army captain, to a suicide bomber in Iraq, eloquently addressed the Democratic National Convention and posed the Question of the Century.

“Tonight, we are honored to stand here as the parents of Capt. Humayun Khan, and as patriotic American Muslims with undivided loyalty to our country,” Khan began, his wife in headscarf standing by his side.

“Like many immigrants, we came to this country empty-handed,” Kahn continued. “We believed in American democracy — that with hard work and the goodness of this country, we could share in and contribute to its blessings.”

The Khan family has contributed. Mr. Khan is an attorney with a law degree from Harvard. His wife, Ghazala, taught Persian at a college in Pakistan, and then, after coming to America, reared three boys in the Washington, D.C. suburbs.

“We were blessed to raise our three sons in a nation where they were free to be themselves and follow their dreams,” added Khan.

The couple’s oldest son, Shaharyar, co-founded a biotechnology company, where their youngest, Omer, also works. Humayun was the middle child. In June of 2004, he lost his life in Iraq, after ordering his men to take cover and personally confronting a suicide bomber. Capt. Kahn posthumously received a Purple Heart and the Bronze Star for his courage in saving the lives of his men.

Khizr Kahn can’t help but think and feel, as he spoke: “If it was up to Donald Trump, [Humayun] never would have been in America. Donald Trump consistently smears the character of Muslims. He disrespects other minorities, women, judges, even his own party leadership. He vows to build walls and ban us from this country.”

Okay, for the record, it’s hard to hold it against the Donald that he disrespects “his own party leadership.” Otherwise, Khizr is correct.

Poignantly, Mr. Khan pointed out to the assembled Democrats that people of “all faiths, genders, and ethnicities” are buried in Arlington Cemetery, asking Mr. Trump to “[g]o look at the graves of the brave patriots who died defending America.”

Americans such as Mr. and Mrs. Khan’s son.

My only disagreement with Khan is that he went on to endorse Hillary Clinton, who I fear would do enormous harm to America — not the least of which may be adding gravestones to Arlington Cemetery from foolish Middle East interventions. Of course, Hillary called Khizr and Ghazala Khan’s son “the best of America,” and understandably, they agree with her.

Khan brought the crowd to its feet when he pulled a copy of the United States Constitution out of his pocket and challenged Donald Trump: “[Y]ou are asking Americans to trust you with our future. Let me ask you: Have you even read the U.S. Constitution? I will gladly lend you my copy.”

This was no stunt. Mr. Khan is known to pass out pocket copies of the Constitution. The New York Times reported that, “[H]e admires both Ronald Reagan and Barack Obama, though Thomas Jefferson is his real hero.”

Kahn told the Times, “[Jefferson’s ideals] are the values that we have cherished as a family and as Americans.”

So, let’s ask Donald J. Trump — and also Hillary Clinton . . . and while we’re at it, why not Libertarian Gary Johnson and the Green Party’s Dr. Jill Stein: Have you read the Constitution?

But let’s demand just a tad more of our next chief executive. Here are several additional inquiries:

Do you favor repealing parts of the First Amendment? Which parts?

Every U.S. senator of the Democratic Party persuasion has already voted to repeal the Amendment’s core “free speech” clause in order to allow incumbent congressmen to regulate their own and their opponent’s campaign fundraising and spending.

Does the Second Amendment guarantee an individual's “right to bear arms”?

That’s what the U.S. Supreme Court ruled in the Heller case. Let’s also hear whether a candidate would appoint judges intent on reversing the Heller decision, and opening the door for banning private gun ownership.

Will you sign an executive order to end all federal government use of civil asset forfeiture?

Civil asset forfeiture laws allow police and federal agencies to take money and property from people “suspected” of a crime, even if never charged with or convicted of a crime. Police actually take more from the public in this fashion than do our nation’s burglars.

I have plenty more questions.

Answers will be tougher to get.