Speaker Of The Devil

Paul Jacob
|
Posted: May 01, 2016 12:01 AM
Share   Tweet
The opinions expressed by columnists are their own and do not necessarily represent the views of Townhall.com. 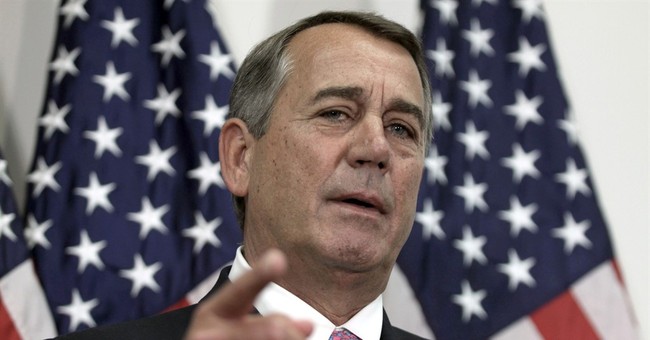 To be called the Devil is rarely a good thing. But did John Boehner, former Speaker of the House, just hand Senator Ted Cruz a steaming, hot helping of hope?

During an event at Stanford University, Mr. Boehner called Cruz “Lucifer in the flesh” and then clarified his remark: “I have Democrat friends and Republican friends. I get along with almost everyone, but I have never worked with a more miserable son of a bitch in my life.”

Former Speaker Boehner vowed never to vote for Mr. Cruz, even against the likes of Hillary Clinton, adding: “Over my dead body will he be president.”

But consider the source. Boehner, the orange-skinned former Republican leader, was spectacularly unsuccessful at stopping much of anything during the Obama years, and even looks the part of Hades.

“Mr. Boehner struggled almost from the moment he became Speaker in 2011 to manage the challenges of divided government while holding together his fractious and increasingly conservative Republican members,” reported The New York Times in response to his resignation as Speaker and from his House seat altogether, after 24 years in Congress.

In the U.S. Senate, Cruz had repeatedly put the feet of leadership in both the House and Senate to the fires of the most combative Washington politics — when they “worked together” — and apparently Boehner didn’t like the heat.

For his part, Cruz says the two men have hardly met, much less worked together. But the Texas senator has been quite unequivocal in likewise not appreciating where Senate Majority Leader Mitch McConnell and Speaker Boehner were — for lack of a better term — leading.

While on top, Boehner personified the art of compromise in Washington D.C., becoming the face of The Establishment . . . and, increasingly, a demon in the eyes of the Tea Party.

In fact, the Old Gray Lady’s coverage of Boehner’s departure last year went on to suggest it was in no small part due to the fact that “several [Republican presidential] candidates have openly derided Republican leaders in Congress like Mr. Boehner.”

Now, with the race entering the critical homestretch, with the top two candidates both perceived as strongly anti-establishment, the former Speaker is, in effect, testifying on Sen. Cruz’s behalf. By passionately opposing him. Boehner’s brickbats prove that the Texas senator is the No. 1 thorn in the side of the Washington Establishment, highlighting the vast surplus of hated that official Washington holds for Ted Cruz.

Senator Cruz can lay rightful claim to that most prestigious title: THE MOST HATED MAN IN WASHINGTON. It can hardly lose him any points with rank-and-file Republicans in Indiana and elsewhere — anti-insider folks comprising a clear consensus in the GOP.

Campaigning in Indiana, Cruz responded to Boehner’s attacks succinctly: “What made John Boehner mad is that I led a movement to hold Washington accountable.”

“If you’re happy with John Boehner as speaker of the House and you want a president like John Boehner, Donald Trump is your man,” added Cruz.

Meanwhile, Mr. Boehner also expressed his feelings of friendship with Ohio Gov. John Kasich and businessman Donald Trump, telling the college audience that he has played golf with Mr. Trump for “years” and the two are “texting buddies.”

How nice. And how damning for The Donald.

“Tell me again who will stand up to Washington?” asked a subsequent tweet from Sen. Cruz, “Trump, who’s Boehner’s ‘texting and golfing buddy,’ or Carly & me?”

Back in January, Bob Dole, the three-decade Kansas senator and a Washington fixture, attacked Cruz, arguing that nominating him would be “cataclysmic” for Republicans and nastily professing, “Nobody likes him.”

Dole meant: Nobody in Washington.