Paul Jacob
|
Posted: Feb 28, 2016 12:01 AM
Share   Tweet
The opinions expressed by columnists are their own and do not necessarily represent the views of Townhall.com. 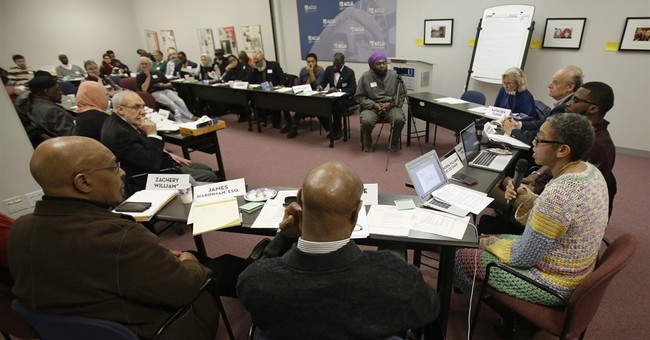 The “gender pay gap” is a big deal. Worrying about women making less than men is one of the central preoccupations of the “progressive” Left. It may play a substantial part in the upcoming presidential campaigns.

Democratic politicians and feminist meme-pushers, for example — including our current U.S. president — often talk as if the issue were about women doing the same jobs as men but getting paid less. But that’s not what the stats about wage differences by sex actually track.

The contention is that “women make 78 cents on the dollar” earned by men. At least in America. The statistics vary by country, by time, and a number of other statistical inputs.

But such statistical artifacts are not about men and women earning different amounts for the “exact same job” — though that does sometimes happen. These stats are about women as a group and men as a group in a given region, this case America.

Women en masse tend to earn less on the open market than men. That’s the truth. And it should be expected, given what we know about men and women.

It’s also a truth that this “earnings gap” by sex is less than it used to be.

There is no mystery here. It just so happens that women, in general, work fewer days and hours (often taking more time off to birth and raise children) in the open labor market than men do. Working less means less remuneration for the fewer services rendered.

But there is more to it than just that.

Women also tend to choose different careers than men. The recent fretting about the lack of female participation in STEM careers is a good example. Some feminists claim that rampant sexism in the hard-sciences/high-tech industries have crowded women out of jobs in these fields. Research does not bear this charge up (though of course sexism remains at play, to some degree, everywhere). In case you hadn’t noticed, women have been actively encouraged (for years!) to go into these fields, and yet they still tend overwhelmingly to prefer service, medical and educational careers instead.

One could just shrug and say “there’s no accounting for taste,” but that’s not quite true. We know why women tend to prefer these “softer” sciences and arts. It’s just not “politically correct” to say it. (And of course there are individual exceptions to all generalizations. But exceptions are just that: outliers that don’t really change the statistical outcomes.)

There is a lot more here to consider, of course. Wages are based — in great part, at least — on the productivity of the worker. And productivity of the worker is not measured by effort so much as actual product (economists tend to use terms like marginal product — a phrase you almost never here from wage-gap worriers). Workers make more in some industries than in others. If you want to make a lot of money, you have to choose carefully.

Wage rates and lifetime earnings are about time and productivity. And the choices we make.

There are other, related differences between men and women in the labor markets. For instance, men take on the most overwhelmingly dangerous jobs in society, and die at far higher rates than women do — rates like 13 to 1. And yet I’ve never heard anyone on the Left demand that we close this startling “gender death gap.”

I wonder why. (Not really.)

Melinda Gates is concerned about something similar to the notorious “wage gap.” She is interested in task dissimilarities between men and women, namely the fact that women have, traditionally, worked at home, not earning a wage or salary but feeding and caring for children while men go out into the open labor market to do work that brings in pay — that the families then spend.

In her contribution to the annual letter of the Bill and Melinda Gates Foundation, Mrs. Gates uses the term “unpaid work.”

It may not be the best term.

“Unpaid work is what it says it is,” Gates writes. “It’s work, not play, and you don’t get any money for doing it. But every society needs it to function.” And how. But what she doesn’t make clear is a simple fact of our culture: in many, perhaps most, traditional homes of the recent past, the money the husband made was largely managed by the wife. To say it is “unpaid” is only true on the specifically contractual level. Household income spent on the household, by the married couple, served as the basic social unit in many ways, and its economy the bedrock of the nation — of all nations.

“Now, this work has to be done by somebody,” Mrs. Gates goes on. “But it’s overwhelmingly women who are expected to do it, for free, whether they want to or not.” Well, that’s true and untrue, depending on perspective. Similarly, men “have” to go out and earn a living, “whether they want to or not.” How to avoid that? Not marry, become a hobo. Or, today, in the West, collect state subsidy (food stamps, etc.). What you gain in personal freedom you lose in many other areas. We all face trade-offs.

Pretending that women don’t make choices is hardly an answer to anything. Assuming that satisfaction with those choices is the standard for judging consent is hardly feasible. Pretending that the options we face are somehow worse for women than for men shows an astounding lack of empathy.

But then, hey: we live in an age of double standards.

Nicely, Melinda Gates is not a nut about the subject, despite her inauspicious beginning. The sexual division of household labor overwhelmingly puts women in the “unpaid worker” category, sure, but this is not just an American phenomenon, and certainly not primarily a phenomenon of “late capitalism,” as collegiate feminists might be tempted to put it.

It turns out that in America, this labor force gender gap is far less than anywhere else.

Yes, America is the most equal regarding paid/unpaid “gender gap.” Women work more time in unpaid labor elsewhere, globally (including Europe) than do men.

What made the change? Not just the sexual revolution. Not feminism. The main driver of this, as Gates makes clear, is industrial, consumer capitalism. The free market.

Specifically: labor saving devices. Plumbing, electricity, refrigerators, modern cooking equipment, the TV dinner — all have contributed to radically reducing the market-wage/“unpaid” household labor gap. And as Mrs. Gates makes clear, the benefit of this accrues to all of us, not just women. The less time women spend on the drudgery of clothes cleaning or water hauling (things now much simplified by complex machinery) the more opportunities open to all.

So, how does this fit with the current political season?

Draw the obvious conclusion: we don’t need a new program . . . to help women catch up . . . elsewhere. Instead, just increase freedom for all, to allow all of us the necessary opportunity to catch up with our own dreams.

Around the world workers need more innovation and, well, free-market capitalism — to free women (and men) from drudgery.