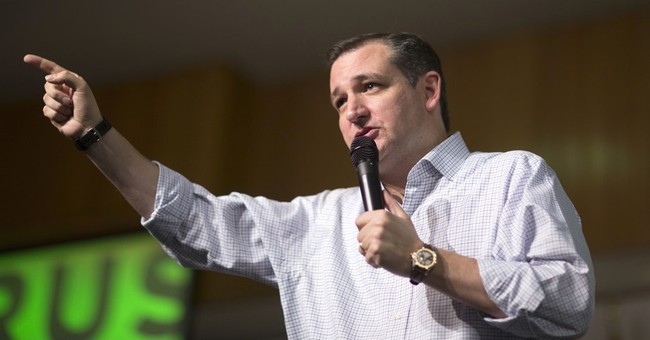 How about you and me?

Take a PolitiFact story last week out of Iowa, where Sen. Ted Cruz (R-Texas) is the current Republican front-runner as the state’s Feb. 1 presidential caucus approaches. Earlier this month, Sen. Cruz told a Cedar Rapids crowd, “The Democrats in the Senate last year introduced a constitutional amendment to repeal the free speech protections of the First Amendment.”

Is this statement true or false?

The constitutional amendment proposed by Sen. Tom Udall (D-N.M.) and voted for by every Democratic Party U. S. Senator states, “Congress and the States may regulate and set reasonable limits on the raising and spending of money by candidates and others to influence elections.”

This new power to be bestowed on Congress, with only a vague, undefined limitation that any new restrictions be “reasonable,” implicitly repeals the part of the First Amendment that reads, “Congress shall make no law . . . abridging the freedom of speech . . .”

There is a mighty big difference between “shall make no law” and “may regulate.”

Sure, the First Amendment also protects non-political speech — or should. And Udall’s constitutional re-write did steer clear of regulating water-cooler talk or enabling federal eavesdropping in bowling alleys or beauty parlors. Still, historically, free speech has been fought for, at the price of blood, not so we can complain about American Idol, which lacks police and prisons, but so we can mock and ridicule or polemically deconstruct the king, the president, powerful members of Congress — those very folks the Democrats’ amendment would empower.

Sen. Udall’s amendment would, indeed, reverse the very meaning of the most meaningful part of the First Amendment’s speech protection.

The fact-checking organization created by the Tampa Bay Times — arguably Florida’s most “progressive” paper — began their “independent” quest to determine the truthiness of Mr. Cruz by calling his statement “a heavy charge.” In fact, readers were informed of the weight of Cruz’s words even before they were told what words he had uttered.

While I agree — Cruz’s contention is heavy, man, real heavy — presenting his argument from that perspective at the beginning of the fact-check review smacks of opinion — spin — not fact.

Hmmm. Instead of using the phrases “sharply weakened” and “existing federal campaign finance laws,” one could perhaps more accurately note that these High Court decisions “strengthened free speech protections” by overturning “unconstitutional actions by the FEC due to unconstitutional speech restrictions enacted by incumbent politicians in Congress.”

Either way, the statements are true. It’s simply that one shows a bias in favor of unconstitutional speech restrictions and the other a bias in favor of the First Amendment as written and against allowing Congress to regulate their own and their opponents’ campaigns.

The Udall amendment would have overturned these court decisions, PolitiFact also tells us, “by explicitly allowing Congress and the states to regulate and limit campaign fundraising and spending and to distinguish between ‘natural persons’ and legal entities like corporations when regulating campaign spending.” The outfit adds, “The text of the amendment makes no reference to freedom of speech or the First Amendment.”

Of course, not mentioning the obvious repeal of the current protection provided for political speech by the First Amendment is hardly a selling point — not unless one favors that the ramifications of a change be clouded, rather than transparent. Moreover, one thing the Democrats’ amendment explicitly failed to do was to overturn those cited SCOTUS decisions. Instead, the amendment would have merely, though awesomely, empowered incumbent politicians in Congress to do as they wished regarding corporate spending in elections as well as all other restrictions and regulations.

The only limit to the Carte blanche powers Congress would have gifted to itself would have been, ironically, the U.S. Supreme Court. Yes, that’s right, the evil High Court that has been so lambasted by President Obama and the Democrats would actually be empowered to check the Congress by deciding what new regulations of speech were “reasonable” and which were not.

Additionally, if the problem is that Congress is “bought and paid for” by corporate interests, as so many Democrats allege, why would they propose to amend the Constitution to empower this same bought-and-paid-for Congress without any explicit limitation on corporations whatsoever?

The wisdom of such a reversal of the clear current wording can, of course, be debated ad infinitum. But what about the truth, what are the facts?

PolitiFact doesn’t know, so it chooses to cite the opinions of folks they declare to be “the experts.”

Stanford Constitutional Law Center Director Michael McConnell and Kermit Roosevelt, a professor at the University of Pennsylvania Law School, both call the Democrats’ amendment “a partial repeal” of the First Amendment.

“I have read the amendment carefully,” writes Harvard Law School Professor Laurence Tribe. “It has no effect at all on freedom of the press, freedom of assembly or peaceful protest.” Yet, in reassuring us about the various portions of the First Amendment not being repealed wholesale, Mr. Tribe’s arguments are hardly comforting.

In fact, Sen. Udall felt the need to write directly into his amendment that, “Nothing in this article shall be construed to grant Congress or the States the power to abridge the freedom of the press.”

In the end, PolitiFact fuzzes up any notion of fact and fiction by relying upon legal experts with whom they politically agree.

“Campaign finance has been linked to free speech in recent jurisprudence,” they admit (though they disagree) and thus PolitiFact concludes that since “a wide range of constitutional law scholars” (with whom they concur) “say the amendment would have a limited or nonexistent effect on speech rights. . . . we rate it Mostly False.”