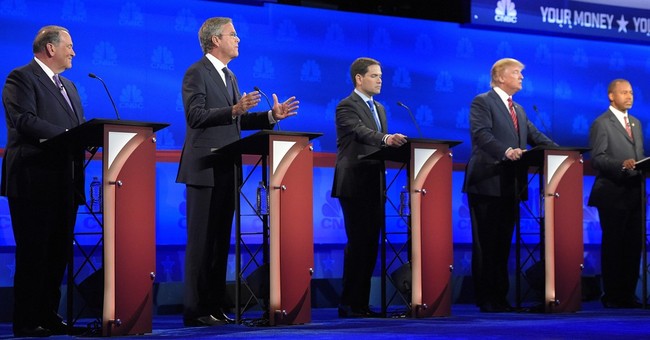 The left-wing slant of the dominant strain of major media was on full display with the snarky questions CNBC’s moderators hurled at the ten Republican presidential candidates during last week’s debate.

Big Media has long leaned so far in favor of Democrats and against Republicans that only when it falls over at its most unfair and unprofessional does it even draw much attention anymore. Between a national press core consistently in the tank for progressive politicians and the constant reinforcement of left-wing narratives from Hollywood and state-controlled academia, it's a mighty tribute to the independent thinking of American voters that a Republican could ever get elected.

Or even be free to walk the streets.

Perhaps the well-deserved tongue-lashing administered on that Boulder, Colorado, stage by Sen. Ted Cruz (R-Texas) will cause some sort of journalistic self-reflection and reassessment. But I doubt it.

You know, the Democrats have the ultimate SuperPAC; it’s called the mainstream media. . . . Last week, Hillary Clinton went before a committee, she admitted she had sent emails to her family saying, “Hey, this attack in Benghazi was caused by al Qaeda-like elements.”

Not merely is Rubio’s statement accurate, but it has far deeper implications when one considers the relentless mainstream media (MSM) drumbeat for greater campaign finance regulation.

If the Federal Elections Commission mutes, by law, voices of the political parties (as has already happened, significantly) and silences issue-oriented advocacy groups — or such groups are prevented by the IRS from even forming in the first place, as has been the case during the Obama Administration — and if Democrats get their way and outright ban SuperPACs (other than, of course, the MSM), who would hold the loudest megaphone?

None of the political speech regulations so enthusiastically promoted by the major TV networks and print press — such as outlawing the mentioning of an incumbent’s name within months of an election or censoring a movie — touch those powerful media outlets in any way whatsoever.

The New York Times and Washington Post and NBC News, etc., drone on ceaselessly that big, bad corporations are a dangerous threat to democracy and must be prevented from spending any money to address politics. Well, except that this somehow doesn’t apply to the big, bad corporations who own the Times, Post or NBC.

Might not the corporate media behemoths, who warn us of the dangers of corporate domination, have some desire to use government regulation to hamstring their political competition and thus protect their own dominance?

Just how far would the MSM and the Democrats go?

Last year, with the usual rip-roaring universal support and encouragement of Big Media, every single Democrat in the United States Senate voted to repeal the essential guarantee of freedom of speech by voting for Senate Joint Resolution 19, a constitutional amendment introduced by Sen. Tom Udall (D-N.M.). Thank goodness it failed, but had it passed and been ratified as part of our Constitution, the words “Congress shall pass no law” would have been blotted out of the First Amendment and replaced with an open-ended invitation for the politicians in Congress to “regulate” campaign spending — and therefore speech — to their hearts’ content.

So sweeping would have been the new power of Congress — a Congress thoroughly despised by Americans of all political persuasions — that the authors of SJR 19 felt the need to state unequivocally “Nothing in this article shall be construed to grant Congress or the States the power to abridge the freedom of the press.”

Big Media is snide, yes, and smug and condescending, too. But it is also a major force promoting big government, always willing to attack anyone who advocates the very idea of a constitutionally limited government.

That is, except when it comes to the constitutional protections for Big Media.