Until We see Their Faces

Paul Greenberg
|
Posted: Jul 17, 2018 3:30 PM
Share   Tweet
The opinions expressed by columnists are their own and do not necessarily represent the views of Townhall.com. 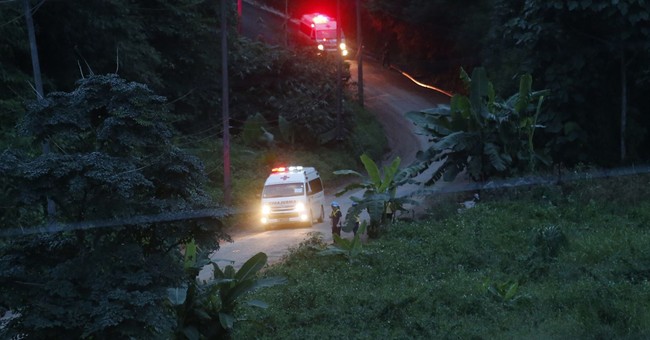 Again and again, brave Thai divers plunged into the murky waters of a flooded cave to search for a soccer team and its coach in the dark depths. At last, after days of tension that seemed to last forever and drew the attention of the whole world, the official in charge of this complex international rescue mission was able to announce a triumphant breakthrough: "After days of waiting ... we saw the boys' faces" -- and a reflection of our own features in theirs. The destiny of the boys in the cave had drawn all of us together like one family -- the human family.

There was high drama as public opinion around the globe followed every suspenseful detail. "The operation went much better than expected," said the chief of this rescue mission. As for the cave-divers, "They hugged the boys beneath them while they were wearing full-face masks."

Yes, give 'em a happy ending every time, though this was scarcely the end of the story or even much of a beginning. For much work remained to be done. Visibility inside the cave was close to zero at some points, but these heroes weren't deterred by the darkness or the dangers present down there in the bowels of the earth.

Of the 90 cave-divers, 50 were foreigners who had stepped forward to join this Mission Impossible -- evidence that a crisis can bring out the best, not just the worst, in our human family. We might have our long-standing resentments and jealousies ("Mama loved you best!"), our sibling rivalries and quarrels. But when push comes to the inevitable shove and outsiders threaten our solidarity, we're prepared to stand together against the whole world if need be.

For we also know that divided we fall, and united we stand. Because whatever happens, however riven or neglected, frayed and tattered, shattered and splintered, we are all united, whatever our tribe or clan. So let us sink or swim, together, caring for one another till the end, whatever it turns out to be. Man the Voyager, not so different after all these eons remains His creature, and must account one day to the Creator himself. And will prevail.

William Faulkner said it: "I believe that man will not merely endure: he will prevail. He is immortal, not because he alone among creatures has an inexhaustible voice, but because he has a soul, a spirit capable of compassion and sacrifice and endurance. The poet's, the writer's duty is to write about these things. It is his privilege to help a man endure by lifting his heart, by reminding him of the courage and honor and hope and pride and compassion and pity and sacrifice that have been the glory of his past. The poet's voice need not merely be the record of man, it can be one of the props, the pillars to help him endure and prevail."

So whether it is a lonely cave-diver or the organizer of a vast international effort to save one soccer team, he needs to keep pressing on with no boundaries of race or tribe to block his way. Thank you, cave-divers, for reminding all of us of our duty and our calling: to let the light shine in dark places and so eventually illumine the whole of His creation. May there be many more such lessons to teach us how to live and, when necessary, how to die in a cause worthy of man and his God.