Paul Greenberg
|
Posted: Jun 12, 2017 7:50 PM
Share   Tweet
The opinions expressed by columnists are their own and do not necessarily represent the views of Townhall.com. 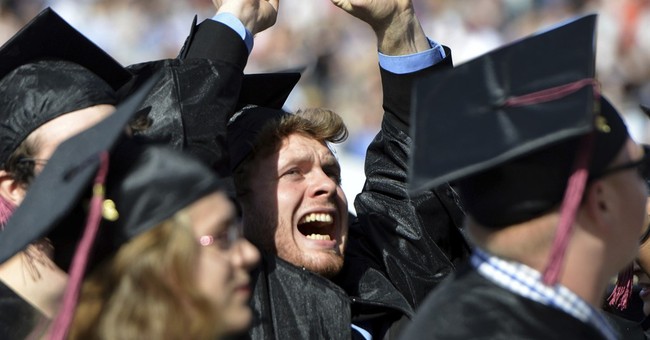 It's not just a source of debate about education here in Arkansas but about American education in general. For a simple national test indicates that, at a couple of hundred colleges across the country, at least a third of the senior class couldn't make a coherent argument for or against a thesis or evaluate the quality of the evidence behind it. Or understand the meaning of information presented in a graph or table.

That conclusion was reached on the basis of a test called the College Learning Assessment Plus. The title is impressive, but the test may be simple-minded. For how assess the quality of a student's education by using a test that doesn't include a sit-down with the graduate (sometimes called an oral exam) that would probe the extent of his knowledge, intuition and understanding?

Prospective employers across the country might do well to ask the same question, for a survey of bosses reports that half of them say the college graduates they hire aren't prepared for the challenges they face in the marketplace. And that the big problem with these new hires is that they lack the ability to think critically.

"At most schools in this country," says Josipa Roksa, a sociology professor at the University of Virginia who co-wrote a book about College Learning Assessment Plus in 2011, "students basically spend four years in college, and they don't necessarily become better thinkers and problem-solvers. Employers are going to hire the best they can get, and if we don't have that, then what is at stake in the long run is our ability to compete."

The emphasis of the political establishment in this state has been on equipping Arkansas' college graduates for what the market demands at the time, even if that means pounding many a round peg into a square hole. That blunt objective may not demand anything but brute force. On the other hand, if the object of higher education is really higher than that simple-minded goal, education should broaden and elevate its subjects' minds, not limit their ambitions to being a suitable respondent to the kind of Help Wanted ads found in the newspaper you're now reading. But if the object is to raise their intellectual abilities, there may be a way to do it. It's called a liberal education. And the best schools, state or private or church-affiliated, do just that.

The best way to graduate the best of students in this state is to select the best students in the state to begin with, which is where the best high schools enter the picture. And one of the most promising developments in education has been the emergence of the charter school. For it has incentives to do the best it can by its students: its own survival. It either fulfills the terms of its charter or it's no longer in business. What a great innovation that kind of spur would make on the college level.

But how tell whether colleges are striving to meet higher standards if no consensus exists about their object? Is it just to fill today's job slots, or to turn out graduates who understand that education is a lifelong process and have the capacity to govern themselves? It's the difference between making a living and making a life. A job may be a necessity, but it shouldn't be confused with a calling. The educated mind will know the difference, and the most fortunate among us will find that their work is also a labor of love. But how prepare for such a happy ending while still in school? Which schools are best at it and how find them?

"When it comes to how students select a college, we are clueless about quality," says Tony Carnevale, who directs the Center on Education and the Workforce at Georgetown University. "The proxy we use is reputation." But the best known schools aren't necessarily the best. The Citadel in Charleston, S.C., says its mission is to assure that its graduates "are capable of both critical and creative thinking ... and possess the methodological skills needed to gather and analyze information." Which is a tall order indeed. Has it accomplished that mission? Gentle Reader can be the judge by listening to what Jenna Adair, a professor of English there, says of her sophomore students, who are told to read "Beowulf" and then pretend they're journalists covering a presidential race between three of that epic's characters, assessing each one's capacity for leadership. "A lot of students beg me to give them the answer," she says. What they've done is to confuse higher education with just mental regurgitation.

Not everyone has the makings of an officer and a gentleman, let alone a statesman and visionary with the courage of his convictions and the determination to fight for them, but all should be given the chance. And a head start by being taught how to think. And how to conduct themselves. Which may be both the first and last attainment of an educated mind. And a disciplined body to go with it. And when the cadets at the Citadel are handed their prized degree, allow us to nominate the speaker at their commencement: He's a role model out of Arkansas -- both a captain in the U.S. Army and a member of the U.S. Senate. We're thinking, of course, about Tom Cotton, who has demonstrated he knows how to think.