Paul Greenberg
|
Posted: May 08, 2017 7:47 PM
Share   Tweet
The opinions expressed by columnists are their own and do not necessarily represent the views of Townhall.com. 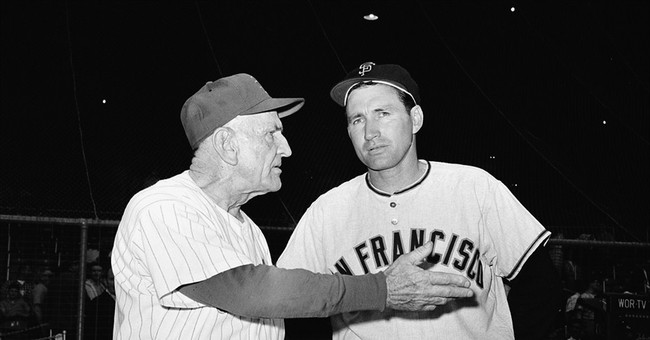 He was the most improbable and entertaining of sages, but Casey Stengel's life and the man's boundless love of it still holds up -- even in an era in which baseball, the thinking man's game, has been replaced by brutish football as the national pastime. For ours is an era that may drown us in soulless data while ignoring the zest, the beauty and sheer joy of life.

First, just the facts, ma'am, as Sgt. Joe Friday used to say on a television series back in the long-ago: Yes, there was a time when Casey Stengel, the old professor, was young Casey -- a 19-year-old outfielder and clean-up batter, traditionally fourth in the lineup. He played his first game of pro ball for the Kankakee (Ill.) Kays in the Northern Association even though the team soon got to be known by another name, the Kankakee Lunatics, which is a story in itself. That strange honorific honored the sprawling 119-acre Kankakee State Hospital, formerly the Illinois Eastern Hospital for the Insane, just across the street from the ballpark. Its occupants could watch the game from their windows while the fans in the bleachers could watch the occupants watching the game. Was this a great country or not?

"Stengel is one fellow who won't be here next year," a teammate of his named Joe Gilligan prophesied after the ball club won its season opener 7 to 6. How come? Because young Stengel was surely on his way to the majors? "No," responded the astute Gilligan, pointing to the adjoining asylum, "he's going into that building over there." It was only a matter of time, his buddies on the team agreed. For they were well acquainted even then by his remarkable plays in the field and his verbal infelicities off. But if this jug-eared, big-beaked young man was crazy, it was crazy like a fox. For his fractured language made good copy for the local sports pages while his plays earned admiring coverage. And he would go on, in a career that spanned decades, to lead pin-striped teams to seven world championships and 10 appearances in the World Series -- not a bad record for someone who started off as a Kankakee Lunatic.

In professional sports, it doesn't make an athlete's reputation to be known as daffy (remember Daffy Dean?) but it certainly helps. If there is a single term that sums up Casey Stengel in the annals of sport, it is showman. His presence in the lineup could fill a stadium while his wit and wisdom filled more than one book. Long before there was a Yogi Berra, he could knock the hide off a baseball and the socks off the American language.

Yet there was a wisdom to ol' Casey's misnomers that not only entertained but enlightened, as in:

"The secret of managing is to keep the five guys who hate you away from the guys who are undecided."

"The trouble is not that players have sex the night before a game. It's that they stay out all night looking for it."

Connoisseurs of this art couldn't wait to hear what in the world he'd come up with next, as in these gems:

"All right, everyone, line up alphabetically according to your height."

"I was such a dangerous hitter I even got intentional walks during batting practice."

"Old-timers, weekends and airplane landings are alike. If you can walk away from them, they're successful."

"They say you can't do it, but sometimes that doesn't always work."

"There comes a time in every man's life, and I've had plenty of them."

And so mysteriously, laughably, interminably on, for ol' Casey, like the young one, always left 'em laughing. Or at least completely mystified. On balance, the man was unbalanced -- and it was a delightful thing.