Paul Greenberg
|
Posted: Aug 30, 2016 12:01 AM
Share   Tweet
The opinions expressed by columnists are their own and do not necessarily represent the views of Townhall.com. 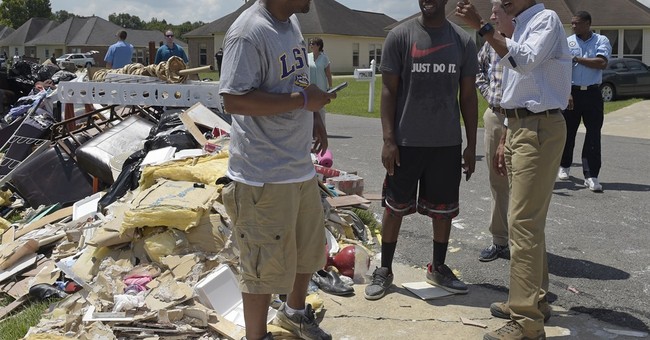 Mr. President, you're doin' a heckuva job. Which is what another president -- George W. Bush -- told his man on the scene before the political roof fell in after Katrina struck New Orleans. But if truth be told, as it often isn't in politics, the bayou state doesn't need more feel-good statements after a natural disaster. Not after it's been mugged by watery reality yet again. But here was the Hon. Barack Obama issuing the familiar false comfort when he came to visit the water-logged scene of still another natural disaster.

"This is not a one-off, this is not a photo-op issue," this president solemnly declared on making a photo-op stop. "I know how resilient the people of Louisiana are and I know that you will rebuild again." Only to be wiped out again, he might have added.

"These are some good people down here," said the president. "They got a lot of work to do and they shouldn't have to do it alone." And they aren't. Not just water is flooding into Louisiana but help from church people all over the country. They really don't need politicians and PR types getting in the way. Including a master of the political game like Barack Obama.

Meanwhile, help isn't just on the way. It's arrived. The contrast between political words and loving deeds was hard to ignore at the Saintsville Church of God in Christ across the street from the airport where Mr. Obama had arrived. Volunteers were unloading a truck full of much-needed supplies from a church in Milwaukee even as the presidential motorcade, sirens blaring, was preparing the president's grand entrance.

This president has played this familiar game before, but from the opposite angle. When he was only a presidential hopeful instead of an occupant of the Oval Office, he lambasted George W. Bush for what he called that president's failure to respond soon enough or effectively enough to a hurricane's wrath. But now we're all supposed to believe he's above politics when his record often enough shows he's below it.

Of all people and politicians, it was Hillary Clinton who issued a statesmanlike announcement saying she planned to visit south Louisiana "at a time when the presence of a political campaign will not disrupt the response, to discuss how we can and will rebuild together." Or even not rebuild, for as the Good Book says, "To everything there is a season, and a time to every purpose under Heaven. ... A time to weep, and a time to laugh, a time to mourn, and a time to dance." A time to build and, in New Orleans' case, a time not to. Like now.