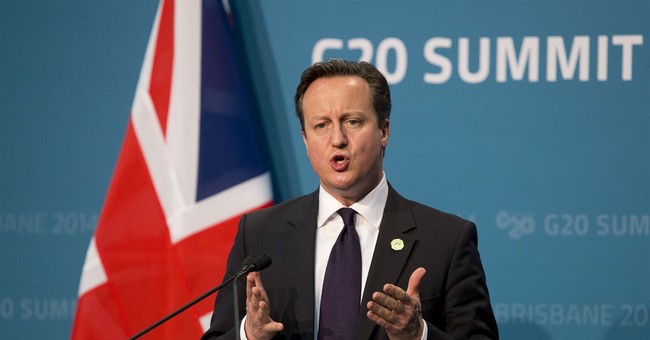 The rage for secession continues to sputter -- from Scotland to Catalonia -- and to threaten long-established political systems that have preserved peace and stability by keeping nations unified.

It was a damned close-run thing, as Wellington said of Waterloo, when just this September the Scots finally let their prudent judgment overcome the rash temptation to secede from the United Kingdom. Yet almost half of Scotland's voters were ready to declare independence and plunge into uncharted waters. With who knows what consequences for their future, let alone all of Britain's.

Now the long restive Catalans have held a purely symbolic vote to secede from Spain -- no matter what the Spanish constitution may say. Since the results really didn't count, happily, it was easy enough to cast a ballot for an independent Catalonia in a rump election. It was a stirring gesture, but it's a good thing -- for the Catalans and the rest of Spain -- that it was only a gesture. Long-standing institutions, and governments, should not be overthrown in a fit of passion and pique.

Those who secede in haste may find themselves repenting at leisure. Just ask any Southerner, for the legacy of this country's terrible civil war -- division and destruction -- still haunts these latitudes. And most of us have sworn: Never Again. Who now would want to be anything but an American?

A major reason why the Scots snapped out of their secession fever just in time was the adroit maneuvering of the United Kingdom's beleaguered prime minister, David Cameron, who didn't just oppose Scottish independence but offered a feasible alternative: more home rule for Scotland. Devolution is his term for it, and it would apply not just to the Scots but to the rest of the four-nation kingdom -- Wales, Northern Ireland and even England itself. The devil still lurks in the details, but the prime minister's vague promise to decentralize the British system has kept the United Kingdom united.

Britain's prime minister recognized that a powerful idea, however bad, will beat no idea at all. So he came up with one that appeased enough Scots to avert the danger of secession. But now he's got to deliver, and figure out a balance between Britain's centrifugal and centripetal forces, the center and the rim, that keeps the wheels of government running. Not an easy problem to solve, or even ameliorate.

It's the same challenge that a group of American leaders faced after a decade of independence that saw constant crises -- for these new united states were anything but united, and the old Articles of Confederation were proving anything but adequate to the challenge. States were veering off on their own, passing their own tariffs and even printing their own, easily inflated currencies. Everything from the common defense to a common economy was crumbling. Historians used to call that sad period of American disarray The Critical Period, and critical it was. How deal with the crisis?

What a remarkable generation of Americans did, the same generation that had won the Revolutionary War, was to win the peace by drafting a new constitution that would create "a more perfect union," to quote the preamble of the new constitution they would devise in Philadelphia in the stifling summer of 1787. That now old Constitution has weathered every storm since, if just barely at times, including the Late Unpleasantness of 1861-65.

With leaders like Washington and Hamilton, old Ben Franklin and young James Madison, that constitutional convention and coup could not fail. And it didn't. For which successive generations can be always grateful. It was a British prime minister of the next century -- William Ewart Gladstone -- who looked back on the Founders' work at that critical moment and described the Constitution of the United States as the greatest work of man ever struck off at a given moment in time.

Yet today we regularly hear that clockwork system designed more than two centuries ago called "dysfunctional" because the country's two great political parties may find themselves at loggerheads from time to time. ("The biggest and most serious problem facing our nation today is the dysfunction in our political system in Washington...."--Senator Mark Pryor of Arkansas, defeated in his bid for re-election this year, in his farewell speech in the U.S. Senate.)

Yet the system is working just as the Founding Fathers intended. For they preserved the will of the people as the ultimate source of political authority while dividing its execution into so many parts, state and federal, legislative and executive and judicial, centralized and decentralized, that there was no danger of one party -- or faction, as the Founding Fathers called political parties -- rushing through hasty and ill-considered policies.

If it's not too presumptuous, our cousins across the pond might look over here for a model to follow when it comes to refining their unwritten constitution to meet the challenge of this uncertain era and the secession fever it has spawned.

Whether it's the future of the United Kingdom or of the United States under discussion, the same wholesome principle should apply. It was Daniel Webster who summed up that principle in his time: "Liberty and Union, one and inseparable, now and forever!"