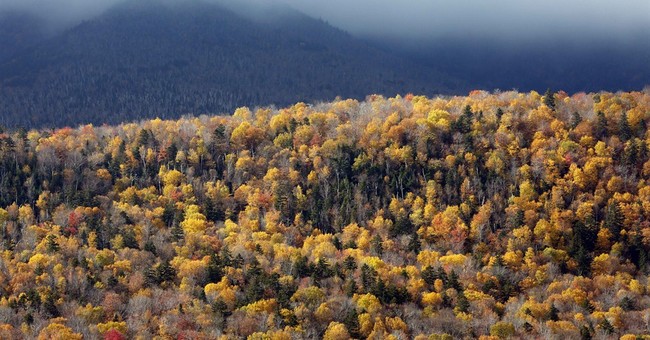 Leaning on his cane, the old boy walked out his front door, took in the morning light, and was surprised. That's when the realization hit him: The weather's turned. It's cool. He felt it, but couldn't quite believe it, not at first. It had been a light summer this year, with plenty of rain and cooling breezes. It hadn't been unbearable, like some he had known. But still it had been summer in these latitudes: hot. And now...

Fall had taken him by surprise. It shouldn't have. It happens every year. And every year it still surprises him. The suddenness of it, the relief, the delight. There ought to be a blessing, he thought. Then he realized there was: Blessed by the Lord our God, king of the universe, who hath preserved us, sustained us, and allowed us once again to reach this season. Amen.

October, real October, had finally arrived. A little late, maybe, but all the more welcome for that. October in Arkansas would give Heaven a run for its money -- and then some. The sun shone off the leaves as they skittered across the yard. These were only the first to fall. The great pin oak in the front yard had scarcely begun to turn, but its leaves were already making their appearance all around the house. And inside it, too.

He'd spotted a couple of leaves in the shower the other day. How did they do it? How did they manage to make it inside in such numbers and in so many places so early?

It was a mystery to him. Every fall. He didn't mind raking them up, not yet. They were still a novelty -- a welcome sign that the seasons still turn in these latitudes.

Just when he was getting hot and tired toward the end of his morning walk, a deep patch of shade would providentially appear ahead, accompanied by a mild, cool breeze. He stopped there to rest, and look up. There wasn't a cloud in the sky as the leaves kept falling, falling ... slowly, slowly in no particular order. Some were so classic in outline they could have fallen not off a tree but the Canadian flag. He resisted the temptation to stoop down and pick up the more elegant ones, or his walk would take forever.

It was happening all over Arkansas. He knew it'd been fall for some time up in the northwestern corner of the state: Fayetteville, Rogers, Bentonville, Lowell -- aka The Midwest.

Fall in all its fullness may still not have come to the southernmost parts of the state -- Texarkana and El Dorado and points Southeast like Pine Bluff and Lake Village -- aka the True South.

Last time he'd driven through Lake Village, the heat still shimmered off the new/old plantation house that had been restored at Lakeport. It rose just off the highway like a dream, a vision of the past. It could have been 1859 again, which is when the original house had been built -- just in time for the ruination called The War. Those who built it could not have foreseen the devastation about to come.

In the late 1850s, cotton was bringing an average 11.4 cents a pound, the highest it had been since the boom years of the 1830s. Optimism was as endemic along the swampy banks of the Mississippi as malaria. Old Man River flowed past the plantation like a super-highway to New Orleans and the world's markets. All good things beckoned, at least for the cotton aristocracy. Cotton was king and its kingdom swelled with pride.

The high, two-story house set in the midst of the cotton fields would have been a testament to the Delta's prosperity and its promise of more to come. It had 17 high-ceilinged rooms, and a two-story portico in front with tapered white columns. And 11-foot-high wood-paneled doors throughout.

The whole structure was supported by great cypress beams from the adjacent wetlands, and came complete with a 26-foot-long entry hall just right for grand entrances. Lakeport was made to show off. It could have been Tara in "Gone With the Wind."

How could its master, the good Lycurgus Johnson, have foreseen what the near, disastrous future would bring? By the time the surrender was signed at Appomattox some six years later, the countryside had been torn apart by guerrilla warfare, and freebooters of every allegiance or none roamed freely, taking everything, destroying anything left.

The remnant of the great army that had fought the War now limped home. Tattered and torn, those survivors who somehow had made it home from the various fronts would find little but desolation waiting for them.

The tax rolls from 1855 to 1865 tell the story: from pride and plenty to nothing to declare. Now that the grand old house has been restored, you can almost see the ghosts taking in the last, lost hopeful air of that long-ago summer of 1859....

But this was 2014, and this morning fall had finally arrived here in the middle of the state, for Little Rock is right on the cusp between Mountain and Delta South. Here fall was new, and would stay new for a blessed while. The old boy breathed deep. And shivered. He went back inside for a jacket, the first time he'd had to wear one this season. It felt good.

All was perfection and yet ... it wasn't. He should have been delighted. And he was, but only in an abstract way, the way you are when you know how you're supposed to feel but don't, not really, not all the way through. He was resentful. It took him a moment to realize why. It wasn't the coming of fall he resented. Goodness, no, that couldn't be it.

No, it was the passage of time. The sun shone bright, but for a moment mortality had cast its shadow. The beauty of the physical world in its new aspect only brought home the transience of things. He looked about and thought: How he was going to miss all this. To every thing there is a season, and a time to every purpose under the heaven. A time to be born, and a time to die....

Once he had put the feeling into words, it was gone. Resolved. He understood, and to understand is to accept. Now he was free to enjoy the brisk air, the good feel of the jacket on his back, the old neighborhood all new again in the cool air.

All the oh-so-important things he had to do today, which had so pressed on his mind when he'd gotten up and run through his schedule, and wondered how he was going to get all that done, and in what order ... all that was gone. Once he'd stepped outside, none of it mattered any more. Everything fell into place. A sense of proportion, of perspective, of peace and promise, returned.

The Book of Ecclesiastes has it right, from first to last: Vanity of vanities, saith the Preacher, vanity of vanities, all is vanity. ... Go thy way, eat thy bread with joy, and drink thy wine with a merry heart. And off he strolled into the golden fall. It had finally got here. It was definitely, finally, wholeheartedly here. It was October in Arkansas. Heaven had arrived.