A Line Out For a Walk 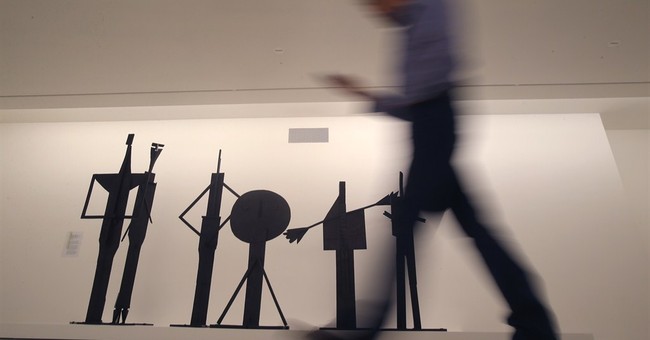 The first thing you may notice once past the double doors of the current exhibit of line art at the Arkansas Arts Center isn't anything on exhibit. It's an old outside wall that became an inside one when the museum was expanded in the 1960s, and its designers had the good judgment to preserve this fine example of WPA-style modernity circa the 1930s. Anything less would have been an insult to history -- and just good taste. They don't make walls like that anymore. Mod museums specialize in the blank. Ornamentation is out. It reveals too much character.

The 12th National Drawing Invitational now showing at the museum -- it runs through Sunday, October 5 -- couldn't have a more elegant backdrop than that old but ever new wall. Sometimes the worst of times can produce the best of arts. Necessity isn't the mother of just invention; it can be the seedbed of art, too.

There's a lot that today's overpriced and overpaid starchitects could learn from the starving artists whom the New Deal subsidized through the Federal Art Project (1935-43). Like the beauty of classical representation rounded not just to fit the spirit of the times but to create it. Even now age cannot wither nor custom stale the old wall's appeal, which grows greater with the passage of Time, art's surest judge.

Below its spacious windows the art-deco wall frames Gary Kachadourian's triptych, "Three Scenarios in Front of Cinderblock Wall and Sky," in which the beauty stops at the gray cinderblocks -- but continues above them in a kinder, gentler, more luminous blue-gray. Think of Miles Davis' classic "Kind Of Blue," which goes winding from elegance to elegance.
CARTOONS | AF Branco
View Cartoon

On an adjacent wall are the beautifully simple model drawings -- a bike-rack gate, a Raleigh Grand Prix Model DL 115 bicycle of about 1973, an ATM sign -- that will be enlarged and lined up on the cinderblock background across the way like the subjects of a firing squad. It's a dramatic example of how the background of a piece of art changes it.

There's also a kind of art that's background -- like Andrea Way's quilt-like patterns, one of which is indeed beautiful if its many layers are studied closely. But who wants to get that close?

The best of the artist's work is surely her (very) "Grey Lagoon," but even it dismays. So much trouble to produce so much sameness. It brings to mind Oscar Wilde's ultimatum on his deathbed: "Either that wallpaper goes or I do." He did. Maybe driven to it by a background that should have stayed in the background.

Who says line art can't be sensual? See the fine, bold drawings of Ian Jehle, who updates the Victorian spirit of Aubrey Beardsley's beautifully detailed 19th-century engravings to pencil and casein on paper. Which changes everything but the sensuality as refinement gives way to its opposite in the explicit spirit of these different times. Even lasciviousness alters its style with the passage of time and fashion.

To quote the plaque on the wall next to an immense drawing of a couple tongue-kissing: "Striking in its massive scale, 'The Collectors' amplifies a private moment shared by the married couple."

Put aside the question of a how private a moment can be considered when it is the subject of a huge drawing to be hung in a public space. What caught my eye was the detail in the text assuring us that the couple was married. Propriety is not yet dead. It's as if the text accompanying a description of a Madonna and Child at the Cloisters were at pains to note that the Holy Mother was betrothed.

The line drawing in all its varieties is a whole school of art in itself, full of divisions and subdivisions, schools and schisms, solemnity and silliness, and most of all elegance. Which may be why an editor of a certain age, who never could stand the gray halftones in which photographs were reproduced in his day, always preferred line art on plain white newsprint. The purity of it. And at the same time the playfulness of it, at least when executed by an artist who understands his medium, especially how its limitations can become its strengths.