Howard Baker, Man in the Middle 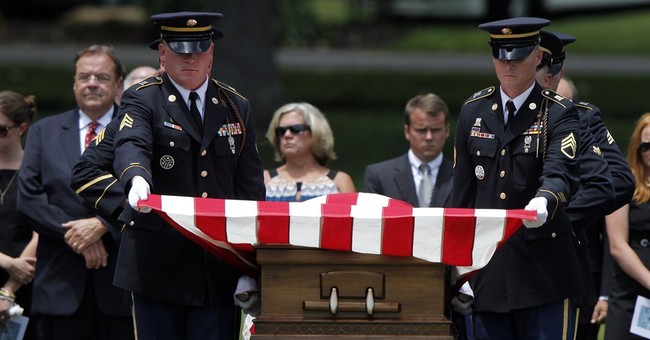 The news that Howard Baker had passed at the age of 88 set off a kaleidoscopic swirl of memories, impressions, recollections and reflections -- so many it was surprising, for he was not a particularly memorable politician, and certainly not a colorful one.

On the contrary, Howard Baker's great strength was an ability to meld into the background, to mediate between the political stars of his time, to serve rather than lead, to be the gray between black and white opposites, always the man in the middle, the one in the background when a president signs a bill into law, the chief of staff and not the chief executive.

Howard Baker was the great compromiser, conciliator and facilitator -- never the leader. He was everybody's No. 2 choice, the ideal vice president, but nobody's favorite for No. 1. Not even his own. Even when he ran for president, he didn't seem all that enthusiastic about his own candidacy. He shied away from the immodesty of it. As he once told the rival candidates at a forum, "I don't know about the rest of you people, but one of the requirements of running for president apparently is that you incinerate any remnant of modesty that's left in your body."

Winston Churchill, who was never in the middle on any question, once described his rival Clement Attlee as "a modest man with much to be modest about." Howard Baker was a moderate with much to be moderate about, which was his great strength at a time when immoderate passions held sway. His talent for genuine moderation -- not the sort that is simply the absence of principle -- was as useful in politics as it still is rare.

Howard Baker's great virtue was that he was no zealot. His great vice may have been that he had no zeal, either -- and it is hard if not impossible to recall any great political leader who didn't have that quality, who didn't have what George H.W. Bush once called "the vision thing," a construction that only someone without it would use to describe the indispensable quality a great leader must have.

Sen. Baker was great at what he was -- a skilled politician who had a gift for moderating the too-bold views of others. But no one would have confused him with the star of the show, however great he might be in a supporting role. His specialty was to step in for the star at that critical moment when the leading man's charisma had worn thin and he was in danger of losing his audience. That's when Howard Baker would save him from his own passions.

That's just what a great leader may need from time to crucial time: a Howard Baker to calm things down, restore perspective, give sanity a chance, and let the star regain his equilibrium without losing his zeal. That's what Howard Baker did for Ronald Reagan, a great president who had stumbled into less than great decisions that had left him at the mercy of the hard-driving Oliver Norths and Don Regans of his administration, who could be as reckless as they were feckless.

Left surrounded by the wreckage of the Iran-Contra-arms-for-hostages tangled affair, the Gipper did have enough presence at that low point in his presidency to reach out for the one man who could save his administration and reputation, the ever moderate Howard Baker, who was never moderate about serving his president or his country. Whatever personal ambitions of his own he might have had, he could put aside or forget entirely.

Rather than slide into another failed presidency, Ronald Reagan picked up the White House phone and put in a call to Howard Baker. He got Mrs. Baker instead, who explained that her husband was out for the moment, having taken the grandchildren to the zoo. To which President Reagan, never at a loss, replied: "Do I have a zoo for him."

He did indeed. At which point Howard Baker stepped in to tame the lions, clean out the cages, see that the clowns didn't run the whole show, and generally play the role of ringmaster, moderating influence, and the chief of staff who got the whole zoo organized again. He not only saved the day but the last years of the Reagan presidency.

But it was as a senator that Howard Baker may have left his most enduring and still highly relevant legacy. Naturally, it was in the form of a question rather than anything so immoderate as an outright statement. It was as a member of the Senate Watergate Committee in the troubled summer of 1973, a role in which he was expected to be nothing more than a defender of his friend and patron Richard M. Nixon, that Sen. Baker posed a simple, fair and ultimately the essential question of the whole affair: "What did the president know, and when did he know it?"

Everything else about one of the great scandals, turning points, revelations and in the end redemptions of American history unfolded from that point on in answer to his question.

The discovery that the United States of America could have so corrupt a president that he corrupted all around him would in turn lead to the rediscovery that the country still had the courage to address Howard Baker's question -- wherever it led -- and the resilience to demonstrate that the system still worked. All in response to one question from one senator.

Howard Baker's question resonates even now, for it remains as relevant as it was during Watergate, which has passed into history only to be succeeded by other scandals with other names -- from Benghazi to the IRS -- that raise the same essential question Howard Baker did then:

"What did the president know, and when did he know it?"