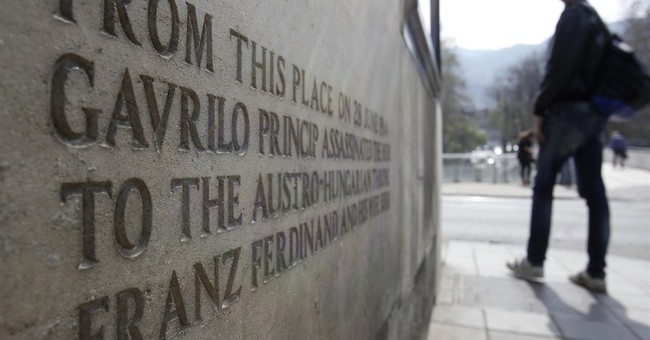 It started as a day like any other a hundred years ago, but before it was out, it would have ushered in a century of war, revolution, terror and mass murder like no other.

For today, June 28th, is a dark centennial. It's the 100th anniversary of the day the world ended, or at least the ever more progressive world that was almost taken for granted back then. For every day in every way we were getting better and better! Till it was only a matter of time till before we were the best! The future beckoned like a golden dream. A dream made of fool's gold.

Today, June 28th, is the unbelievable day the dream would start to turn into dust and ashes -- and blood. It happened in a provincial capital called Sarajevo in what was then the Austro-Hungarian empire -- the second largest in Europe after Russia, and another realm that, like yesterday, is no more.

The archduke Franz Ferdinand, heir presumptive to the Austro-Hungarian throne, was in town and all was festive. He and Duchess Sophie rode in an open car through streets that echoed with cheers -- and where a series of assassins, six in all, waited along their route to do the bidding of a Serbian terrorist organization, the Black Hand. (Al-Qaida was scarcely the first terrorist threat in history to set off a war.) One terrorist who threw a bomb missed, but another took deadly aim with a semi-automatic pistol, a Fabrique Nationale Model 1910, first hitting the archduke in the jugular, then the duchess in the abdomen. And the bloody deed was done. Both would be dead before they could be brought to the governor's residence for medical treatment.

It was a tragedy, but no one expected it would lead to war. There had been other notable assassinations in those years, and they weren't confined to Europe. See the assassination of an American president, William McKinley, at the turn of the century. But a war? Especially a world war? Unimaginable.

The news scarcely made an impression even in Austria. That night the usual crowds in Vienna listened to waltzes as they drank wine. It was just one more assassination. No one could have foreseen the worldwide cataclysm it would unleash. Yet as the days passed and negotiations sputtered, mobilizations replaced them, and one led to another as each took its place in the simmering chain of events, like assassins along a road, or sticks of dynamite planted in a row. And the unimaginable became the all too actual.

What was first called the Great War, for there had been no greater till then, proved only the first and lesser introduction to a whole century of war, revolution, terror and mass murder. As great a tragedy as the First World War was, it would be followed by an even more disastrous Second. And it would bring the old, and even then only perilously stable civilization of the preceding centuries to a terrible end. That terrible century marked the end of any illusion that man's progress is inevitable, automatic, a sure progression. Or it should have.

Now a new world disorder takes inchoate shape under leaders who won't lead. And as America withdraws from the world, the world still declines to withdraw from us. And there can be no more certainty about the results now than there was on June 28th a century ago.

The war that began a hundred years ago today brought with it a flight from any idea not just of meaningful progress but a flight from meaning itself. For men took refuge in nihilism, in non-meaning, (Sound familiar? See this era's craze for po-mo, or postmodernism.) Others took up one fanatical ideology or another in place of philosophy. And each claimed it was The Wave of the Future -- foreordained, sure, and violent. The war that began a hundred years ago today would give birth to monstrous mass movements like fascism and communism, which were so alike while proclaiming their difference and even mutual hostility.

The 20th century would see another, and by now familiar flight -- a flight from God. It was George Orwell who observed that the great difference between the years before and after the First War was a loss of everyday belief. And we still seem to be searching for some God-substitute. For man is the animal that prays, and as we lose faith in God, we still go a-whoring after strange gods, whichever Baal or Ashtaroth is in fashion these days: Power, Reason, The State, Art-and-Culture, Climate Control, pick your poison great or small.

The First World War would kill more than 9 million combatants, and leave twice as many wounded, maimed, never whole again. And that doesn't count the civilian casualties. Or the influenza pandemic that would sweep the world in its wake. Great empires would totter and fall -- like good Franz Joseph's Austro-Hungarian empire. The far-reaching Ottoman Empire would collapse, too, setting little nationalities or new little countries with artificial borders free to war against each other. The result: a spasm of worldwide violence that has not ended yet.

The First World War would prove only a preface to the even more deadly and destructive Second, and we still wander lost in a world we did indeed make. We search for a way to get back to June 27, 1914, the day before the world ended. But that world is beyond our reach now, gone forever, God help us.

Leah Barkoukis
Did Jerry Nadler Have An Accident on Live TV?
Matt Vespa
McCarthy Warns Pelosi What Could Happen If She Pushes Impeachment Again
Leah Barkoukis
When It Comes to Senate Democrats, Joe Manchin Shows Why He's The Only Voice of Reason
Matt Vespa