What Changes and What Doesn't 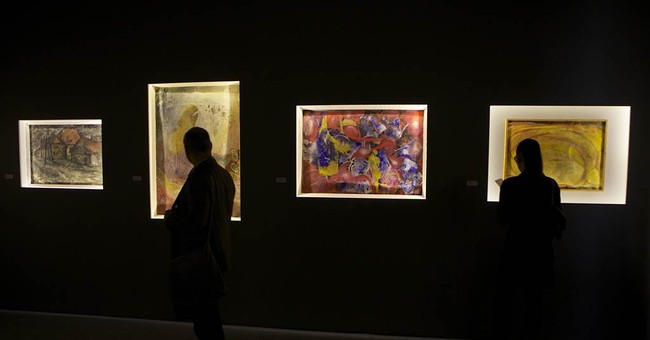 "Appeal or success?" he wanted to know.

Appeal. Success comes and goes. Like popularity. Or any other fad. Success is the thing that does not stay. It is an unworthy consideration. If it is based only on the desire for success and nothing more.

Appeal stays. It may even endure -- if it is Carroll Cloar's kind of appeal. Even grow. As his appeal does. Because it expands to something far beyond success. That is why there is a point at which almost any kind of endeavor becomes an art, and those who practice it artists. As with a fine surgeon or diagnostician, craftsman or engineer, teacher or scientist.

It's been said that art is science in the making, though the saying always struck me as backwards: Science is art in the making. It can be only the first formulaic steps toward intuition, toward an instinctive understanding.

For an example of science perfected into art, see anyone described as a natural in his profession, whether it's fixing shoes or playing second base. Or anyone who has a calling and responds to it wholly. Not just preachers are called.

There is the painter who produces only for the market and the moment, and the one who can turn a moment into an eternity, and lets us see it. A painter like Carroll Cloar.

Yes, artists have their passing phases. They wax and wane like the rest of us. As did Carroll Cloar. What saved him, and saved him for us, was an integrity, a wholeness that he never let go of. What he knew, he knew. What he didn't know, he had the sense to leave alone, even if he might dabble at it briefly. He kept coming home -- to home ground, literally. This is called growth, soul growth, and not just development.

Something was lost when Carroll Cloar switched to acrylic paint, perhaps because something was gained: a decorative sheen and ease. But his earlier paintings in tempera (1955 to 1965) grow ever more powerful with the passage of time, perhaps because they seem apart from the passage of time. The figures in those paintings may be dissolving in the powdery air yet they remain in the unforgetting mind. Because they have the ever elusive but never gone feel and texture of time, for which there is no adequate substitute.

Whatever his travels and adventures and wandering thoughts, Carroll Cloar seems always in Earle, Ark., 1913, which is where and when he was born. He never lost that sense of place, of time held in abeyance. That is what you come away with after being stilled by this exhibition of his works at the Arkansas Arts Center in Little Rock, and walk out into the now unquiet night, made new by his eye.

Others have it, that power to evoke not so much a scene as a spirit. Others like Andrew Wyeth and Edward Hopper, but Carroll Cloar is our own, the Delta's own. His work has a mythic power that those who know the lay of his land, or those for whom he evokes it, will not mistake for just passing emotion.

The local art dealer attributed Carroll Cloar's appeal/success to a nostalgia for this part of the always vanishing South, but it is an appeal not limited by locale or personal experience. It is universal even if it arises from the particular, as the most powerful universals do. Carroll Cloar's appeal reaches far beyond any particular place. Just as you don't have to know Chadds Ford, Pa., to appreciate Wyeth.

Despite his youthful fancies of not belonging -- what artist ever feels he belongs? -- Carroll Cloar knew where he was from, and where he was always returning to. In his forever now, his stilled time, Carroll Cloar's world will engage you, too, and never let you go.

Looking at these images, you know where you are. Yet you see it afresh, the way things look when you've been away for a while: the same yet different. Man the Voyager is always looking back in hopes of seeing home as if for the first time, and realizing, like astronauts in outer space, or Jacob in the Old Testament returning to where he had been, that this place was holy and he knew it not.

Here in these paintings, one after the other, the past is as well defined as the little, topmost limbs of Carroll Cloar's trademark trees, always reaching up, each as clear as the real ones you see just after you've got a new prescription for your eyeglasses.

The best of show? It's not easy to decide. Your pick might change the next time you come back. And you will come back, drawn irresistibly. For the kind of observer given to wandering through cemeteries, those liveliest of places, it may be "Gibson Bayou Anthology," done in 1956. The detached dead stand posed row after row beside their tombstones, gazing outward without emotion at the viewer aswirl in the ephemeral present. Their ranks recede generation after generation into the fading past, and there is a peace like no other about them as they wait for us.

How did Carroll Cloar do it? Let him tell it, for the painter was no mean writer, either, and his prose has the care and economy, the deceptive simplicity, the dramatic appeal of his best, undramatic paintings:

"While I was a boy I used to wander through Gibson Bayou cemetery, picking dewberries. I got acquainted with all the people buried there and had known some of them in life. Gabe Smith, whom I never saw, was a favorite because he had died violently, in a gunfight. The girl on the right, in back, is Odor Hayes, who died young. I caught smallpox from her."

Oh, the names. And, oh, the South, the South ... the South! It is always changing and yet never changes. Always disappearing and yet never gone. In the painting, a little girl in formal dress seems to be the only one of the dead who doesn't cast a shadow. She appears outsized, as she may have been in Carroll Cloar's childhood memory. Her wide eyes stay fixed on yours. Perhaps that is the subject of all Carroll Cloar's work: transience and permanence. What changes and what doesn't. Maybe that is why his work has an eerie yet assuring effect.

Down on the left, there is a small tombstone, as if it had not yet grown to full height. No one stands beside it. Not yet. Not when it was painted. The name on the tombstone also serves as the signature on the painting: Carroll Cloar.

This exhibit at the Arkansas Arts Center, titled "The Crossroads of Memory: Carroll Cloar and the American South," is to run through Sunday, June 1, when the pictures come down. But they'll stay with you. Like the South.