Showbiz and Politics: Always The Twain Seem to Meet 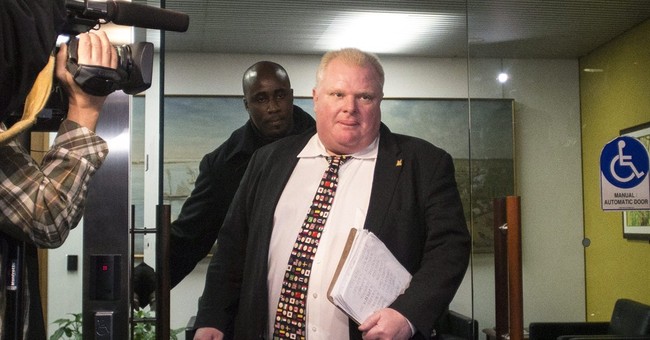 Old-timers may recall the old days when Canadian politics were not just dull but almost blank. As empty as a modern white-on-white canvas depicting some vast snow belt in the featureless depths of Arctic winter.

But that was before Toronto's mayor and buffoon-in-chief changed Canada's image all by his outrageous self. Rob Ford seems a politician made for the times and tabloids -- like Anthony Weiner or Eliot Spitzer, a couple of New Yorkers who might be a better fit for New Orleans, or at least some of its seamier wards. (Would those two be allowed anywhere near the respectable Garden District? Surely they'd be stopped and sent right back to the French Quarter.)

Who knew the day would come when such types could be confused with, of all species, Canadians. The late Mackenzie King, PC, OM, CMG and nigh-eternal stuffed shirt of a prime minister, is definitely dead. And so is once standard Canadian respectability.

It used to be said in the long ago that Canada had some of the most beautiful scenery and dullest people in the world. In these more colorful climes south of the 49th Parallel, characters like Louisiana's Edwin Edwards and Earl K. Long ran around loose. And one governor of Illinois after another took up residence in a federal penitentiary.

Once upon a better time, trying to imagine an oafish, loudmouthed Canadian was like trying to picture Warren Christopher or Allen Dulles doing stand-up comedy. Just to dredge up their names is to forget them. And that's when they were still being dutifully mentioned in the morning papers, which must have been starved for copy.

Who would have thought that someday -- like now -- Canada would be where the hilarious/sordid action is. It seems Toronto's half-disgraceful, half-comic, all-bizarre all-the-time mayor was caught on tape smoking crack cocaine, threatening to kill somebody, and generally making an appalling ass of himself. Now he can't seem to stop embarrassing himself and what used to be his thoroughly respectable metropolis.

In the latest frame of the Rob Ford Show, taken as Toronto's city council was reducing him to a mayor in disgraced name only, the big lug charged right through a petite, 60-year-old councilor, knocking the poor little lady to the floor.

The visibly shaken Pam McConnell ("I just need to sit down," she said after being helped to her feet) sounded aghast. "This is the seat of democracy," she protested, "not a football field." Though after Rob Ford came rumbling through, it wasn't easy to tell the difference.

Maybe one of those fabled Canadian hockey teams could lend Toronto's city council some of its crash helmets, huge gloves and a bunch of padded paraphernalia in general. Plus a hockey stick with a sharp, painful angle. Like the one in that infamous phony Climate Change chart. Just for purposes of self-defense. At least when Rob Ford is around.

Gentleman that he is, Mayor Ford was quick to pick the lady up off the floor after he'd so unceremoniously deposited her there. The way a bad bowler might right one of the smaller bowling pins after a bad carom shot. "I picked her up," the mayor said in his supposed defense. Now we know what passes for chivalry in those frozen climes.

Naturally the mayor had an alibi (don't they always?) and it was delivered in proper police-report English. He was just rushing to the defense of his brother in the back of the room, he explained, and couldn't be stopped by a minor speed bump like poor Ms. McConnell. "I ran around (and ran the lady into the ground) because I thought my brother was getting into an altercation." Ah, yes, an altercation -- the current latinate euphemism for an old-fashioned, honest, straightforward fist fight.

These days a plague of euphemism seems to have overwhelmed politics both north and south of the Canadian border. The lowest, most unacceptable, disgraceful conduct on the part of an elected official may now by described as "inappropriate," an adjective that seems to cover an ever wider and lower multitude of sins in our oh-so-liberated society.

Not since our own former big lug of a president offered his unforgettable apologia-and-alibi ("I did not have sexual relations with that woman....") has a cover story like Rob Ford's been so unconvincing. Not to mention unchivalrous.

It will not surprise contemporary readers to learn that Toronto's mayor and his brother are planning to start their own television show. The Ford show (tentatively titled "Ford Nation") would fit right in with the current rage for reality TV shows, which aren't always easy to distinguish from so-called reality itself.

You can't make these things up. Unless you're Finley Peter Dunne at the turn of another century or covering some of the more colorful elections south of the Mason-Dixon Line. Who would have thought that Southern politics would look almost serious one day compared to those in Toronto, Canada? The world's turned upside down, I tell you.