Time For A New Contract With America 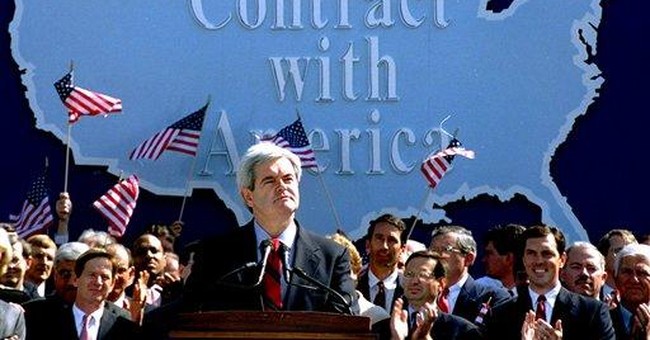 Does anybody remember the Contract with America besides historians?

More of us should. Especially politicians, reformers and the increasing number of Americans dissatisfied with where the country seems to be headed -- in a handbasket.

A lot of Americans were worried about the country's direction in 1994, too, when a bright young president from Arkansas who had been inaugurated with such high hopes was foundering, and the country with him. His administration was beset with a spate of scandals of his own making, each with the customary -gate appended to its name, from Travelgate to Troopergate to Fornigate to other -gates galore.

For a while there, the beleaguered new president couldn't even find a nominee for attorney general who hadn't tried to get out of paying taxes for her household help, a particularly low but widely accepted habit among the well-to-do.

To top it off, the new president's health-care plan, which was really his wife's pet project, was falling apart even before it could be rammed into law. (If only the same fate had befallen Obamacare, its author might be a good deal more popular today. Some defeats are victories in disguise.)

The rookie commander-in-chief of the country's armed forces back then had been reduced to negotiating with his generals over the status of homosexuals in the military, if any.

Bill Clinton would finally settle for not asking and not telling. Instead of just issuing an order the way Harry Truman did when he desegregated the military. The only response HST expected from the brass when he decided a military question was the one he got: Yessir. But with Bill Clinton, the buck seemed to stop everywhere but with him. Naturally enough the public's confidence in his sense of command plummeted.

As for the opposition party, the Republicans were no more popular back then than they are now, and the country wanted something more than just opposition from them. It wanted clear, positive, specific responses to the nation's mounting problems, not just carping criticisms of a failing and then flailing president. And that is just what the country got in the midterm elections of 1994.

Republicans campaigning for Congress that year adopted the same national agenda, point by point. They called their program, drawn up and presented by a young congressman from Georgia named Newt Gingrich, the Contract with America.

That contract wasn't just a collection of the usual political platitudes, but a contract. A solemn commitment. A covenant. And each of its clauses came with a draft statute ready to be introduced, debated and passed into law: Term limits. Tort reform, aka "Loser Pays." Balanced budgets. Lower taxes, specifically on the kind of investments that produce jobs and real economic growth. Tax reform that would include a bigger tax credit for families with small children. Welfare reform that would emphasize work, not handouts -- in short, independence rather than continued dependence. And a requirement that Congress be covered by the same laws it passes for the rest of us. Not like Obamacare today, with its special subsidy for members of Congress and their swollen staffs.

The opening clause of that Contract with America made its purpose clear: "As Republican Members of the House of Representatives and as citizens seeking to join that body, we propose not just to change its policies, but to restore the bonds of trust between the people and their elected representatives. That is why, in this era of official evasion and posturing, we offer instead a detailed agenda for national renewal, a written commitment with no fine print."

Contract offered, contract accepted. Came Election Day in November of that year, the GOP scored its biggest gains in 40 years, winning control of both houses of Congress. That contract would even win over a Democratic president eventually. After only brief resistance, Bill Clinton agreed to a complete revamp of the welfare system (it became workfare) and balanced budgets. No one benefited more from the Contract with America than he did, winning re-election as a reform president.

Now another president faces a crisis of national confidence. And it's time for the GOP to offer another Contract with America, one that should include a complete revamp of the president's fast-collapsing health-care program. If it can't be dropped entirely, the whole Rube Goldberg contraption needs to have every part of it replaced.

For example: Why not let us just plain citizens buy health insurance with pre-tax dollars the way corporations do? Why not expand our health savings accounts instead of eliminating them? Why not let folks buy policies that offer coverage for just catastrophic illnesses instead of being forced to buy all the bells and whistles that drive insurance premiums sky high? Why not let Americans keep our insurance instead of forcing us to drop it? (And our doctors, too.) Why dump millions of us into Medicaid without giving us any choice of insurance companies? Let us buy insurance across state lines to make health-care plans affordable in more than name. And so constructively on, point by point.

Yes, such basic reforms might require that Obamacare be repealed in spirit if not in name. Because what's needed is a 180-degree course correction. It won't be easy to right this sinking ship called Obamacare. But the whole country might breathe a sigh of relief if it could be turned around completely.

No one might benefit more from such an about-face than the president himself, who would finally be able to restore the nation's confidence in his leadership. He would have proven wise enough to recognize his mistakes, humble enough to acknowledge them, and strong enough to correct them.

"The curious task of economics," said an economist of note named Friedrich Hayek, "is to demonstrate to men how little they really know about what they imagine they can design."

The curious accomplishment of Obamacare has been to demonstrate how little our planners and politicians know about health care -- and how easily they can complicate, obfuscate and generally screw it up.

A new, updated Contract with America would begin by reforming Americans' health-care coverage but not end there. It ought to go on to cover much of the same ground the old contract did in 1994, like cutting the deficit and balancing the budget, strengthening national security and encouraging economic growth. The old contract was rolled out only six weeks before the election. Let's not wait that long before unveiling a new, improved one.