The Slick Salesman from Teheran 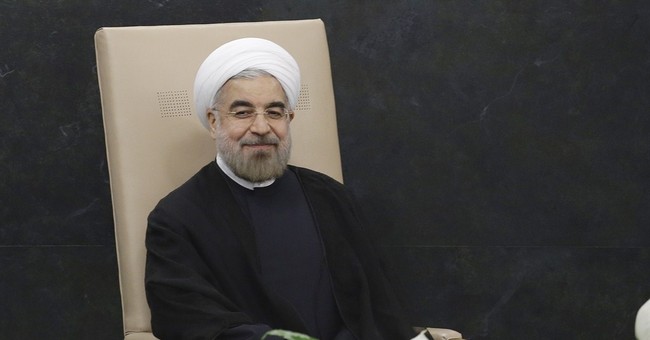 A man "may smile, and smile, and be a villain," to quote a play of some renown called "The Tragedy of Hamlet" (Act I, Scene V). This suave new "moderate" president of Iran smiles and smiles, too. Experienced and worldly diplomat that he is, His Excellency Hassan Rouhani dispenses ever more rhetorical softsoap, the kind guaranteed to ease and smooth, all the while winning time. And time is the one invaluable, irreplaceable commodity in that other great tragedy, the one called Realpolitik. Or sometimes The Great Game of Nations. And his excellency's skill at it is undeniable, for he's played this game before. Expertly.

Visiting the United Nations last month, Hassan Rouhani denied the president of the United States a public handshake but managed to turn him into a supplicant nevertheless. Yes, no doubt about it, the man is smooth. Smooth as a serpent's smile.

Not long after the mullahs in Teheran were starting out on their long, patient trek toward a nuclear weapon of their own, Hassan Rouhani recalled how easy it had been to get one of Iran's first nuclear facilities built at Isfahan without arousing international opposition. All he had to do was lull Western leaders into a sense of complacency while the uranium was being enriched and the centrifuges readied. As he wrote in 2006, "by creating a calm environment, we were able to complete the work on Isfahan." As we say around here, this ain't his first rodeo -- or his first charm offensive. He's had experience. And considerable, ever more ominous, successes.

Now the West, and the world, is being treated to another verse of the same siren's song -- how Iran is interested in nuclear power just for peaceful purposes, and seeks only good relations with Washington, and so sweetly on. Once again his excellency smiles and smiles, playing for time, while Washington -- or at least this administration -- drops its guard.

It was left to John Bolton, who lost his position in the last administration for being all too candid, to outline how this president, too, has retreated -- step by step, almost in tandem with the Long Stall that Iran's rulers have learned to substitute for any real negotiations.

To quote John Bolton's list of Barack Obama's retreats just of late: "Over the past year, Mr. Obama failed in his stated objective to oust Syria's Assad regime from power; failed to impress Assad that his 'red line' against using chemical weapons was serious; failed to exact retribution when that red line was crossed; failed to rally anything but small minorities in either house of Congress to support his position...."

And there's more to come, lots more, bluff after bluff, retreat after retreat, before one morning the papers report that Teheran has exploded its first nuclear device, perhaps one delivered atop a new missile.

This new Iranian president is a lot slicker than the bumptious fanatic he succeeded in office, which makes him all the more dangerous. He has the air of an experienced gambler with an ace up his sleeve. And he's playing his naive opponent the way an old fly fisherman would a great, big gleaming trout, biding his time till he reels that sucker in.

Once again he's "creating a calm environment" until the day a nuclear Iran is as impregnable as North Korea's brutal dictatorship, and just as capable of making trouble for its neighbors. As it already has around the world, from Beirut to Buenos Aires to Bulgaria, or wherever its terrorist network can strike. No wonder he smiles and smiles as the centrifuges spin and spin. Till one day we'll all wake up and wonder why we slept for so long.

People forget what a gradual, lulling process appeasement can be. It's not just one signature agreement like Munich but all the little cave-ins that went before it and the further surrenders that came after. We remember old Chamberlain in his frock coat and high collar proclaiming "Peace in Our Time" to cheers and applause, praise and bouquets, from a gullible nation delighted to hear that war had been avoided, unaware that it had been made certain. As weakness on the part of democracies always invites aggression.

Some understood what had happened. Even the French premier Edouard Daladier, made an accomplice to the sell-out at Munich, knew better than to proclaim victory. Greeted by much the same acclaim when he returned home, he could only turn to an aide, nod at the adoring crowd that greeted him at the airport, and whisper, "The fools!"

A few lonely observers did know better than to celebrate when mourning would have been more appropriate. To quote the opening sentence of a letter to the editor of the Manchester Guardian after the Munich Agreement had been announced to great fanfare, "The flowers piled before 10 Downing Street are very fitting for the funeral of British honour...."

One stubborn back-bencher in Commons named Winston Churchill did stand up to explain what had really just happened: "We have suffered a total and unmitigated defeat ... you will find that in a period of time which may be measured by years, but may be measured by months, Czechoslovakia will be engulfed in the Nazi regime. We are in the presence of a disaster of the first magnitude ... we have sustained a defeat without a war, the consequences of which will travel far with us along our road. ... And do not suppose that this is the end. This is only the beginning of the reckoning. This is only the first sip, the first foretaste of a bitter cup which will be proffered to us year by year unless by a supreme recovery of moral health and martial vigor, we arise again and take our stand for freedom as in the olden time."

There was a time when a bust of Churchill still adorned the Oval Office. There was a time when an American president sought peace through strength -- and, against all the conventional unwisdom of his time, achieved it. Ronald Reagan is only a bright, shining memory now, three decades and a world ago. Today the country has a president who, for all his red lines and transient bluster, pursues peace through weakness. And the end result of his policy, if it can be described as anything as coherent as a policy, is likely to be as successful as appeasement usually is, that is, not at all.

It's not as if it can be said in defense of this administration that it knows not what it does. To quote its secretary of state just last month, even before the last whiff of sarin had dissipated outside Damascus, "this is our Munich moment," a moment when the West dare not remain "silent spectators to slaughter." And the result of all John Kerry's posturing is that we have become voluble spectators of the continuing slaughter in Syria and, perhaps soon enough, far beyond. No wonder Hassan Rouhani smiles and smiles.