The President Forgets Something 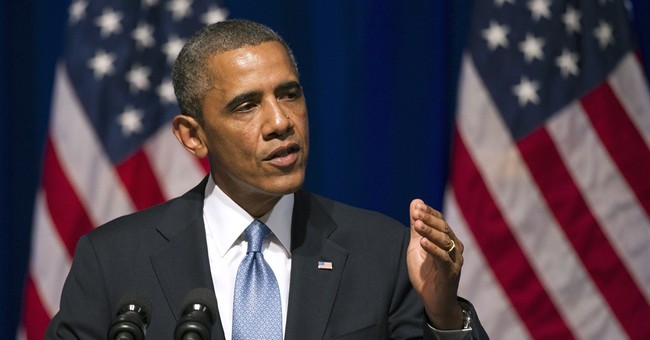 Our president just can't resist commenting on what all too many people seem unable to stop themselves from commenting on: the verdict in the Trayvon Martin/George Zimmerman trial in Florida. You may have noticed the story in the news. The story in the news? There were so many of them -- an endless stream, a flood, nothing but. How could anyone have missed the deluge?

The president certainly didn't, and felt called on to talk about it, sometimes with excellent judgment. As when he said the jury had delivered its verdict and he wasn't going to second-guess it, the law is the law, and all that. Which is a good policy for the president of the United States. As chief executive, his decision not to comment on the outcome of this jury trial showed a decent respect for a co-equal branch of the federal government, the judiciary. And for the constitutional division of powers in this Republic.

Then again, the president has been second-guessing this case even before the verdict was in, if that's possible. He's certainly been commenting on it, and when a president of the United States comments on an ongoing case in the news, and even identifies himself personally with one side of it, it is idle to pretend that he has not taken sides, or that his opinion won't influence anybody. For or against.

First the president said that Trayvon Martin could have been his own son if he had had one. Now, with the verdict in, he says, "Trayvon Martin could have been me 35 years ago." Whatever such observations, ruminations and speculations may be, they could scarcely be described as impartial or, as good judges are supposed to be, disinterested. On the contrary, he has emphasized his own race in talking about a case that, inevitably, had to have racial overtones.

Naturally, he had to bring all those state Stand Your Ground laws into the conversation, too. A lot of us aren't crazy about them, either, and maybe they should or should not be changed, but one thing's for sure: They had nothing to do with the Zimmerman case. Both the president and his remarkable attorney general -- remarkably inept, that is -- can display a genius for irrelevance when it comes to legal matters. And neither seems to recognize that, like the rest of us, they may have their own prejudices. The beam in our own eye tends to escape our attention, no matter how obvious to others.

"It's important," said the president, "to recognize that the African-American community is looking at this issue through a set of experiences and a history that doesn't go away."

But surely he doesn't believe that only African Americans are familiar with that history. Indeed, isn't that why we all study history? Or at least should. In order to enter not just other people's skins and experiences but their times. Not just to understand them as best we can, but identify with them. We could all have been Trayvon Martin, we could all have been George Zimmerman. Homo sum, humani nihil a me alienum puto. Nothing human is alien to me, said Terence, if you will forgive my poor translation.

But when we divide humanity into stereotypes, choosing one or the other to identify with, black or white, this or that, Them or Us, without seeking to understand the past that shaped the other, too, we are left -- how did the poet put it? -- as on a darkling plain/Swept with confused alarms of struggle and flight/Where ignorant armies clash by night. And there we founder, deprived of the light that the past gives us to seek understanding, and so shape a better and common future.

We all bring our own historical experience with us to the study of history and literature and the humanities in general. But that doesn't mean the experiences of others are beyond our understanding or capacity to identify with. You don't have to be Jewish (to enjoy Levy's Rye Bread, as the ad used to say) or to identify with the Children of Israel in Egyptian bondage. Benjamin Franklin proposed that the Great Seal of the United States depict the Israelites crossing the sea on dry land while its waves overwhelmed Pharaoh. (The culture was more biblically literate in those revolutionary times.)

We do not learn just from our own heritage. Why, I hear tell that some Yankees have been known to savor Faulkner and come to understand his more obscure Southern references and poetic nuances, a feat that yet eludes me.

Classical education may have faded from the curriculum -- an incalculable loss to Western civilization -- but when it was recognized as essential, surely not only Greeks and Romans felt its power and capacity, or profited from the study of Greek and Latin.

On those occasions when Barack Obama speaks about race, and no American president can or should avoid a topic that lies at the core of not just the black but the American experience, his is the eloquent voice of our first black president. If only he also remembered to speak as our president. Period. Without qualifier or adjective. The president of all the people, not just of some of us.

Once upon a time, as a promising young senator from Illinois, Barack Obama galvanized not just a national political convention but a divided and confused nation (sound familiar?) when he rose to say that, while the pundits liked to split the country into red states and blue states, "We are one people, all of us, pledging allegiance to the stars and stripes, all of us defending the United States of America."

On that occasion, he rose above the country's divisions and confusions instead of adding to them. He united and not further divided us. There are times, too many of them of late, when some of us miss that Barack Obama, for it is important to recognize that he is president of all of us. Even and especially at those times when he himself may not keep it uppermost in his mind.