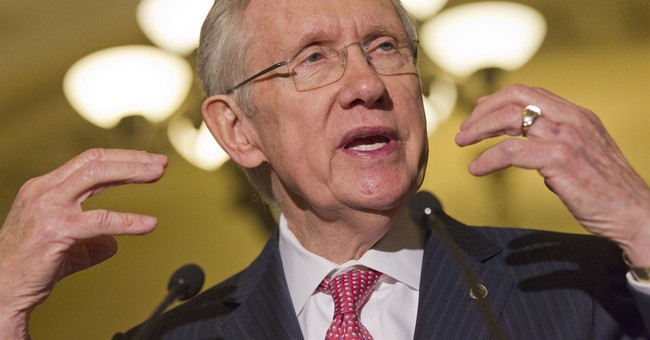 The majority leader of the U.S. Senate was being himself again, unfortunately. That is, a bully. If the Republican minority in the Senate wouldn't go along with a slate of nominees to high federal office that the president wanted confirmed, well, Czar Harry would just do away with the whole institution of the filibuster in this instance. And maybe any others in the future.

How? By replacing the Senate's now customary 60-vote majority required to limit debate with a simple majority. Hesto Presto, a distinctive feature of the U.S. Senate, which was designed to be a deliberative body, would disappear. It's called the Nuclear Option, and for good reason. It threatens the whole institution of the filibuster, which has protected the rights of the Senate's minority, for good or ill, over decades.

Many a scholarly defense of the filibuster has been delivered over the years, not the least of them by an eloquent young senator from Illinois back in 2005, when it was his party that was the one in the minority. It might be worth reviewing his remarks on that occasion in the midst of this current contretemps over free speech in the U.S. Senate:

"While I have not been here too long," he began, "I have noticed that partisan debate is sharp, and dissent is not always well received. Honest differences of opinion and principled compromise often seem to be the victim of a determination to score points against one's opponents. But the American people sent us here to be their voice. They understand that those voices can at times become loud and argumentative, but they also hope we can disagree without being disagreeable. At the end of the day, they expect both parties to work together to get the people's business done. What they do not expect is for one party, be it Republican or Democrat, to change the rules in the middle of the game so they can make all the decisions while the other party is told to sit down and keep quiet.

"The American people want less partisanship in this town, but everyone in this chamber knows that if the majority chooses to end the filibuster, if they choose to change the rules and put an end to democratic debate, then the fighting, the bitterness, and the gridlock will only get worse."

That was the view of a promising new member of the U.S. Senate back then named Barack Obama. Now that he's president, he no longer sounds as convincing on this topic. Or perhaps on any other.

A long-time aide to various Democratic senators, Richard Arenberg, covered just about all the bases when he summed up the indispensable place of the filibuster in the Senate and in the whole American legislative process:

"The right in the Senate to debate and amend serves as a protection to the minority, fosters deliberation and compromise, discourages unchecked majority control, moderates extreme outcomes, avoids precipitous decision making, discourages domination by the more populous states, ensures the role of the legislative branch in oversight of the executive and assures the role of the Senate as a counterbalance to the majoritarian House of Representatives in our system of checks and balances."

It would have been a pity, and danger, to lose the filibuster because a blusterer insisted on having his way.

Give 'em a happy ending every time. This cliffhanger ended when, after intense negotiations, the president agreed to withdraw a couple of his more contentious nominations and the Republicans consented to approve some of his less objectionable ones.

The president had snubbed such a compromise when it was first proposed by the leader of the Republican minority, Kentucky's Mitch McConnell, but both sides saw reason this week. And the filibuster has been saved, like an old blunderbuss put away For Emergency Use only. Which is a good thing; this country needs to save as many of its hallowed institutions as it can. They can come in handy.

Once again crisis has been averted by compromise. Webster, Clay and Calhoun would surely have approved. Well, maybe not John C. Calhoun, but Henry Clay and Daniel Webster worked out a great compromise that held the Union together for another unlikely decade (1850-60) before Calamity descended. Now the Senate has muddled through again, which certainly beats breaking down. And another of Harry Reid's bluffs has been called.

Moral of the story: It pays to stand up to bullies.