When a Coup isn't a Coup 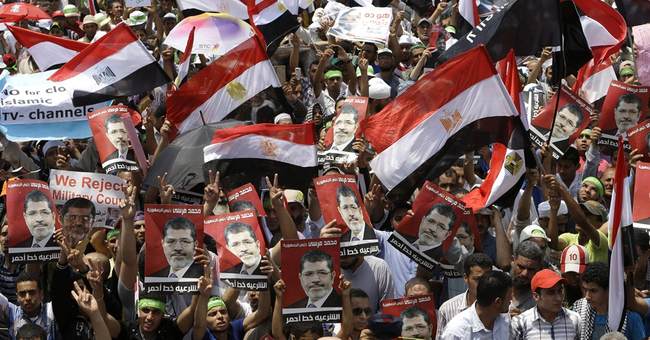 It seems the law, which has a way of upsetting the best laid plans of mice and American administrations, bars foreign aid to any countries "whose duly elected leader of government is deposed by decree or military coup," which would seem a fair enough summary of what has just happened in Egypt.

But cutting off the $1.5 billion a year that Congress authorizes for that country would only add folly to the turmoil that now threatens a key American ally, or at least a sometime ally but always a central nation in the Middle East. Cut off American aid to it at this crucial juncture? It's hard to think of a better way to undermine the one institution, the Egyptian military, that now stands between that nation and further chaos.

Therefore a coup isn't a coup. Not in the curious tongue that White House press secretaries must master if they're going to deny the obvious without cracking a smile. Richard Nixon had his Ron Ziegler, and now Barack Obama has his Jay Carney. Which is why poor Mr. Carney had to deny that the military coup in Egypt was a military coup in Egypt.

O-o-o-kay. At least poor Jay Carney (Poor is rapidly becoming his first name) did offer a hint about why so obvious a falsehood had to be trotted out. Suspending aid to Egypt, he said, "would not be in our best interest." At last, a glimmer of truth peeks through the clouds of doublespeak. Give the man at least that much credit.

Rather than play these games with the national interest, not to mention truth, it would be better to change the law to give a president the kind of leeway he needs when a blanket prohibition like this one prevents him from making a candid exception to it. And doing what is best for the country.

Moral of the story: A good rule in general doesn't always have good results when it's applied in particular circumstances -- like Egypt's just now.

But changing the law in order to give the chief executive the flexibility he needs in enforcing it might be impractical at such short notice. And for good or ill, Congress has always been jealous of its powers. So word games must be played, and the law skirted rather than amended. Even though simply changing the law would be the more responsible, and candid, course. But till it's changed, subterfuges like Poor Jay Carney's will be invited.

Let's just say there are times when the truth has to be, uh, softened. Consider the quick response offered by the head of this country's National Security Agency when he was asked by a senator whether his agency was collecting data about millions of Americans' phone calls. "No, sir ... not wittingly," said James Clapper, though his agency was doing just that -- as he had to acknowledge soon afterward. His explanation and apologia: Under the pressure of the moment, rather than risk revealing a then secret program, he resorted to answering the question in the "least untruthful manner" he could. More word games.

Oh, what a tangled web we weave/ When first we practice to deceive! Practicing to deceive could sum up a great portion of any intelligence service's function. Or even any diplomat's. A long-ago cynic/realist once defined a diplomat as "an honest gentleman sent to lie abroad for the good of his country."

The same job description might apply at home to White House press secretaries. The best of them -- one thinks of the late Tony Snow -- managed to be candid and still serve their president's and their country's interests. The worst of them, the Zieglers and Carneys, get stuck with presidents who are hard to defend. Or with national policies that are as necessary as they are legally dubious.