The Plight of the Blue Dogs 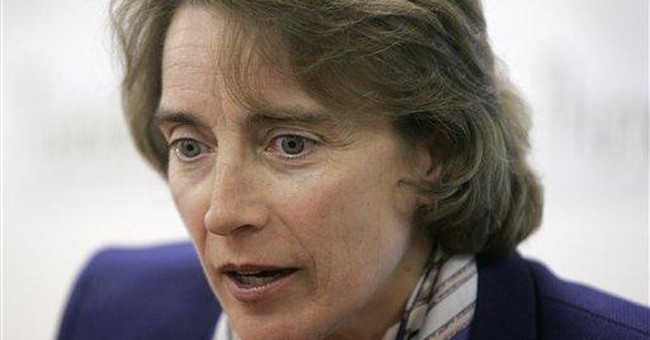 Pity the blue dogs -- those Democrats in Congress labeled moderates or even conservatives because they depart from the party line on occasion. As on Obamacare or the next big spending program (always call it Economic Stimulus!) or the Bailout of the Day. A show of independence from time to time can be smart politics: The blue dogs' deference to public opinion back home -- even while they support the administration on key votes -- was supposed to assure their re-election.

But the natives grow restless, perhaps because they've caught on to the double game that some of these ever shifting Democrats have played. Case in point: Blanche Lincoln, senior senator and shape-shifter from Arkansas. One day she's conservative, the next liberal, and where she'll land you never know. Having no fixed principles leaves her plenty of room to maneuver, but by now she's all maneuver, no substance. The exquisite pointlessness of her politics is impressive even in a professional politician.

For example, Sen. Lincoln has voted both for and against Obamacare. That way, she can remind those wary of its higher taxes and less competition that she did after all oppose the Public Option -- even as one emerges from all the new restrictions on private health coverage.

At the same time, she can assure those who wanted a more socialized system of medicine that she wound up voting for that, too, after all was said and done and negotiated. For she was one of those senators who can claim to have cast the decisive 60th vote that let Obamacare get to the floor of the Senate.

Having taken both sides of this issue, Sen. Lincoln can now take either, depending on the audience she is addressing at the moment. All she has to do is keep flapping, like one of those giant, inflatable figures you see promoting some used car lot or discount store, always changing with the wind. They catch the eye, but only for a moment. Then interest in their contortions wanes, and we drive on.

This (not so artful) dodger from Arkansas has taken both sides, if not more, on the Bush tax cuts, too. Should they be extended? In whole or in part? And if not now, when?

For a time, the senator was sticking with the party line and class war: Keep the tax cuts for the Struggling Middle Class, take them away from the Awful Rich, who'll only invest them.

But that line grows untenable as this recession lingers and the recovery maintains its snail's pace. Besides, the economically literate, those insufferable know-it-alls, keep pointing out that it's those awful investors who meet payrolls and create jobs, needed jobs, for the rest of us.

Imagine that. The rich turn out to have their uses after all. Even those folks who just want to be rich, and so invest their capital and labor in their dream, can come in handy. Maybe they shouldn't be penalized for their ambition after all.

As election day approaches, more and more Democratic candidates begin to see the light, especially when voters keep asking where the jobs are. Remember when unemployment would never reach 8 percent? That mark was left behind some time ago. Result: More and more blue dogs decide they're for extending the Bush tax cuts after all. All of the cuts. For everybody.

And so, no surprise, Sen. Weathervane is, as always, reconsidering. She's still in favor of extending those Bush Era tax cuts to only some taxpayers, she said other day. But, and there's always a but with her, "I think there is a reasonable way to look at how we extend those cuts for the category in between $250,000 (a year) and millionaire status. Those are important places, too. You can see resources getting back into the economy."

Forget Economics 101. There's nothing like a re-election campaign in uncertain times to teach a U.S. senator some basic economics. Like the advantages of "getting resources back in the economy." By which I think she means encouraging people to invest by not expropriating most of the income from their investments. The senator's eyes may not have completely opened, but at least they're fluttering. Midterm elections can have that effect on blue dogs.

By now Blanche Lincoln's opponent in this election sounds as bored as the rest of us in Arkansas with the senator's constantly changing positions. He's a stolid -- you might even say dull -- Republican congressman by the name of John Boozman, and he's much too pedestrian a thinker to maintain an interest in the senator's political contortions. Even if it's quite a show. (Continuing Performances!)

Congressman Boozman says he's heard the senator "say everything there is to say" about whether to extend the Bush tax cuts. "She said she's opposed to it, then she talked upper brackets. It's like a lot of things. Nobody really knows what she's thinking or how she'd vote. Now she's waffling on this."

But it's no great mystery, really, what Blanche Lincoln will say next. She'll just shift with the wind. Or as she put it, more delicately: "I don't think we should have to say we're either going to extend the Bush tax cuts or take on the Obama tax cuts. I think as a Congress it's our responsibility to look at economic circumstances as they exist and what the opportunities are."

The lady doesn't seem to realize, or at least be able to admit, that hers is the perfect formula for perpetuating uncertainty about the economy. For how are investors and employers, people thinking about expanding their business or starting a new one, supposed to plan ahead in an environment in which tax rates are up in the air till the end of the year or a lame-duck session of Congress, whichever comes first?

Economies thrive under stable conditions, when tax rates are known and government policy -- good, bad or in between -- is not a guessing game. But these days capital is being hoarded; who dares risk it when no one knows what the rules and regs and rates will be next year? But the gentlewoman from Arkansas calls this ... responsibility. And promises to continue it. Maybe.

Wherever she finally lands on an issue, she'll change her mind soon enough. Her political direction is so aimless, without any constancy of purpose or direction or even ideology, that the one thing that stirs interest in it is its remarkable emptiness. She seems to be without any guiding principle -- except of course her own re-election.

Blanche Lincoln may be a U.S. senator now, but she still thinks like the administrative assistant she once was -- so completely absorbed in the process that she's lost sight of its purpose.

Whatever position she'll take next, voters lose interest in it. And in her. That's the problem with blue dogs, and it's the essence of their problem this election year: One change of position may win friends and influence voters; constant change just bores.