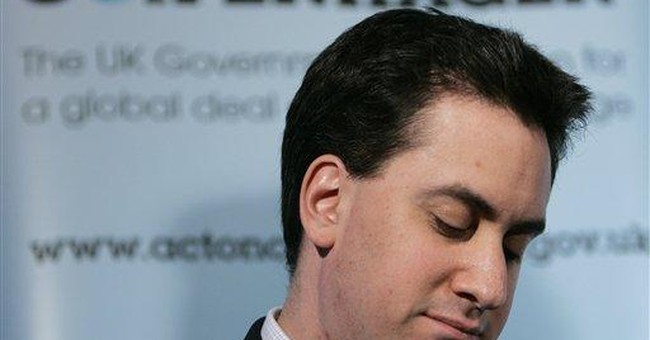 The other day a friend asked us if I'd written about the Copenhagen conference on climate change, carbon control, environmental technology, the ecological future of Spaceship Earth, cabbages and kings, and the 101 other Very Important Things covered by that huge, long-awaited and now suddenly fizzled international gabfest.

No, I hadn't written about it. Maybe because it ended not with a bang but with a whimper heard 'round the world: a flurry of non-binding agreements, aka vague misunderstandings. It was the biggest anticlimax since Geraldo the Great Rivera opened Al Capone's vault to find little more than dust. Any actual policies to come out of Copenhagen promise to be as empty.

To sum up the essential deal made at Copenhagen: The developed world sort of promises to give the undeveloped one $30 billion over the next three years -- plus $100 billion a year after 2020 -- in exchange for its separate but equally nebulous promise not to develop too quickly. As with Obamacare, the theoretical benefits are to come first, then the real pain by some always-delayable deadline. It's more convenient that way. Just charge it to some future generation.

Besides the cocksure confidence the delegates displayed in man's ability to reset the world's thermostat, this kind of deal-making in which no one takes the deal made very seriously was the one consistent thread in the tangled web woven at Copenhagen.

There is consolation to be taken in the grand fizzle at Copenhagen. For there is something worse than the conference's failure. And that would have been its success at slowing the world's economic recovery and so dooming still more in the Third World to the bitter fruits of abject poverty: more malnutrition, more disease, and more chaos and instability in general.

Doing nothing has certain advantages over doing the wrong thing, especially on a grand and confusing scale. Besides, the failure of this lavish conference means the delegates can now anticipate many more equally elaborate confabs around the world on the public's tab, complete with equally hyped media coverage and just as inconsequential results. Nice work -- or play -- if you can get it.

Maybe I hadn't written anything of substance about the grand conference at Copenhagen because it proved so insubstantial. My long established policy is, when I have nothing to say about a subject, I try not to say it. Maybe because I've read too many editorials over the years that, having nothing to say, make the grave mistake of saying it. At length. It doesn't exactly make for fascinating reading.

There were doubtless plenty of agreements made at Copenhagen but the major ones were non-binding. Those are the kind of deals that delegates embrace enthusiastically in their speeches but take care not to sign lest their countries be held to their word. They're the kind of oral agreements that the irrepressible Sam Goldwyn, Hollywood mogul and Mr. Malaprop himself, once described as not worth the paper they're written on. Or rather not written on.

Almost coincident with the grand conference at Copenhagen a treasure trove of leaked documents appeared out of the very center of global alarmism over climate change, the Climatic Research Unit of East Anglia University at Norwich, England, which is "widely recognized as one of the world's leading institutions concerned with the study of natural and anthropogenic climate change," according to its Web site. These days it's widely recognized as a center for the suppression of any and all dissenting views about the causes of global warming. If this is science, what would dogma be?

Conspiracies to suppress scientific dissent scarcely ended with Galileo's trial, but at least the church eventually repented and begged pardon. There is little if any sign that the wannabe Al Gores at East Anglia, more politicians than scientists, have been chastened by what's come to be known as Climategate. Instead, they have adopted a variation of the Dan Rather defense: falsified maybe but accurate.

Barack Obama's appearance at the last minute was the final, flashy touch at Copenhagen as he made much ado about much of nothing. The president hasn't demonstrated his diplomatic finesse so convincingly since he went to the same city not long ago to not get the Olympics for Chicago. Which may have been a blessing in disguise, too. (The traffic in the Loop is already bad enough.)

Naturally the president and his handlers came back from Copenhagen declaring a great victory -- Carbon Control in our Time! But surely even they didn't believe it. Certainly the Europeans didn't. As soon as the Grand Conference concluded, the market for carbon-control permits on the European continent dropped dramatically, as if investors were confirming that the countries represented at Copenhagen weren't serious about controlling carbon emissions. No poll is more reliable than the market, where people put their money where their opinions are. It's a great test of sincerity.

The final accord at Copenhagen didn't specify, not in writing, how much big countries like the United States and mainland China are now supposed to reduce their carbon emissions. Nor did the conference decide precisely how much all the other countries were going to sacrifice in order to clean up the world's climate. Just about the only thing the delegates could agree on was to jet off to the next world climate-change conference, which is already scheduled for Mexico City, the one sure effect of which will be to add still more carbon to the Earth's atmosphere.