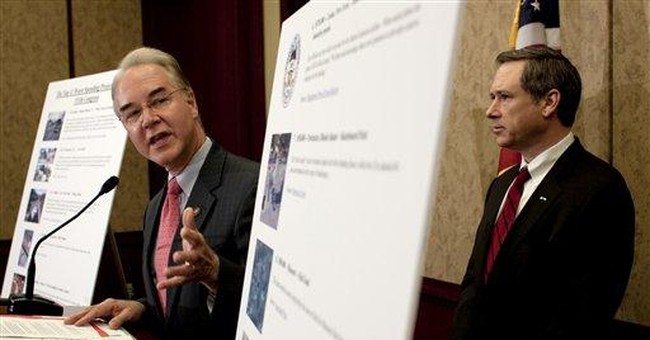 "I daresay you haven't had much practice," said the Queen. "When I was your age, I always did it for half-an-hour a day. Why, sometimes I've believed as many as six impossible things before breakfast." --Lewis Carroll

"Through the Looking Glass"

Slowly but with increasing momentum, the great juggernaut of government continues to cross the line between life and death, good and evil, till all is moral murk.

Thou Shalt Not becomes Thou May or May Not under Certain Conditions, Reservations, Guidelines and Stipulations listed in Executive Order 1234, Sections A, B, C and so endlessly on. ... Data multiply, wisdom diminishes, money flows to no clear end, and humility vanishes. Especially the kind that once inspired awe in the presence of the miracle that is life.

Now one more line has been crossed with great fanfare and called Progress. Just as promised, this administration has announced it will be sponsoring more experimentation with the earliest, most vulnerable form of human life. "Safe as a child in his mother's womb" becomes an ironic phrase.

The bright line that once protected the human embryo from such experiments has grown increasingly dim over the years -- till it grows faint.

For a time government hesitated, as if it knew it was about to tread on sacred ground. But something there is in Homo sapiens that cannot resist violating old rules. All we need be told is: Thou shalt not. And we do it.

It's a story as old as Eden, as new as our president, and as gothic as Mary Shelley's "Frankenstein" -- but without the character development.

It's the oldest temptation known to man: We shall be as gods! We shall create life -- and then destroy it to satisfy our scientific curiosity. This is called Progress.

Moral recklessness, if presented as high-minded idealism, can be quite attractive. It may even become a political cause. What was once cause for trepidation becomes cause for celebration. Complete with photo-ops, presidential press conferences, and souvenir pens. Once we looked down the slippery slope we were on with fear and trembling; now we look back with pride at how far we have come. Down.

Here is how the Washington Post, in language as murky as the ethical grounds on which the administration based its decision, began its story on this latest Scientific Breakthrough:

"WASHINGTON -- The Obama administration on Wednesday approved the first human embryonic stem cells for experiments by federally funded scientists under a new policy designed to dramatically expand government support for one of the most promising but also most contentious fields of biomedical research...."

Contentious? Let's hope so. Let's hope it will always be contentious to create or destroy human life -- in this case, both -- for research purposes only.

Promising? Absolutely. Such experimentation has yielded a multitude of promises. Indeed, nothing but promises. Not a single cure.

The proven benefits of using adult stem cells, a practice that raises no moral objections, are now recorded in the scores. And using stem cells derived from placental tissue -- no ethical issue there, either -- has achieved similar, impressive results. But in the news coverage of the stem-cell debate, the distinction between embryonic and other kinds of stem cell becomes blurred, much like the ethical issues involved.

What this kind of research most definitely has produced is research grants. If that revenue stream is to be maintained, justifications for such experimentation must be broadcast till they become part of the fashionable, unquestionable culture. Something every enlightened citizen believes automatically, without reflection.

Name a debilitating disease, and embryonic stem cells are sure to cure it, or so we are told. Remember all those commercials for embryonic stem cells in the 2004 presidential campaign? If only enough Democratic senators were elected, a star like Michael J. Fox would be cured of Parkinson's. ("What you do in Missouri matters to millions of Americans like me.") In the race for the U.S. Senate in Maryland, voters were told that "George Bush and (GOP candidate) Michael Steele would put limits on the most promising stem-cell research...."

Given the magical power of embryonic stem cells, Christopher Reeve was going to rise up out of his wheelchair and be Superman again. Wonder-working televangelists who make the paralyzed walk have nothing on Democratic campaign committees.

How strange: For years now, state and private funding has been available for experimentation on embryonic stem cells. Yet it still has to produce a single demonstrated cure. Maybe only federal dollars are magic.

With all the attention focused on the unfulfilled promise of embryonic stem cells, there's scarcely any mention of what really has changed: Scientists now have found a way to convert ordinary skin cells into the kind needed for experimentation.

Result: There is no longer any need to cross ethical boundaries. But there is still a political need to paint the opposition as mean-spirited ogres opposed to science, progress, medicine and probably apple pie, too. For there are grants to be handed out, an industry to be built, propaganda to be made. And, always, more ethical lines to be crossed.