How to Earn a Nobel Prize 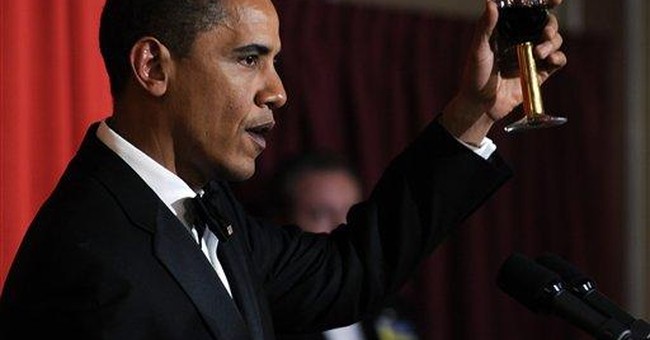 Some are awarded their Nobel Prize for past achievement. One thinks of Theodore Roosevelt's mediating the peace that concluded the Russo-Japanese War of 1905 and led to the establishment of an international tribunal at The Hague to resolve disputes between nations. Bully for him! Barack Obama, it turns out, isn't the first sitting president of the United States to be awarded the Prize.

Others earned their Nobels, whether for peace or literary accomplishment, in tribute to their courageous -- and visionary -- stands against tyranny and injustice in their own country. Names like Alexander Solzhenitsyn and Boris Pasternak come to mind. Both paid a heavy price for their courage, but the Soviet Union would pay a heavier one. That vast criminal enterprise is no longer with us, while "One Day in the Life of Ivan Denisovich" and Doctor Zhivago will surely be read long after Soviet Communism is but a dismal memory.

Still others are awarded their Nobel for no discernible reason except the arbitrary whims and political biases of those doing the awarding. One thinks of master terrorist Yasser Arafat and master bungler Mikhail (Butterfingers) Gorbachev. The latter was going to reform the Soviet Union with a little openness and reorganization. (Remember good ol' Glasnost and Perestroika, the Laurel and Hardy of Soviet history?) Gorby may have meant to replace just a creaky plank or two in the Workers' Paradise, but he wound up bringing down the whole fraudulent structure -- on his own head.

Comrade Chairman Gorbachev just didn't get it, and may not even now. He thought all it would take was a few correctives, maybe just some cosmetic surgery, to save that decaying leviathan. It helped like leeches do a dead man.

Poor Gorbachev, more sinning than sinned against, didn't realize that everything about the monstrous system he'd come to head was rotten from the inside out, first to last, from Lenin-and-Trotsky to Stalin-and-Beria to his own tragicomedy of errors. He might actually have deserved his Nobel Prize if he'd planned to free the world of Soviet Communism; instead he seems to have destroyed it by accident. Oops.

Naturally the now historic figures who did play a pivotal role in ending the evil empire -- Ronald Reagan, Margaret Thatcher, Pope John Paul II -- weren't awarded Nobel Prizes, given the ideological predilections of those who hand them out. They were the sort of leaders, like Churchill, who make history, not just the annual list of Nobel Prize winners.

Not even Barack Obama could have thought he deserved the Peace Prize on the basis of his record, and was candid enough to say so. Yet he earned his Nobel in the very act of collecting it. For his acceptance speech revived the medieval Just War doctrine of St. Thomas Aquinas in clear, contemporary terms. For that feat alone he deserved the award. Who would have thought that, of all current celebrities, Barack Obama would be the one to revive the traditional teaching of the medieval scholastics? All those years he spent teaching law were not wasted. Some philosophy seems to have rubbed off.

This time our ever-apologetic president did not beat his breast over America's sins. Instead he pointed out that, for the better part of a century, peace and justice in the world have rested largely on this country's willingness to fight for its ideals. He wasn't in Cairo any more. As he told those gathered at Oslo:

"I face the world as it is, and cannot stand idle in the face of threats to the American people. For make no mistake: Evil does exist in the world. A nonviolent movement could not have halted Hitler's armies. Negotiations cannot convince al-Qaida's leaders to lay down their arms. To say that force may sometimes be necessary is not a call to cynicism -- it is a recognition of history; the imperfections of man and the limits of reason....

"I begin with this point because in many countries there is a deep ambivalence about military action today, no matter what the cause. And, at times, this is joined by a reflexive suspicion of America, the world's sole military superpower. But the world must remember that it was not simply international institutions -- not just treaties and declarations -- that brought stability to a post-World War II world. Whatever mistakes we have made, the plain fact is this: The United States of America has helped underwrite global security for more than six decades with the blood of our citizens and the strength of our arms. The service and sacrifice of our men and women in uniform has promoted peace and prosperity from Germany to Korea, and enabled democracy to take hold in places like the Balkans."

Those are words that many of us had not heard before in this president's numerous speeches. They reflect a spirit we worried was missing. But in Oslo he revived Aquinas, and sounded like a Daniel come to judgment. Or maybe a Reinhold Niebuhr come back from the 1930s to rebuke a pointless pacifism for acting as evil's enabler. Barack Obama had stepped forward to speak truth to those who have never understood the need for power in a treacherous world.

Yes, this passage of the president's address may have been surrounded by the usual political boilerplate, and a careful reading of the rest of the speech reveals an unfortunate tendency to pack more ideological tics into an address than any one speech can bear. But our president is a politician, after all, and may not be able to help it.

Mr. Obama's central thesis used to be called Peace Through Strength -- even if he didn't dare utter that now politically incorrect phrase on so auspicious an occasion. But his point was clear enough: There is still such a thing as a just war, and the United States is waging it once again.

The same point might have been made by George W. Bush, but why mention that ironic detail? It's what this president said that struck home. Or let's hope it will. And when dark days hover, as they surely will for any nation dedicated to freedom in a world that can be both dangerous and craven, let us hope this president will go back and read his words at Oslo. And be strengthened. As many of us certainly were on hearing them.