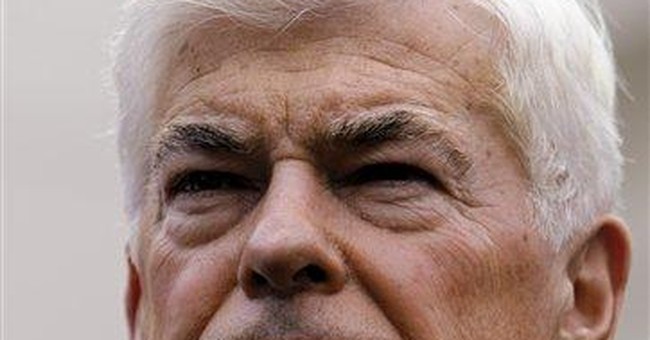 Gosh, what a surprise: A committee of their fellow senators has decided that Chris Dodd and Kent Conrad did nothing unethical when they took out loans from Countrywide Financial on the kind of favorable terms not available to us mere mortals without their financial or political standing -- or a personal connection to the head of Countrywide.

The very Select Committee on Ethics did recognize that the whole deal looked bad, and gave its colleagues a gentle pat on the wrist for creating "the appearance that you were receiving preferential treatment based on your status as a senator." But in the end one hand washed the other, if not very well.

The senators on the committee have a point: This VIP program -- called Friends of Angelo after Angelo Mozilo, the head of Countrywide at the time -- wasn't restricted to U.S. senators; it seems to have been open to a wide, bipartisan range of politicians with pull as well as anybody Angelo Mozilo took a liking to. To name a select few:

How else could these preferential loans appear but improper? Could it be because they were improper, ethically if not legally?

The surest way to lose the very basic and maybe first definition of ethics -- obligations beyond the law -- is to treat ethics as only a branch of the law rather than a separate realm above it. Which is why the phrase, "ethics law" is something of an oxymoron. Just because something is legal doesn't make it right.

When a member of the U.S. Senate is told he's getting a favor, like a point off his interest rate, that ought to be enough to raise a warning flag -- and keep him from accepting the deal.

Countrywide cast a wide net for its favoritism, but just how wide may never be known. It seems the chairman of the House Oversight and Government Reform Committee (which may prove another oxymoron because it doesn't seem all that interested in either oversight or reform) is refusing to issue a subpoena for Countrywide's records of just who got these VIP loans and why.

The chairman of the committee, it turns out, is one Edolphus Towns, a Democratic congressman from New York, who himself received a couple of loans from Countrywide. What a coincidence.

Chairman Towns denies getting any special treatment, but without a look at Countrywide's records, how can the public be assured of that? If the congressman has nothing to hide, why isn't he going after the records that would vindicate him? Somehow we don't expect him to answer such questions till, like Sens. Dodd and Conrad, public pressure forces him to.

Lest we forget, Sen. Conrad tried to brazen out this scandal at first, declaring: "I never met Angelo Mozilo. I have no way of knowing how they categorized my loan. I never asked for, expected or was aware of any special treatment. ... From what we have been able to determine, it appears that we were given a competitive rate."

Well, sure. What's the point of doing influential people a favor if they don't know about it? Let it be noted that Countrywide didn't just give Sen. Dodd a VIP loan; it also contributed some $20,000 to his political campaigns.

Sen. Dodd now has acknowledged that he should have leveled with the public sooner about his relationship with Countrywide -- "I think (my silence) contributed to people's cynicism and distrust that maybe I wasn't telling the truth...." Ya think?

What is most obviously missing from both these senators' approach to ethics, or rather their avoidance of it, is their neglect of what may be the most basic, and is surely one of the first, ethical injunctions ever recorded: Build a fence around the law, said an ancient sage. That is, don't even come close to stepping over the line. Or appearing to.

Something else seems to have escaped these two U. S. senators -- namely, that they are U.S. senators. Which means their getting a loan at a preferential rate through the head of a corporation like Countrywide, which was very much dependent on favorable treatment by the government before it came crashing down at great expense to the taxpayers, is quite different from a private citizen's getting a mortgage at the same preferential rate.

Why? Because the private citizen is in no position to return the favor through political influence. Which is why the ethical standards expected of public officials are higher. Or at least should be. That crucial distinction used to be well understood. I'm not so sure it is now.