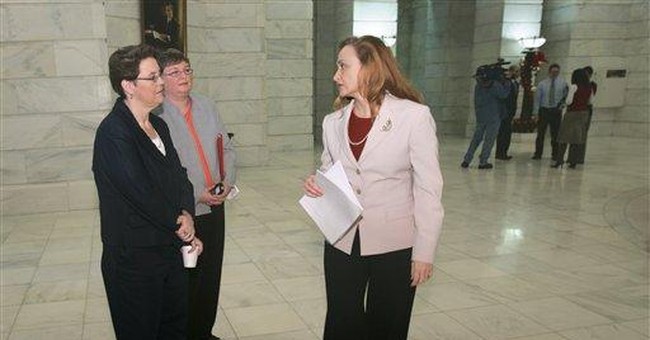 "This indictment is not about the law, but about politics -- ugly, anti-democratic politics."

The name Paul Jacob is familiar here in Arkansas, where he led the struggle to get term limits adopted in Arkansas. Then he went national as head of U.S. Term Limits and now runs an outfit called Citizens in Charge.

It seems Mr. Jacob has never outgrown his need to put the people, not the politicians, in control of their government. One needn't agree with his ideas to admire his commitment -- or defend his right to express them.

But anyone so interested in reform was bound to rile an establishment with an overweening sense of entitlement. So when Mr. Jacob and his merry band of reformers showed up in Oklahoma, they naturally attracted the attention of Drew Edmondson, that state's attorney (and zealot) general.

This time Paul Jacob and company were gathering signatures for a proposal that would have limited that state's legislators' power to spend, spend, spend. Their reward for this show of civic interest? Mr. Jacob and his fellow signature-gatherers, Rick Carpenter and Susan Johnson, were indicted.

The charge? Being part of a criminal conspiracy, to wit democracy. Or as General Edmondson phrased it, attempting to defraud the state by hiring folks from outside Oklahoma to help them gather signatures.

Even though, according to Paul Jacob, these reformers sought signatures only from duly registered Oklahomans. And had consulted state officials beforehand to make sure that they were following the rules. No matter. They were indicted anyway. Welcome to Oklahoma.

To quote the 10th Circuit, the right to circulate petitions in the United States of America is "core political speech," and so is fully protected by the First Amendment to the Constitution.

Thank you, founding fathers. Thank you, courts that uphold it.

This indictment has been hanging over the heads of Paul Jacob and those helping him garner signatures for a year. If convicted, they would face 10 years in prison for the heinous crime of taking part in American politics. This indictment should be quashed; it should never have been filed in the first place. As the 10th Circuit now has indicated.

But no right is safe unless citizens are willing to exercise and defend it. For there will always be Drew Edmondsons around to challenge rights they don't care for, and not even the Constitution of the United States, for all its virtues, is self-enforcing.

Only citizens willing to fight for their rights, like Paul Jacob, and courts that respect those rights, like the 10th Circuit, can keep the spirit of the Constitution alive.

The bad news is that General Edmondson may pursue his prosecution/persecution of Paul Jacob even after this appellate ruling. His official spokesman says Oklahoma's attorney general will appeal the 10th Circuit's decision. But now he'll have the First Amendment to contend with.

Paul Jacob, who once again has stood up for the rights of all Americans, deserves congratulations. Also, thanks and respect.

The Hon. Drew Edmondson, a bully with considerable power, a high state office and more ambition than respect for the rights of others, deserves something else. The word is he's planning to run for governor in Oklahoma. Which means the best rebuke for his misdirected zeal may yet be delivered by its voters.

The threats to the First Amendment are many and varied, and probably always will be. It may be in the nature of man to seek to suppress opinion we do not approve of; it's so much more direct then answering it and trusting public opinion to decide the issue. The best way to assure freedom of expression, no matter when and where it may be threatened, would be to have an army of utterly determined Paul Jacobs fighting for it.