Road Map to Power: the Subpoena as a Political Weapon 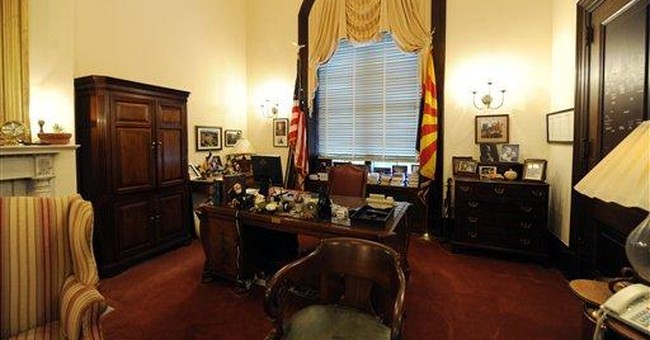 Not even the finest piece of machinery is safe from the ignorance or just malice of those operating it, as many an engineer has discovered. And not even the greatest works of statecraft, like the Constitution of the United States, are safe from politicians blinded by partisanship.

The Constitution's finely woven web of checks and balances, always shifting this way and that with the times, presents a tempting target for those who would ignore its subtleties for no better reason than that most familiar constant in political affairs, powerlust.

Which explains why a couple of congressional committees are issuing subpoenas to a Republican president's top aides. Having won control of both houses of Congress for the first time since 1992, the new Democratic majority is champing at the bit. At last vengeance is theirs.

Now a federal district judge has backed up this runaway majority. To quote the opinion of His Honor John D. Bates in upholding subpoenas to Harriet Meiers, a former presidential counsel, and Joshua Bolton, White House chief of staff: "The Executive cannot identify a single judicial opinion that recognizes absolute immunity for senior presidential advisors in this or any other context."

Maybe that's because Congress has never before gone to court to enforce a subpoena against top White House aides. It is Judge Bates' ruling that is unprecedented.

When it comes to the constitutional separation of powers, Congress and the president usually reach some artful compromise in order to avoid a showdown - and the kind of landmark decision that might permanently alter the delicate balance between the two branches. Which is what the White House has offered: a private interview with these aides off the record. But the Democrats are in no mood to compromise.

Think about it: How logical would it be for a Constitution that sets up different and theoretically co-equal branches of government to give one of them the power to issue subpoenas for high-ranking members of another?

Something tells me that Judge Bates would have seen the illogic of it if, instead of issuing subpoenas to senior officials of the executive branch, the House Judiciary Committee had issued one for a federal judge. We are all most sensitive when our own rights are threatened.

There may be no explicit statute or judicial precedent granting the executive branch independence from congressional harassment, but the independence of each branch of the federal government is implicit in the Constitution's separation of powers.

How equal would the different branches of government remain if the legislative were given access to the confidential discussions of the executive? And how long do you suppose such discussions would remain candid if a president's aides knew that what they said in confidence might not remain confidential?

The power to subpoena, to adapt a phrase of John Marshall's, is the power to destroy - as every president since Washington has understood. For this tug-of-war between the legislative and executive branches over the confidences of a president and his advisors has been going on as long as such confidences have been exchanged.

If the executive branch had to heed such a summons from the legislative, as Harry Truman explained when a congressional committee wanted to subpoena him, the constitutional separation of powers "would be shattered, and the president, contrary to the fundamental theories of constitutional government, would become a mere arm of the legislative branch of the government (for) he would feel during his term of office that his every act might be subject to official inquiry and possible distortion for political purposes."

But Nancy Pelosi, the still new speaker of the House, can't wait to extend Judge Bates' ruling; she calls it a "road map" that Congress can follow to elicit sworn testimony from presidential confidantes like Karl Rove, architect of George W. Bush's victories in the past two presidential elections. Hell hath no fury like a losing party finally come into congressional power.

But once the Democratic majority in Congress has taken its revenge and forced presidential advisers to testify, what president will ever again be able to count on candid, confidential advice? If this decision is a road map, it leads to no good.

Judge Bates did specify that these presidential advisors, once forced to appear at the witness table, could claim executive privilege in response to specific questions. But what would be the point of having them appear under oath if not to badger them into revealing confidences? Is it to have them plead executive privilege again and again, and so appear devious and untrustworthy - when they are actually upholding their trust as confidential advisors to a president of the United States? What would be the purpose of forcing them to appear except to create a little more political buzz in the midst of a heated presidential campaign?

Harry Truman had it right when he spoke about distortion for political purposes. That's the name of this whole congressional game. Which is why the only assuring aspect of this district judge's unprecedented and misguided ruling is that it can be appealed.