Oh, Please (Or Why Hillary's In Trouble) 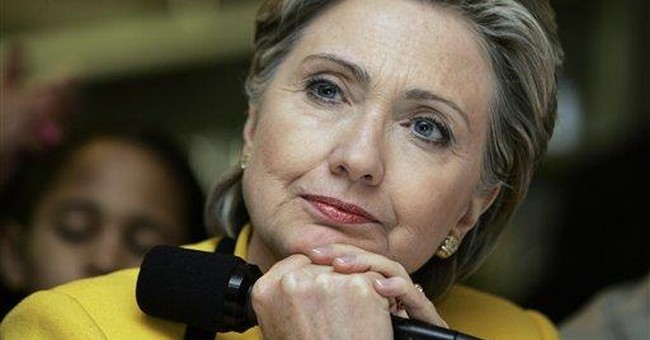 The other day an editor at a national journal asked if I'd do a piece explaining why voters were rejecting Hillary Clinton in primary after primary -11 in a row at last count.

I respectfully declined. For one things, I had something of the utmost importance to do last week: entertain visiting grandchildren. Not that writing the piece would have been hard. The hard part would have been boiling it down to the specified thousand words or so. There are so many reasons Hillary Clinton's presidential campaign is foundering, it would have been like having to abridge "War and Peace."

The way the editor put the question also struck me as less than fair, since I doubt so many millions across the country would have been voting against Sen./Mrs. Clinton if they hadn't been voting for Barack Obama.

Can you imagine any other rival - John Edwards? Bill Richardson? Chris Dodd? Joe Biden? - upsetting the best-laid plans for a Clinton Succession the way Barack Obama has done? Has there been anything like it since Eugene McCarthy and then Robert F. Kennedy swept so many young fans off their feet? Well, maybe the Beatles.

But as luck would have it, no sooner had I declined the editor's request than a short-lived story burst that perfectly illustrated why our own Evita has built up such a trust deficit with the American public over the years. The story revolved around the accusation that her young nemesis had committed plagiarism when he borrowed a rhetorical approach from his friend Deval Patrick, the governor of Massachusetts - right down to using some of the same words.

It seems that in the run-up to the Wisconsin primary, both the Clintons, like a tag-team, had accused Barack Obama of offering the voters words rather than solutions. Which gave him, or any other natural polemicist, the perfect opening. He responded by reciting a litany of words that had made a difference - from the revered opening of the Declaration of Independence, which proclaims that all men are created equal, to Franklin Delano Roosevelt's assurance that we have nothing to fear but fear itself. Without attribution!

Here in Little Rock, we'd made much the same point in response to the Clintons' denigrating the power of words. ("Words, Words, Words" -Arkansas Democrat-Gazette, February 17, 2008). Our editorial was laced with powerful words not just from the Declaration of Independence but, reflecting our own tastes, from Abraham Lincoln, John F. Kennedy and Winston Churchill.

The editorial was written well before Barack Obama delivered his riposte, and at the time we had only the barest knowledge of who Deval Patrick was, let alone what he'd said in a similar speech two years before. Does that make us plagiarists, too?

It's not as though, like Joe Biden years ago, Barack Obama had stolen an autobiographical speech from some British politician he'd chanced upon. That wasn't just plagiarism; it was a form of identity theft. Stealing somebody else's words is wrong; stealing his life story is just plain pathetic.

Any editorial writer knows the temptation of copping a good line. It can be irresistible at times. (Though when I do it, please note, it's not plagiarism but literary allusion.) But in this case, Barack Obama's response was so predictable that it didn't rise to the level of plagiarism.

To top it off, somebody unearthed a line from one of Bill Clinton's forgettable inaugural addresses that he'd co-opted from a dead friend's letter. Is he a plagiarist, too, by his wife's solemn-ass definition? Oh, please.

One reason Clinton femme is not doing well this election year is the widespread dread at the prospect of having to listen to her hopelessly wooden voice for the next four, even eight, years as Big Sister hectors the rest of us direct from the Oval Office. Always for our own good, of course, which of course she knows better than we ever could.

The big reason Hillary Clinton is in trouble is Hillary Clinton. Does the woman ever say anything original, striking, new? Her speeches seem little but a collection of tired slogans, flapping like tattered wash on a line. (Which is how Mencken the Magnificent described Warren G. Harding's oratorical style.) The lady is, however, safe from committing plagiarism. With her tinnest of ears, how would she recognize prose good enough to steal?

In contrast, Barack Obama's may be the best performance by a presidential candidate since William Jennings Bryan's virtuoso performance in 1896. Elegant, eloquent, electrifying, this Mister Cool flashes across the political scene like a meteor. What a contrast with Senator/Schoolmarm Clinton, who seems to be forever ordering us about in that toneless voice. The natural reaction to her attitude, a cross between condescension and compulsion, is to vote for somebody else.

Epilogue: After having been embarrassed by this hyped-up charge of plagiarism against her opponent, Senator Clinton denied her campaign was behind it. Instead, she blamed the accusation on that universal scapegoat, the press. ("It's not us making this charge, it's the media.")

That claim failed the simplest fact check. Her PR man, Howard Wolfson, had held an hour-long conference call to float the accusation, then repeated it the next day. Nor did she leave all the dirty work to her flack. She dutifully echoed him: "If your whole candidacy is about words, those words should be your own. That's what I think."

When she tried that shtick during her debate with clean-cut Mr. Obama in Austin last week, the groans from the audience were audible. When it comes to rhetorical style, a fast learner she isn't. Her reliance on war-room one-liners now seems terribly dated, a relic of the '90s. Obama's ability to rise above the mean fray has captured the imagination of a public tried of the old soundbite politics. Which may be why, at least for the moment, he's left her so far behind, and below.

Fighting dirty in a hard-fought campaign is one low thing; denying you did it is lower. Which is why, in a thousand words or so, American voters are rejecting Hillary! these days. There's a reason the word Clintonesque entered the language as a synonym for disingenuousness. It's also why Americans are rejecting the presidential candidate whose nomination, we were told not long ago, was inevitable.