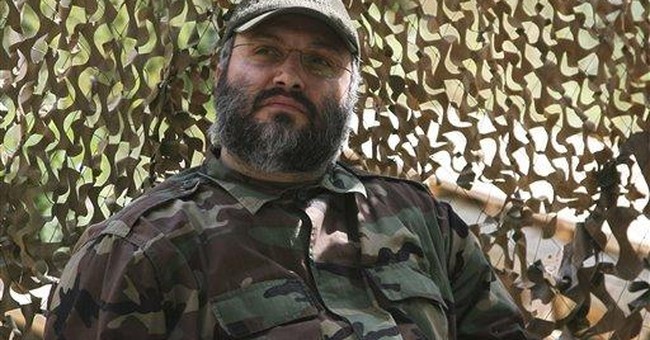 In another case of gross disregard for due process, a senior leader of Hezbollah was blown apart on a Damascus street last week without even a by-your-leave, let alone being read his Miranda rights.

Imad Mughniyeh's dossier may have been extensive, but he never got his day in court. Indeed, he seems to have done everything he could to avoid it. It's said he was unrecognizable even before last week's blast, having undergone plastic surgery more than once in order to avoid the kind of unpleasantness that finally did him in.

The notorious Mr. Mughniyeh met his end in K'far Soussa, a fashionable Damascus neighborhood, where he was said to have been visiting Iranian friends. (Syria is notably hospitable to foreigners, at least if they're supporting terrorists.)

From a humble peasant background, Imad Mughniyeh had risen to the top echelon of Hezbollah by dint of devoted service. His resume, aka rap sheet, goes back at least to 1983 and the bombing of the Marine barracks in Beirut, which killed more than 300. He's also been credited with the murder of 63 the same year in an attack on the American embassy there.

Imad Mughniyeh is said - mere hearsay again! - to have been behind the hijacking of a TWA jetliner that went on for 17 days and included the beating, torture and eventual murder of Petty Officer Robert Dean Stethem, U.S.N., who was singled out for special treatment. (At the time, Americans swore we would never forget him, but of course we pretty much did. Just as the memory of September 11, 2001, grows dim in the American memory, and those who recall it in this election year are dismissed as, yes, fearmongers.)

Space, and the shadowy nature of a career in terrorism, a crowded field these days, does not permit a comprehensive review of the exploits attributed to the sanguinary Mr. Mughniyeh, or a full account of the blood debt he ran up. Suffice it to say that more than one intelligence agency had a powerful incentive to collect it.

As head of Islamic Jihad in Lebanon during the chaotic 1980s, the tireless Mr. Mughniyeh supervised the kidnapping of dozens of Americans and other Westerners for ransom. But a man's got to make a living, doesn't he?

By the 1990s, Imad Mughniyeh was actually indicted - in Argentina of all places. He was charged with the bombing of a Jewish community center in Buenos Aires, which killed 85, and was named in an arrest warrant in connection with an earlier blast at the Israeli embassy there. His connections to both were so clear that even Argentina's lax authorities finally had to take notice. (Gentle Reader may recall that always simpatico Buenos Aires was the sometime home of a mild-mannered genocidist named Adolf Eichmann before he was extradited to Israel with shocking disregard for the formalities.)

The FBI almost caught up with the elusive Mr. Mughniyeh in 1995 during a scheduled layover of a Middle East Airlines flight in Saudi Arabia, but our ever helpful Saudi friends, with their well-known regard for civil liberties, waved the plane on. Again and again, the long arm of the law proved remarkably short in the case of Imad Mughniyeh. Not till last week did he who lived by the car bomb die by it.

But what solid evidence was there against the much sought-after Mr. Mughniyeh except a raft of investigations around the world, maybe a trial in absentia or two, and common knowledge?

As an Arkansas legislator of my acquaintance likes to tell people who say they've heard so much about him, "They never proved those charges!"

On the basis of apparently only coincidental if convincing evidence, the secretive Mr. Mughniyeh's nice car now has been reduced to a smudge on the asphalt of a fashionable Damascus street - without even a preliminary hearing, a writ of habeas corpus, or a FISA warrant. Where is the ACLU when you need it?

The sudden, not to say explosive demise of Mr. Mughniyeh is part of a disturbing pattern: Start by blowing up notorious terrorists and soon you'll be tapping their phone conversations without a warrant.

Just imagine what might have happened to this innocent (until proven guilty) subject if he had come into American custody. Why, he might have been waterboarded!

Oh, the horror. Look what happened when Khalid Sheikh Mohammed, now formally accused of having been the driving force behind the attacks of September 11th, was subjected to this watery treatment. Word is it took only 45 seconds or so before the previously recalcitrant terrorist decided it would be the better course of valor to reveal al-Qaida's table of organization in Europe, information that may have spared who knows how many lives.

But what are mere lives compared to the polemics of pundits, politicians and other such purists? Waterboarding, they have concluded, is torture, and torture is illegal, ergo waterboarding was, is and always will be illegal. No need for a court actually to rule. Yet this stubborn administration refuses to forswear its theoretical use in the always unforeseeable future, as if circumstances might still alter cases.

But that was before we had all these diviners who know the United States of America is so secure that such means will never be necessary to protect it. Call it a September 10th cast of mind. It was widespread before December 7, 1941, too.

As for Khalid Sheik Mohammed, who did fall into American hands, he is now to be tried by a military commission. But military trials for illegal combatants, even if they go back to George Washington's continental army, have come under fire, too, and by the time all the lawyering is done, the accused my have died peacefully of old age in some Club Fed.

Times have changed since Franklin Roosevelt used military commissions to try a group of German saboteurs, including one U.S. citizen, who'd been apprehended on these shores. Their trial took all of three weeks and promptly led to a number of summary executions. But of course that war was different; we intended to win it.

This country has many arrows in its quiver, and some need never be used, but why forswear a single one? The answer is obvious in this case: So that a prospective Khalid Sheik Mohammed can be assured that he need never fear being led to the edge of a watery grave, then returned to life only in order to reveal the names and whereabouts of his co-conspirators, and finally be executed without honor by order of a military court, as befits a mass murderer who has broken all the laws of war and humanity. Surely that kind of justice, and deterrence, belongs to a less enlightened era. Just as does the summary execution of Imad Mughniyeh last week just because he deserved it.

This latest, shocking disregard for the rights of a long-sought suspect finally tracked down in Damascus bears all the marks of a CIA operation, except of course that it was effective. Congress needs to round up the usual suspects at once, issue subpoenas all around, roundly condemn the Bush administration for its disregard for civil liberties, and begin a full-fledged investigation in that order. Sentence First, Verdict Afterwards!

But suspicion already has shifted to the Israelis, as it always does. To quote Yossi Alpher, a former Mossad agent, "No matter who did it, they're going to blame us." Why not? It's tradition!

Jerusalem, of course, has denied responsibility/credit for Mr. Mughniyeh's untimely end. Just as Israel used to officially explain that a suspicious structure on its territory - in the little town of Dimona in the Negev - was just a little ol' textile plant. Even if it did bear an uncanny resemblance to a nuclear reactor. Now the world is told that the Mossad had nothing to do with this latest little operation in Damascus. Uh huh.

Clearly an emergency session of the UN Security Council needs to be called at once and still another solemn resolution passed condemning Israel for another heinous act of self-defense. Once again it seems to have assassinated a terrorist leader for no better reason than his dedication to its destruction and to violence in general.

Surely no one can claim that justice was done in the murderous Mr. Mughniyeh's case. Considering the almost instantaneous effect of a well-placed car bomb, he scarcely suffered.