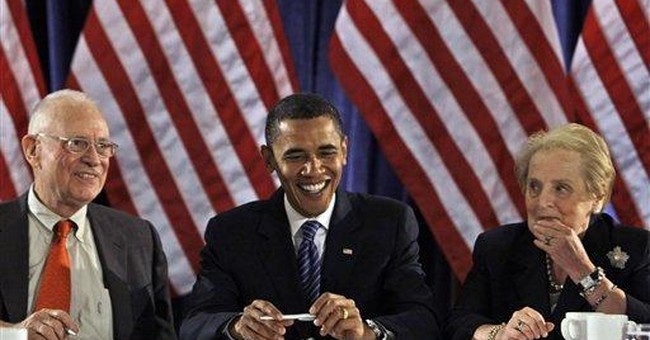 At the conclusion of his Father’s Day Sermon at the Apostolic Church of God in Chicago on Sunday, June 15 Senator Barack Obama made the point that his life revolves around his two little girls, and he fears for his little girls’ future in America without him as their president. The senator offered a litany of ills that—from his vantage point—currently plague America, which make America a terrible place to raise children:

• America is a country “that is still divided by race.”

• America is a country where “girls don’t have as much opportunity as boys do.”

• America is a country that is “hated around the world because we don’t cooperate with other nations.”

• America is a country that is in “grave danger because of what’s happening to the planet.”

In Senator Obama’s America there would be no income disparities because his confiscatory tax policies would take the wealth earned by the initiative of hard-working Americans and redistribute it to Americans who lack the initiative to work hard and make something of themselves. A recent editorial in The Detroit News properly characterizes Obama’s economic policy as “a war on wealth.”:

While giving part of the middle class a break, Obama would wage what could be described as a war on wealth through the tax code. He would restore the tax rates on those earning more than $250,000 a year to pre-2001 levels, remove the cap on payroll taxes for upper-income earners and push the current 15 percent capital gains tax rate to 28 percent.

While soaking the rich might have some political resonance, it’s risky to strip investment incentives from those most likely to create jobs. And despite the rhetoric, even with the Bush tax cuts, the top 1 percent of American earners still carry 35.6 percent of the tax burden, compared with 31.6 percent in 1996, according to the Internal Revenue Service.

In Senator Obama’s America there is still “a racial divide,” even though millions of white Americans went to the polls over the past six months and gave a black man a real opportunity to become President of the United States. A February 2005 San Francisco Chronicle article highlighted the gains being made by African-Americans in corporate America:

For executives who came of age in the post-civil rights era of the 1960s, the growing ranks of top black managers indicate race is becoming less of a factor, some say.

“I think tremendous progress has been made. It’s really a reflection that we’re making progress corporately,” said D. Steve Boland, 36, president and managing director of LandSafe Inc., a division of Countrywide Financial Corp.

“I think there’s a tremendous amount of opportunity.”

In Senator Obama’s America girls don’t have as much opportunity as boys, even though girls now make up the majority of undergrad students in our colleges and universities. Contrary to liberal propaganda, women have broken the glass ceiling. A recent story in USA Today highlights the gains female CEOs are making in corporate America:

Female CEOs running major U.S. corporations grew from nine to a record 12 in 2007. While that is only 2.4 percent of the Fortune 500, one trend is developing that might suggest that women are going mainstream.

For the second year in a row, the stock performance of women-led companies mirrored that of companies run by men. Some advocates of women in leadership such as Judy Rosener of the University of California, Irvine Graduate School of Management predict women will eventually out perform men.

There are currently seven female governors and 16 female United States Senators, the largest number of women to serve the Senate in history. And, oh, Hillary Clinton—a woman—garnered more of the popular vote in her race for the Democratic nomination than did Barack Obama.

In Senator Obama’s America the worst thing that could ever happen is for America not to be liked. We would be loved around the world because we would never defend ourselves against rogue dictators and terrorist states. Instead we would reason with them while they held knives to the throats of our citizens. Jim Geraghty at National Review reports “top Hamas political adviser Ahmed Yousef saying the terrorist group supports Obama’s foreign-policy vision and hopes he wins:

“We don’t mind–actually we like Mr. Obama. We hope he will (win) the election and I do believe he is like John Kennedy, great man with great principle, and he has a vision to change America to make it in a position to lead the world community but not with domination and arrogance,” Yousef said in response to a question about the group’s willingness to meet with either of the Democratic presidential candidates.

Senator Obama’s approach to the terror threat as president would be the same as Bill Clinton’s: Use the judicial system to prosecute elusive terrorists who blow up our ships and military installations, giving the terrorists more time to plot even bigger attacks on our citizens. We would only dare to defend ourselves if the anti-American United Nations gave us permission to do so.

In Senator Obama’s America we have more to fear from carbon emissions than we do from the associates of the 19 radical Islamists who flew planes into our buildings, murdering more than 3,000 of our citizens. The enemy of the state is the Big Three automakers along with all of American industry that dares to put the livelihood of its employees and communities above “global citizenship.”

Senator Obama is repulsed by the America he desires to lead as demonstrated by his suggestion in his victory speech in St. Paul, Minnesota that America has never provided care for the sick and good jobs for the jobless. His wife, Michelle, never had a reason, in all of her adult life, to be proud of America until her husband began campaigning for president.

Yet America truly is the land of opportunity. Only here could a black man run for president by disparaging his country, suggesting with a straight face that America has failed to provide equal opportunity for all of its citizens while he himself is the beneficiary of American opportunity, a child of privilege who graduated from one of the finest private high schools in America, educated at Columbia University and Harvard Law School, and who, after less than three years in the U. S. Senate, is poised to be the next president of the United States. Nonetheless, the America that provided this great opportunity for Senator Obama is not good enough for his own children.