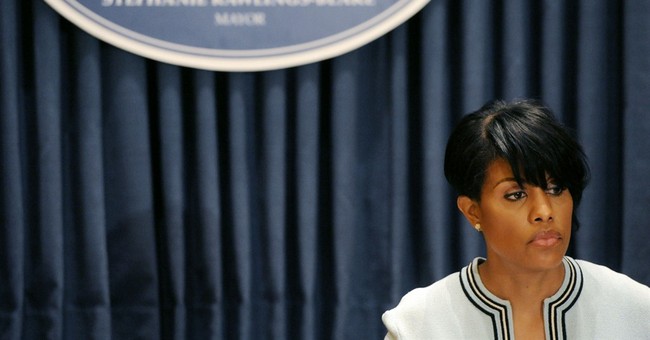 The kind of leadership that could have guided Baltimore’s protestors away from criminal behavior and ruining hundreds of small businesses during rioting is not what manifested itself when the city’s mayor publicly announced she gave those who want to “destroy” room to do so.

Criminally inclined adults and wayward juveniles in Baltimore battled law enforcement, broke into and looted stores and torched buildings on April 27, just hours after the funeral for 25-year-old Freddie Gray, who sustained a severe spine injury on April 12 prior to arriving at a police station while under arrest before he died from the trauma seven days later. But leadership ultimately emerged in Baltimore to help restore order and halt the unrest from hitting the depths of the April 1968 riots in the same city when six people ended up dead and 700 others were injured after the assassination in Memphis of Rev. Martin Luther King Jr., a champion of nonviolent civil disobedience.

City leaders missed a chance to head off the violence that escalated out of control on April 27, when increasingly disruptive protests began days earlier that stopped traffic, damaged cars and led the mayor and local law enforcement to delay baseball fans from leaving Orioles Park at Camden Yards due to “ongoing public safety issues’ after a game the night of April 25. However, Baltimore’s Mayor Sheila Rawlings-Blake waited until rioting broke out for several hours two days later on April 27 before calling Maryland Gov. Larry Hogan to ask for assistance.

Baltimore City businesses are estimated to have lost

Gov. Hogan, a Republican who won election last November by emphasizing the need for job creation in a state dominated by Democrats, said he had been waiting for several days for the mayor to call him for help that he provided within 30 seconds by declaring a state of emergency and deploying National Guardsmen. He also moved his office from the state Capitol in Annapolis to Baltimore City the next day, April 28, and brought Cabinet-level leaders of state agencies with him.

The governor visited the troubled neighborhoods and talked with many Baltimore City citizens, the vast majority of whom likely were Democrats who did not vote for him.

Rep. Elijah Cummings, a Democrat from Baltimore who has represented his district in Congress since 1996, also helped directly by using a bull horn to urge protestors to comply with the 10 p.m. curfew that the mayor imposed from

Unfortunately, the rioting resulted in 144 vehicle fires, 15 structure fires and nearly 200 arrests, according to the mayor's office. That damage occurred before the governor could deploy the 3,000 National Guard soldiers and 1,000 extra police officers that he mobilized from other jurisdictions to keep the peace in Baltimore City. In contrast, the 1968 Baltimore City riots stretched out three days and four nights, and included 5,500 arrests and the looting, the vandalizing or the burning of 1,050 businesses.

Modern-day Baltimore’s economic ills certainly were not helped by the looting, arson and other crimes that led to

This year’s protests began to take on a celebratory tone after Baltimore’s elected state’s attorney Marilyn Mosby announced charges of misconduct on Friday, May 1, against all six of the city’s police officers involved in Gray’s arrest. She won election against the incumbent state’s attorney in 2014 with a campaign that complained the traditional approach to crime fighting in Baltimore, a city in which 63.3% of the city’s residents are black or African-American, had failed.

But “there’s no excuse” for the kind of violence that occurred in Baltimore, President Obama said on the White House lawn the day after the April 27 riot.

However, strained relations between African-American communities and local police is a “slow-rolling crisis that has been going on for a long time,” President Obama said. Some police departments and communities should do “some soul-searching,” he added.

Community leaders in Baltimore have complained that the relationship between the city’s police and African-Americans reached a nadir during the mayoral tenure of likely presidential candidate Martin O’Malley when tens of thousands of arrests occurred for minor offenses, such as loitering and littering.

The hard-nosed policing also led to lawsuits from citizens who claimed abuse that culminated in $5.7 million in taxpayer-funded payouts between September 2014 and January 2011, according to a Baltimore Sun investigation. The total cost more than doubles when adding the $5.8 million spent by the city on legal fees to defend those claims against the police, according to the investigation.

The initial lenience of Baltimore’s mayor with violent protestors showed she was not quite ready for her first crisis in office when she acknowledged telling police officials to give protestors “space” to destroy. Public officials cannot allow rioters to ruin property without undermining citizens’ confidence in law enforcement and violating the trust of business owners who provide local people with goods and services, as well as jobs.

In contrast, Fr. James Riehle, who headed discipline at the University of Notre Dame during the Vietnam War era, once intervened personally to stop anti-war protestors from burning down a campus building. His leadership in defusing a protest effectively contrasts with how Baltimore’s mayor fumbled her opportunity and left it to others to rally citizens to pursue peace.

“Violence is not the answer,” said retired Baltimore Ravens linebacker Ray Lewis, who posted a powerful video online to denounce rioting. “Violence has never been the answer.”

Too many hard-working people “built this city,” said Lewis, who urged youths to stay off the streets and go home.

One Baltimore City mother, Toya Graham, won praise from Police Chief Anthony Batts for finding and removing her 16-year-old son Michael from a group of young people who were pelting police in the streets of her neighborhood with rocks. She commanded her son’s attention as he tried to walk away from her by slapping him on the side of his head a few times, pulling him away from the crowd and taking him home.

Graham, a single mom of six children, criticized the vandalism and violence against police officers but also said wanted to save her only son from becoming a Freddie Gray. She told CBS News she took action after spotting her 16-year-old son wearing a hoodie and a mask amid the protesters.

Gov. Hogan, Rep. Cummings, Lewis and Graham showed that they were up for the challenge of helping to restore peace in a city that rioters tried to tear apart.