Paul Driessen
|
Posted: Apr 14, 2018 12:01 AM
Share   Tweet
The opinions expressed by columnists are their own and do not necessarily represent the views of Townhall.com. 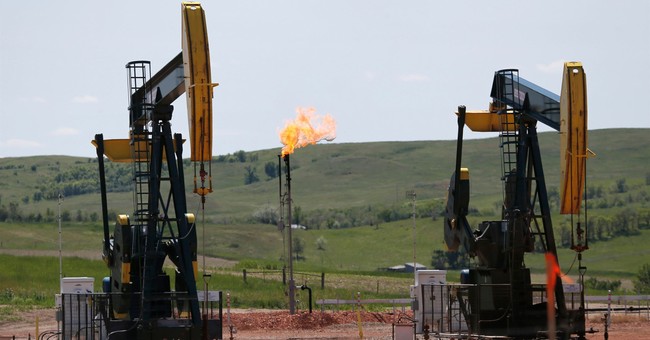 It’s a good thing environmentalists have double standards – or they wouldn’t have any standards at all.

Empire State legislators worry that anything above the current 0.0001% methane in Earth’s atmosphere will cause catastrophic climate change, and that pipelines will disturb wildlife habitats. So they oppose fracking for natural gas in New York and pipelines that would import the clean fuel from Pennsylvania.

But then they bribe or force rural and vacation area communities to accept dozens of towering wind turbines that impact thousands of acres, destroy scenic views, kill thousands of birds and bats annually, and affect the sleep and health of local residents – to generate pricey intermittent electricity that is sent on high voltage transmission lines to Albany, Manhattan and other distant cities.

To protect migratory birds and endangered bats, state and federal officials generally require that tree cutting be prohibited between mid-March and mid-October. Because the Atlantic Coast Pipeline is behind schedule, the companies sought approval to continue felling trees until May 15, to avoid further delays that could increase costs by $150-350 million. The request was denied.

Not surprisingly, the pipeline, logging and request to cut during migratory and mating season have put the developers, regulators and environmentalists at loggerheads. A 16-mile long segment through Virginia’s George Washington National Forest garnered particular attention.

Although the short segment would affect just 200 of the GWNF’s 1.1 million acres, the Virginia Wilderness Committee claimed any tree cutting in the area would create an “industrial zone” and “severely degrade some of the best remaining natural landscapes” in the Eastern USA. The Southern Environmental Law Center called the entire project “risky” and “unnecessary.” The groups prefer to “keep fossil fuels in the ground” and force a rapid transition to solar and wind energy.

One has to wonder how they would react to the far greater environmental impacts their “green” energy future would bring. Will they be true to their convictions, or continue applying double standards?

For example, using sun power to replace just the electricity from Virginia’s nearly 24/7/365 Lake Anna Nuclear Generating Station would require nearly 20,000 acres of solar panels that would provide power just 20-30% of the time. The rest of the time, the commonwealth would need fossil fuel or battery backup power – or homes, businesses, hospitals, internet researchers and environmentalist offices would have to be happy with electricity when it’s available, instead of when they need it.

That’s 100 times more land than needed for the pipeline, which will be underground and mostly invisible, whereas the highly visible solar panels would blanket former crop and habitat land for decades.

Natural gas and coal generate about 55 million megawatt-hours of Virginia’s annual electricity. Replacing that with wind power would require thousands of gigantic turbines, sprawling across a half-million acres of forest, farm and other lands. Backup battery arrays and transmission lines from wind farms to distant urban areas would require thousands of additional acres.

(This rough calculation recognizes that many turbines would have to be located in poor wind areas and would thus generate electricity only 15-20% of the time. It also assumes that two-thirds of windy day generation would charge batteries for seven straight windless days, and that each turbine requires 15 acres for blade sweep, operational airspace and access roads.)

The turbines, transmission lines and batteries would require millions of tons of concrete, steel, copper, neodymium, lithium, cobalt, petroleum-based composites and other raw materials; removing billions of tons of earth and rock to mine the ores; and burning prodigious amounts of fossil fuels in enormous smelters and factories to turn ores into finished components.

Most of that work will take place in Africa, China and other distant locations – out of sight, and out of mind for most Virginians, Americans and environmentalists. But as we are often admonished, we should act locally, think globally, and consider the horrendous environmental and health and safety conditions under which all these activities take place in those faraway lands.

Many turbines will be located on mountain ridges, where the winds blow best and most often. Ridge tops will be deforested, scenic vistas will be ruined, and turbines will slice and dice migratory birds, raptors and bats by the tens of thousands every year. Those that aren’t yet threatened or endangered soon will be.

The wind industry and many regulators and environmentalists consider those death tolls “incidental takings,” “acceptable” losses of “expendable” wildlife, essential for achieving the “climate-protecting” elimination of fossil fuels. The deaths are certainly not deliberate – so the December 2018 Interior Department decision to end the possibility of criminal prosecutions for them, under the 1918 Migratory Bird Treaty Act, makes sense.

However, when regulators allow industrial wind facilities in and near migratory routes, nesting areas and other places – where large numbers of eagles, hawks, falcons, geese, other birds and bats congregate – the number of deaths soars beyond “incidental” or “acceptable.” And as the number of US onshore wind turbines climbs from 40,000 a few years ago, to 52,000 today, to potentially millions under “keep oil, gas and coal in the ground” demands, the threat of decimation or extinction across wide areas skyrockets.

Even worse, as wildlife biologist Jim Wiegand and other experts have noted, the wind industry has gone to great lengths to hide the actual death tolls. For example, they look only right under towers and blades (when carcasses and maimed birds can be catapulted hundreds of yards by blades that move at nearly 200 mph at their tips), canvass areas only once every few weeks (ensuring that scavengers eat the evidence), and make wind farms off limits to independent investigators.

The bird and bat killings may not be criminal, but the fraud and cover-ups certainly are.

The attitudes, regulations and penalties associated with wind turbines also stand in stark contrast to the inflexible, heavy-handed approach that environmentalists, regulators and courts typically apply to permit applications for drilling, pipelines, grazing and other activities where sage grouse and lesser prairie chickens are involved – or requests to cut trees until May 15, to finish a Virginia pipeline.

The Fish & Wildlife Service, Center for Biological Diversity and Audubon Society go apoplectic in those circumstances. (Audubon was outraged that Interior decriminalized accidental deaths of birds in oilfield waste pits.) But their silence over the growing bird and bat slaughter by wind turbines has been deafening.

These attitudes and policies scream “double standards!” Indeed, consistent bird and bat protection policies would fairly and logically mean banning turbines in and near habitats, refuges and flyways – or shutting them down during mating, nesting and migratory seasons.

Paul Driessen is senior policy analyst for the Committee For A Constructive Tomorrow (www.CFACT.org) and author of books and articles on energy and environmental policy.

Ex-Gorsuch Law Clerk Takes a Blowtorch to the Imaginary Law Violations the FBI Cited in Trump Raid
Townhall
Sam Harris clarifies that clip where he says he wouldn't have cared if Hunter Biden had children's bodies in his basement
Twitchy
Harriet Hageman Accused of Lying About Liz Cheney Concession, Then She Released the Voicemail
Redstate
Feds Swear Trump Investigation Was in 'EARLY STAGES' When FBI Stormed Mar-a-Lago. Oh, Really?
PJ Media