Paul Driessen
|
Posted: Oct 21, 2017 12:01 AM
Share   Tweet
The opinions expressed by columnists are their own and do not necessarily represent the views of Townhall.com. 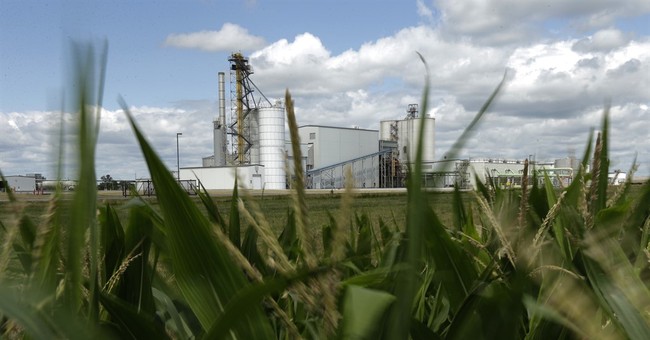 Despite my well crafted, highly persuasive articles over the years (here, here and here, for example), corn ethanol and other biofuel mandates remain embedded in US law. As we have learned, once a government program is created, it becomes virtually impossible to eliminate, revise or even trim fat from it.

This year, it looked like this “rule of perpetuity” might finally change. The Trump-Pruitt Environmental Protection Agency proposed to use its “waiver authority” to reduce its 2018 biodiesel requirement by 15% (315 million gallons) and (possibly) lower the 2019 total down to the 1-billion-gallon minimum mandated by Congress. The proposed action would not affect corn or other ethanol production and blending requirements, despite growing problems with incorporating more ethanol into gasoline.

The biodiesel proposal reflects hard realities. Biodiesel costs over $1.30 more than regular diesel made from petroleum. Despite this far higher cost, it gets fewer miles per gallon than conventional biodiesel. Domestic US producers are unable to make enough biodiesel. In fact, their output is at least 250 million gallons below the mandated amount; the rest is imported, keeping America reliant on foreign suppliers.

Some analyses conclude that domestic biodiesel output is actually one billion gallons below what the mandate explicitly and in reality requires. So the USA is truly reliant on imports to meet the quota.

Since biodiesel is made from soybean, palm, canola, flax, sunflower and other plant oils, those crops must be grown on millions of acres of land, using enormous amounts of water, fertilizer, pesticides and energy. (Biodiesel can also be made from waste vegetable oil and animal fat, but those are in minuscule supply.)

The demand for biodiesel is down. Volkswagen’s fraudulent emissions tampering reduced demand for diesel-powered cars, and more people are driving electric and hybrid vehicles. Fraud is also rampant over Renewable Identification Numbers that must be issued for every gallon of biodiesel produced and sold.

Moreover, the primary justifications for biodiesel (and all biofuels) are missing in action. Fracking and other technologies have ended worries about imminent depletion of petroleum supplies, and a growing body of evidence shows that climate chaos due to human emissions of (plant-fertilizing) carbon dioxide exists almost entirely in computer models and data manipulation – not in planetary reality.

In addition, like any carbon-based fuel, biodiesel emits carbon dioxide when it is burned. In fact, over the entire life cycle of growing and harvesting crops, turning them into fuel, transporting and using them in vehicles, ethanol and biodiesel emit as much CO2 as petroleum – and require infinitely more acreage.

However, anyone who thinks reality, logic and common sense do or should play an essential role in public policy decisions has an abysmal understanding of how the Washington, DC Swamp operates. Programs, mandates and subsidies beget vocal beneficiaries, industries, lobbyists, and crony corporatist arrangements between them and elected representatives – who receive dinners, trips and campaign contributions in exchange for votes that perpetuate programs, mandates, subsidies and electoral success.

No sooner had EPA announced its intended biodiesel reductions, than the Swamp Denizens rose up in righteous wrath and united indignity. Several US Senators threatened to block confirmation of President Trump’s EPA nominees unless the agency abandons its plans. Confronted with this reality, EPA caved. The biodiesel quotas remain and will increase even further. The DC Swamp won – this round.

It’s pretty easy to understand why Illinois Democratic Senator Tammy Duckworth would battle EPA over biodiesel. Hers is a farm state, with a lot of Big Biofuel farmers and distillers, and her party has become solidly anti-hydrocarbon and anti-Trump. These days, Democrats line up largely in lockstep in opposition to domestic drilling, pipelines and refineries – though hardly on any personal actions to reduce fossil fuel use in their homes, offices, vehicles or especially air travel.

However, biofuel advocacy and confirmation blocking have become bipartisan. Senator Charles Grassley (R-Iowa) is leading the charge. The powerful Republican chairs the Judiciary Committee and serves on the Agriculture, Budget, Finance and Tax Committees.  He was once a self-proclaimed “pig farmer,” but these days he and his family are mostly involved in growing corn for ethanol and soybeans for biodiesel.

Indeed, the Grassley family together collected $1.4 million in farm subsidies between 1995 and 2014.

Even Senator Joni Ernst (also R-Iowa) is on the nominee blockade bandwagon. She may have been raised on a pig farm and learned how to drain swamps, kill pork and make special interests squeal. (Recall the famous campaign ad.) But she is also on the Ag Committee, and Iowa is the corn state. Indeed, corn grown on acreage equivalent to her entire state (36 million acres) is converted to ethanol every year.

These senators (and many House and Senate colleagues) are determined that ethanol, biodiesel and other biofuel mandates and “targets” will always and only go in one direction: upward.

They are all convinced that any change, no matter how small or how focused on foreign imports of biodiesel, is a potential threat to the entire biofuel program, including their beloved corn ethanol program. (Even worse, the EPA proposal could threaten their future campaign coffers and reelection prospects.)

They’ve promised to “oppose any effort” to reduce blending levels for ethanol in gasoline or “undermine the integrity” of biofuel programs. They threatened to “vote down” the President’s EPA nominees unless the agency totally scrubbed its plan to reduce biodiesel mandates and imports. They claim these actions are necessary to protect energy innovation, fuel diversity and jobs. Some still talk about biofuel preventing petroleum depletion and dangerous manmade climate change.

Perhaps they are all smoking that special tobacco product they sell in Boulder, Colorado. But they have powerful positions and powerful friends, and they mean business. So the EPA and White House capitulated.

The Renewable Fuels Standards (RFS) legislation began as an environmental program. But it has become a major farm subsidy program – and a vital campaign contributions program. It distorts markets by creating cash flows that people depend on for their livelihoods, lifestyles and lobbying fees.

In the case of ethanol, it involves growing corn that requires millions of acres of land, billions of gallons of water, and vast quantities of pesticides, fertilizers, tractor fuel and natural gas … to produce energy that drives up food prices, damages small engines, and gets one-third fewer miles per gallon than gasoline.

With biodiesel, we have congressionally mandated production levels that are unnecessary and unrealistic. They are far above what farmers have shown they can grow and produce here in the USA. The mandates are also well above the amounts of biodiesel we need. And yet the laws require that production from biodiesel, corn ethanol and advanced biofuels (from switchgrass, et cetera) climbs steadily year after year.

For once we have some people at EPA who might – and should – look into all of this, and implement practical, defensible reductions in these domestic and foreign biofuel levels. We should not saddle them with more politically driven mandates that hurt the environment and American consumers.

But we did. The Washington Swamp won. That’s how it operates. However, the battle is not over. It has merely been joined. Next time around, there may not be critical nominees to hold hostage.