Paul Driessen
|
Posted: Sep 16, 2017 12:30 PM
Share   Tweet
The opinions expressed by columnists are their own and do not necessarily represent the views of Townhall.com. 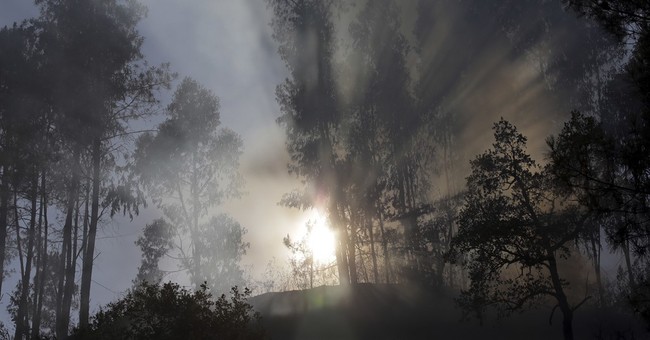 Westerners are delighted, and I’ve advocated such reforms since my days on Capitol Hill in the 1980s.

As of September 12, amid this typically long, hot, dry summer out West, 62 major forest fires are burning in nine states, the National Interagency Fire Center reports. The Interior Department and Ag Department’s Forest Service have already spent over $2 billion fighting them. That’s about what they spent in all of 2015, previously the most costly wildfire season ever, and this season has another month or more to go. The states themselves have spent hundreds of millions more battling these conflagrations.

Millions of acres of forest have disappeared in smoke and flames – 1.1 million in Montana alone. All told, acreage larger than New Jersey has burned already. However, even this hides the real tragedies.

The infernos exterminate wildlife habitats, roast eagle and spotted owl fledglings alive in their nests, imolate wildlife that can’t run fast enough, leave surviving animals to starve for lack of food, and incinerate organic matter and nearly every living creature in the thin soils. They turn trout streams into fish boils, minus the veggies and seasonings. Future downpours and rapid snowmelts bring widespread soil erosion into streambeds. Many areas will not grow trees or recover their biodiversity for decades.

Most horrifically, the conflagrations threaten homes and entire communities. They kill fire fighters and families that cannot get away quickly enough, or get trapped by sudden walls of flames.

In 2012, two huge fires near Fort Collins and Colorado Springs, Colorado burned 610 homes, leaving little more than ashes, chimneys and memories. Tens of thousands of people had to be evacuated through smoke and ash that turned daytime into choking night skies. Four people died. A 1994 fire near Glenwood Springs, CO burned 14 young firefighters to death.

These are not “natural” fires of environmentalist lore, or “ordinary” fires like those that occur in state and privately owned and managed forests. Endless layers of laws, regulations, judicial decrees and guidelines for Interior and Forest Service lands have meant that most western forests have been managed like our 109 million acres of designated wilderness: they are hardly managed at all.

Environmentalists abhor timber cutting on federal lands, especially if trees might feed profit-making sawmills. They would rather see trees burn, than let someone cut them. They constantly file lawsuits to block any cutting, and too many judges are all too happy to support their radical ideas and policies.

Thus, even selective cutting to thin dense stands of timber, or remove trees killed by beetles or fires, is rarely permitted. Even fire fighting and suppression are often allowed only if a fire was clearly caused by arson, careless campers or other human action – but not if lightning ignited it. Then it’s allowed to burn, until a raging inferno is roaring over a ridge toward a rural or suburban community.

The result is easy to predict. Thousands of thin trees grow on acreage that should support just a few hundred full-sized mature trees. Tens of billions of these scrawny trees mix with 6.3 billion dead trees that the Forest Service says still stand in eleven western states. Vast forests are little more than big trees amid closely bunched matchsticks and underbrush, drying out in hot, dry western summers and droughts – waiting for lightning bolts, sparks, untended campfires or arsonists to start super-heated conflagrations.

Most of this heat goes upward, but super-high temperatures incinerate soil organisms and organic matter in thin western soils that afterward can support only stunted, spindly trees for decades.

These fires also emit prodigious quantities of carbon dioxide, fine particulates and other pollutants – including mercury, which is absorbed by tree roots from rocks and soils that contain this metal, and then lofted into the sky when the trees burn.

Rabid greens ignore these hard realities – and divert discussions back to their favorite ideological talking points. The problem isn’t too many trees, they insist. It’s global warming and climate change. That’s why western states are having droughts, long fire seasons, and high winds that send flames past fire breaks.

Global warming, global cooling and climate change have been part of the Earth and human experience from time immemorial. Natural climate fluctuations brought the multi-decade Anasazi drought, the Dust Bowl and other dry spells to our western states. To suggest that this summer’s heat and drought are somehow due to mankind’s fossil fuel use and related emissions is deliberately delusional nonsense.

Neither these activists nor anyone in Al Gore’s climate chaos consortium can demonstrate or calibrate a human connection to droughts or fires. Computer models, rants and rhetoric do not suffice. And even if manmade (plant-fertilizing) carbon dioxide does play a role amid the many powerful natural forces that have always controlled climate and weather, reducing US fossil fuel use would have zero effect.

China, India, Indonesia and Vietnam alone are building 590 new coal-fired power plants right now, on top of the hundreds they have constructed over the past decade. Overall, more than 1,600 new coal generators are planned or under construction in 62 countries. People in developing countries are also driving far more vehicles and making great strides in improving their health and living standards. They will not stop.

Western conflagrations jump fire breaks because these ferocious fires are fueled by the unprecedented increase in combustibles that radical green policies have created. These monstrous fires generate their own high winds and even mini tornados that carry burning branches high into the air, to be deposited hundreds of feet away, where they ignite new fires. It has nothing to do with climate change.

Remove some of that fuel – and fires won get so big, hot, powerful and destructive. We should also do what a few environmentalist groups have called for: manage more areas around buildings and homes – clearing away brush that federal agencies and these same groups have long demanded be left in place.

Finally, we should be using more of the readily available modern technologies like FireIce from GelTech Solutions. They can suppress and extinguish fires, and protect homes, much better than water alone.

The last bogus eco-activist claim is that “fire isn’t destruction; it’s renewal. It creates stronger, more diverse ecosystems.” That may be true in managed forests, timber stands in less tinder-dry states, and forests that have undergone repeated, non-devastating fires. For all the reason presented above, it is not true for government owned and mismanaged forests in our western states.

Over 50 million acres (equal to Minnesota) are at risk of catastrophic wildfires. Right now, we are spending billions of dollars we don’t have, should not have to spend fighting all these monstrous killer blazes, and should have available to improve forests and parks and fund other vital programs.

These forests could and should create jobs and generate revenues in states where far too many lands, timber, oil and minerals have been placed off limits – primarily by urban politicians, judges and radical activists who seem determined to drive people off these western lands, turn them into playgrounds for the wealthy, and roll back other Americans’ living standards and well-being. Cleaning out dead, diseased, burned, overgrown trees would bring countless benefits. It would make our forests healthy again.

Above all, the new Interior-Agriculture approach would demonstrate that Rural Lives Matter.