Paul Driessen
|
Posted: Sep 09, 2017 12:01 AM
Share   Tweet
The opinions expressed by columnists are their own and do not necessarily represent the views of Townhall.com. 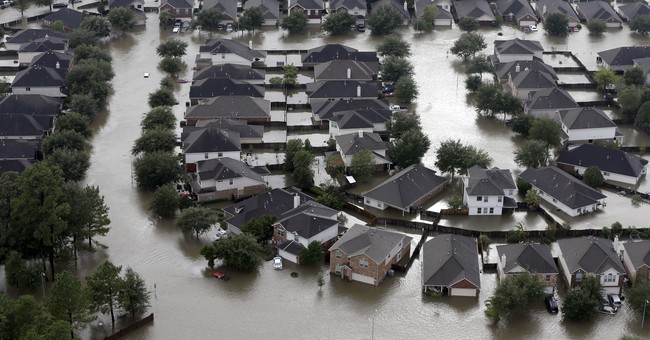 When a man knows he is to be hanged in a fortnight,” English essayist Samuel Johnson observed 240 years ago, “it concentrates his mind wonderfully.” That’s certainly true in the climate change arena.

After ending US participation in the Paris climate treaty and abolishing many government restrictions on fossil fuel use, the Trump Administration began preparing red team-blue team examinations of the science behind claims of “dangerous manmade climate change.” Asian, African, and even European countries are building still more coal and gas-fired power plants. A recent poll found that only 28% of Americans think climate scientists understand the causes of global climate change “very well.”

All this is certainly concentrating the minds of climate alarmists, who are also taking former Obama advisor Rahm Emanuel’s cynical advice to “never let a crisis go to waste.” The new climate hustle is on.

The record 12-year absence of Category 3-5 hurricanes striking the United States had to end at some point, and Hurricane Harvey definitely underscored our recent good fortune. Alarmists wasted no time in asserting that Harvey was due to or worsened by mankind’s greenhouse gas emissions. As Irma beefs up and brings more widespread devastation, it too will likely achieve iconic climate chaos status.

Fossil-fuel-driven global warming made the Gulf of Mexico warmer and its air more moisture-laden, thereby feeding Harvey’s strength and moisture content, said one climate and weather “expert.” A century ago a storm along the same path would have been less intense and brought less rain, claimed another.

Harvey stalled over Houston because manmade climate change caused “a greatly expanded subtropical high pressure system,” which led to “very weak prevailing winds” that failed to steer the storm back into the Gulf of Mexico, a third putative expert asserted. An Antifa climate activist ranted that Harvey was due to “this administration’s climate denial, racism, and callousness.” Another railed about climate murder.

Any journey back to climate and weather reality should begin by noting that doctrines of manmade climate cataclysm asserted that the record 12-year interlude between major US hurricanes should never have happened. The overall reduction in major hurricanes in recent decades shouldn’t have either.

Weather historian Roger Pielke, Jr. says 14 Category 4-5 hurricanes made landfall along US coasts, during the 44-year period between 1926 and 1969. In the ensuing 47 years, 1970 to 2017, just four struck the US mainland, including Harvey. Some, like the 1935 Labor Day Hurricane in the Florida Keys, were incredibly powerful. NOAA’s Hurricane Research Division counts 10 Category 4-5 monsters between 1920 and 1969 (50 years), but only four since then. Either way, it’s a huge reduction.

Harvey lost its Cat 4 status shortly after making landfall, so winds declined as a major factor after they destroyed Rockport. What devastated Houston was the vast quantity of rain: some 19 trillion gallons of water in the Houston/South Texas area alone. By comparison, Chesapeake Bay holds 18 trillion gallons.

Worse, all this rain came in just a few days. Harris County (Greater Houston) alone got 1 trillion gallons. The Mont Belvieu area got 51.9 inches of rain – the highest rainfall total in any storm in US history. The 16 inches of rain August 27 at George Bush Airport is the single wettest day in Houston history.

However, previous storms were not far behind. Hurricane Easy deluged Florida with 45.2 inches in 1950; Tropical Cyclone Amelia dumped 48 inches on Texas in 1978; Tropical Storm Claudette inundated Texas with 54 inches in 1979. In fact, Claudette emptied 43 inches in just 24 hours on the little town of Alvin, Texas; that one-day record still stands. Buffalo Bayou topped out at 62.7 feet this time – but it reached 54.4 feet in 1935. All the Texas storms were along its Gulf Coast.

All you need is the right (i.e., wrong) confluence of events. As climatologist Dr. Roy Spencer explains, when a strong tropical cyclone has access to abundant moisture evaporating from a large body of warm water like the Gulf of Mexico – and that situation combines with little inland movement by the cyclone – you get record rain. So why did Hurricane Harvey settle in for a long haul over Houston?

There was no “expanded subtropical high pressure zone,” WeatherBELL Analytics chief forecaster Joe Bastardi points out. What happened with Harvey was the “exact opposite.” What trapped Harvey was a predicted MJO phase 2 – a major cool trough associated with the eastward moving disturbance of clouds, rainfall, winds and pressure that traverses the planet every 30 to 60 days or so. “Normally,” there would be no major trough that far south to stop a storm, Bastardi notes. But this time there was.

So instead of moving inland (which it did later), Harvey stalled. Its circular winds remained stuck in the trough (or what Weather Channel founder John Coleman calls a “void”) until surface pressures around it changed, and the storm was able to move to the northeast. It was “an unusual pattern,” an unusual confluence of events, says Coleman, but it was “not unprecedented.” Amelia and Claudette demonstrated that. Name just one hurricane that was ever “steered back” into the Gulf of Mexico, Bastardi challenged.

If the exact same tropical storm had simply moved inland at 13-15 mph while generating the same total amount of rain, the downpours would have been spread over a much wider area, perhaps many states, with no flooding disaster, Dr. Spencer points out. But Harvey did not move inland for days.

In fact, “hurricanes that enter Texas often stall or meander, and are very wet. That’s why half of the top ten wettest US tropical rainfall events have been in Texas,” adds consulting meteorologist Joe D’Aleo. It has nothing to do with human-caused climate change.

“Hurricanes are nature’s way of taking heat out of the tropics and re-distributing it to the temperate regions,” when summers are hot, and waters are warm, as the planet rotates, notes Bastardi. They require a unique combination of circumstances, with sufficiently warm sea surface temperatures being just one, adds Spencer. “The Gulf of Mexico is warm enough every summer to produce a major hurricane.

“But you also usually need a pre-existing cyclonic circulation or wave, which almost always can be traced back to the coast of Africa.” Why some systems intensify, and others don’t is still not well understood.

Multi-decadal sea surface temperature (SST) oscillations in the Atlantic occur on a cyclical basis, as does the total energy accumulated each year by tropical storms and hurricanes. However, their origins and mechanisms are likewise still unknown, Dr. Michel de Rougemont notes.

It is impossible right now to separate all these natural factors from alleged manmade influences. Or to look at hurricane history and August SST anomalies over the years – and discern patterns that can be attributed to human-caused (or even natural) global warming. Those claiming an ability to do so must prove their claims, produce their data and algorithms, defend their thesis before red team experts, and not be allowed to assert “proprietary” data or point to secretive black box computer model simulations.

Houston flooded not just because of the sheer volume of water. The city is built on impermeable clays and former swamp lands that have subsided in many places over the decades from the steadily increasing weight of buildings, homes, other structures, and concrete and asphalt roads and runways. It is close to sea level, with little topographic relief, insufficient drainage, and reservoirs that can handle most big rains but not those that Harvey brought. Deluges thus have few places to go, except upward, over dams and into homes. It’s no wonder the area has experienced floods throughout its history.

To use this tragedy to advance anti-fossil fuel agendas is disgraceful. Right now, and for the foreseeable future, they are the bedrock of our civilization, jobs, living standards, well-being, and life spans. To drive up their costs, or replace them now with expensive, unreliable “renewable” energy would be disastrous.

Fossil fuels allow us to track storms, warn people and get them out of harm’s way. They bring rescue boats, helicopters, high-rider vehicles, water, food, clothing and new building materials to stricken communities. They could do the same for Bangladesh and other countries that face natural disasters – and have been bereft of electricity and decent living standards for too many generations.

Meanwhile, those in the path of Irma (and storms that will inevitably follow) should prepare their family, home, neighborhood, community, and state. Houston should prepare now for the next one.