Paul Driessen
|
Posted: Aug 04, 2017 12:01 AM
Share   Tweet
The opinions expressed by columnists are their own and do not necessarily represent the views of Townhall.com. 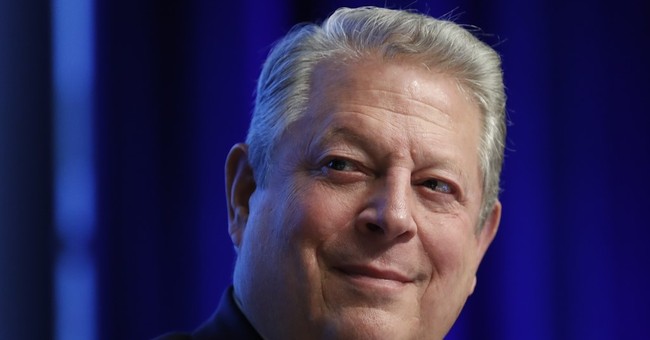 Before I could enjoy a movie last week, I was forced to endure five minutes of climate and weather fear-mongering, when the theater previewed Al Gore’s “Inconvenient Sequel.” His absurd attempt to pin every weather disaster of the past decade on humanity’s fossil fuel use felt like fifty minutes of water boarding.

Mr. Gore has made tens of millions of dollars pedaling this nonsense and his demand that our society be subjected to a “wrenching transformation” from oil, natural gas and coal to a utopian make-believe world of reduced living standards powered by biofuels, wind and solar power, electric vehicles and batteries.

Every prediction has been falsified by actual events: from soaring temperatures to an ice-free Arctic to monstrous hurricanes that have not hit the USA since 2005. His pathetic attempt to blame New York City floods during Superstorm Sandy ignored inconvenient truths like construction that narrowed the Hudson River by hundreds of feet, forcing any incoming water to rise higher … and flood Manhattan. Mr. Gore conveniently ignores even well known climate change and weather events of past centuries. No wonder this devotee of SUVs, private jets and multiple homes doesn’t have the spine to debate anyone over these issues. When he lectures us, he won’t even take questions that he has not preapproved.

Climate Change: The Facts 2017 is the third in a series. Dedicated to the memory of the late, eminent Aussie geologist and climate scientist Bob Carter, its 22 chapters cover climate changes through the ages, the multiple natural forces that primarily drive climate and weather fluctuations, devious tricks that alarmist researchers have used to modify and “homogenize” actual temperature data, attempts to silence experts who focus on natural causes of climate change or on adaptation rather than costly “prevention,’ the historic context behind climate debates, and coral reef resilience amid alleged ocean “acidification.”

Assumed coral, shellfish and other asserted disasters from even slight changes in ocean pH are based on computer simulations that often extrapolate from laboratory experiments. As John Abbott, Peter Ridd and Jennifer Marohasy point out, some of those experiments actually added hydrochloric acid to fish tanks to simulate acidification presumed to result from slight increases in atmospheric carbon dioxide!

Carbon dioxide has been demonized because it is a byproduct of fossil fuel use, and many activists want to eliminate the oil, natural gas and coal that provide over 80% of US and global energy. Moreover, while it helps trap solar heat and keep Earth inhabitable, CO2 is the polar opposite of a “dangerous pollutant.”

CO2 is vital plant food and fertilizer, essential for photosynthesis. Without it, life on Earth would cease to exist. In conjunction with slightly warmer global temperatures since the Little Ice Age ended (and modern industrial era began), rising atmospheric CO2 levels are helping to “green” the planet, by spurring crop, forest and grassland plants to grow faster and better, Craig Idso and Matt Ridley explain. 25-50% of vegetated parts of our planet have gotten greener over the past 33 years, from the tropics to the Arctic, and 70% of that greening is due to higher levels of CO2 in the atmosphere. Only 4% has gotten browner.

Ian Plimer, Ken Ring and Nicola Scafetta discuss natural climate cycles and the long planetary and human experience with major climate changes and weather events. Nothing seen today is unprecedented, and most is far more benign than in the past, they note. Bjorn Lomborg and other authors explain why we must end our obsession with the “climate crisis” and other exaggerated threats, and with false solutions to a greatly exaggerated climate problem. We need to spend our limited time, money and resources on the many real, pressing problems that confront mankind in developed and developing nations alike.

Then, in just two centuries, via discovery and progress powered by fossil fuels, billions of people doubled their life spans and became healthy, well fed, prosperous, increasingly mobile, and able to afford wondrous medical and other technologies, foods, services, luxuries and leisure-time activities that previous generations could not even imagine.

“How can we not feel gratitude and appreciation for this progress, especially in the fields of medicine, engineering and communications?” His Holiness asks. Unfortunately, he then presents romanticized references to bygone eras that never existed: consistently mild climates, benevolent natural worlds and idyllic pastoral lives. He insists that Earth’s poorest people will soon face “grave existential risks” from planetary warming, if we do not quickly and significantly reduce fossil fuel use.

He ignores the absence of Real World evidence that greenhouse gases are causing climate chaos – and the compelling evidence that fossil fuels continue to bring enormous benefits.

Over the past three decades, oil, gas and especially coal have helped 1.3 billion more people get electricity and escape debilitating energy and economic poverty. China connected 99% of its population to the grid, mostly with coal. Its average citizens are now ten times richer and live 32 years longer than their predecessors did barely five decades previously.

But more than 1.2 billion people (more than the USA, Canada, Mexico and Europe combined) still do not have electricity; another 2 billion have electrical power only sporadically and unpredictably. In Sub-Saharan Africa, 700 million still cook and heat with “renewable” wood, charcoal and animal dung.

Hundreds of millions get horribly sick – and five million die – every year from lung and intestinal diseases, due to breathing smoke from open fires and not having refrigeration, clean water and safe food. Hundreds of millions are starving or malnourished. Nearly 3 billion survive on a few dollars per day.

These destitute masses simply want to take their rightful, God-given places among Earth’s healthy and prosperous people. Instead, they are being told that “wouldn’t be sustainable.” They’re being told that improving their health, living standards and life spans is less important than avoiding the “looming climate cataclysm” that “threatens the very survival” of our wildlife, civilization and planet.

These claims – and the false solutions being offered to dire problems that exist only in alarmist movies, press releases and computer models – examine only far-fetched risks that fossil fuels supposedly mightcause. They never consider the numerous dangers and damages those fuels reduce, prevent or eliminate. These attitudes are anti-science, anti-human, unjust, unethical – and genocidal.

Noted observer of popular culture Clive James wraps up this fascinating book. Proponents of man-made climate catastrophe asked us for so many leaps of faith that they were bound to run out of credibility in the end, he says. And yet it would be unwise to think mankind’s capacity to believe in fashionable nonsense can be cured anytime soon. When this “threat” collapses, it will be replaced with another.

Al Gore, the IPCC, alarmist modelers and researchers, and EPA’s “social cost of carbon” scheme and carbon dioxide “endangerment” decision have all depended on the climate bogeyman. Eternal vigilance, education and pushback by the rest of us will be needed for years to come.