Paul Driessen
|
Posted: Apr 30, 2016 12:01 AM
Share   Tweet
The opinions expressed by columnists are their own and do not necessarily represent the views of Townhall.com. 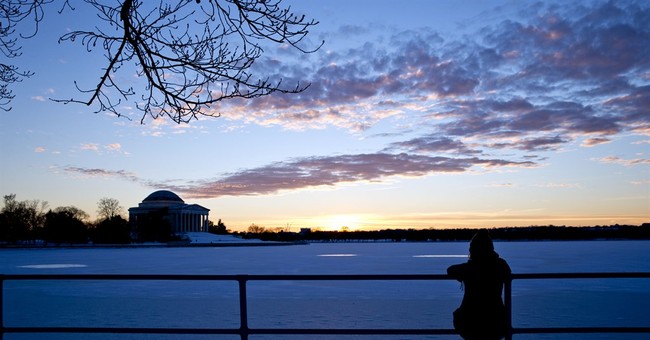 Have you ever wondered how the LA Times, Associated Press, Weather Channel and your local media always seem to present similar one-sided stories on climate change, fossil fuels, renewable energy and other environmental issues? How their assertions become “common knowledge,” like the following?

Global temperatures are the hottest ever recorded. Melting ice caps are raising seas to dangerous levels. Hurricanes, tornadoes, floods and droughts have never been more frequent or destructive. Planet Earth is at a tipping point because of carbon dioxide emissions. Fracking is poisoning our air, water and climate. 97 percent of scientists agree. A clean renewable energy future is just around the corner.

It’s as if a chain of command, carefully coordinated process or alliance of ideological compatriots was operating behind the scenes to propagate these fables. This time, conspiracy theorists have gotten it right.

A major player in this process and alliance is one that most citizens and even businessmen and politicians have never heard of. InsideClimate News (ICN) has been called “highly influential,” a “pioneer of nonprofit advocacy journalism,” the recipient of “prestigious awards” for “high-impact investigative stories” on important environmental issues.

The Washington Free Beacon, National Review and Energy in Depth offer detailed and far less charitable analyses. Less friendly observers, they note, call ICN a “mouthpiece” for extreme environmentalist groups, because it is run by and out of a deep-green public relations consultancy (Science First) and is funded almost exclusively by wealthy foundations that share its and the PR firm’s anti-fossil fuel, pro-renewable energy, Bigger Government agenda. ICN was founded by David Sasoon, a true believer in catastrophic manmade climate change who wants to do all he can “to usher in the clean energy economy.”

Even praise from its supporters underscores the dark side of this “influential” force in eco-journalism. Its approach is “advocacy,” not fairness, accuracy or balance. Its goal is to drive a monolithic, hard-line, environmentalist narrative and political agenda, with no suggestion that other perspectives can even exist.

Some of its awards come from an organization that has itself become politicized and too closely allied with Big Green views and organizations: the Society of Environmental Journalists. They increasingly operate too much as mutual admiration societies and support groups, say outside observers.

ICN and its Science First alter ego received their 2007 startup grant from the Rockefeller Brothers Fund, where Sasoon once worked as a consultant. They now derive the bulk of their funding from the RBF, NEO Philanthropy (aka, Public Interest Projects), Marlisa Foundation and Park Foundation. These and other sugar daddies are covered in a Senate Environment and Public Works Committee 350.org, and many other anti-coal, anti-drilling, anti-fracking, anti-Keystone pressure groups that together form the $10-billion-a-year US environmentalist industry.

The Associated Press has likewise become a reliable purveyor of manmade climate chaos stories. The Weather Channel and ICN teamed up in 2014 on a series of “investigative reports” that claimed hydraulic fracturing was causing serious environmental and human health problems in Texas.

The partners team up and coordinate to “have one group write on an issue, another quote them or link to them, and so on,” Media Research Center VP Dan Gainor explains. “It keeps going until they create this perception that there’s real concern over an issue, and it bubbles up to top liberal sites like Huffington Post, and from there into the traditional media,” which itself is too predisposed to the green narrative.

They make it look like widespread public concern and spontaneous grassroots action – when in reality it is loud but small Astroturf activism, orchestrated by the ICN brigade and the foundations behind it.

InsideClimate News now brags about its involvement in the extensive collusion among the leftist foundations, environmental pressure groups and state attorneys general that are devising, coordinating and advancing AG prosecutions of ExxonMobil and the Competitive Enterprise Institute for alleged “racketeering” and “fraud,” to hold them “legally accountable for climate change denial.”

The efforts “stretch back at least to 2012,” ICN notes, when a meeting was held in California to develop legal strategies. In late 2015, letters from several Democrat members of Congress called for investigating and prosecuting climate skeptics; the letters cited independent journalism “investigations by the Los Angeles Timesand InsideClimate News” to back up their request.

However, the intrepid investigators had conducted no investigation. They simply parroted and amplified “research” from a group of activist professors and students at the Columbia School of Journalism – without disclosing who had funded the CSJ studies.

Emails subpoenaed by the Energy & Environment Legal Institute later revealed that many of the same environmentalist groups and lawyers met again in January 2016 at a secret meeting in the Rockefeller Family Fund’s Manhattan offices. Yet another secret meeting was held in March 2016, between climate activists and state attorneys general – hours before the AGs announced that they were launching a series of RICO and other prosecutions of “climate skeptic” companies and think tanks.

This collusion among activists, foundations and attorneys general seeks to silence, bankrupt and defund organizations that challenge their catechism of climate cataclysm. These conspirators want to deprive us of our constitutional rights to speak out on the exaggerated and fabricated science, coordinated echo- chamber news stories, and pressure group-driven policies that impair our livelihoods, living standards, health, welfare and environmental quality. But we will not be intimidated or silenced.

That’s why Climate Crisis, Inc. already wants to silence and jail us. Just imagine how much they’ll be foaming at the mouth after millions go to ClimateHustle.com and buy tickets for the May 2 one-night-only extravaganza in hundreds of theaters across the United States.