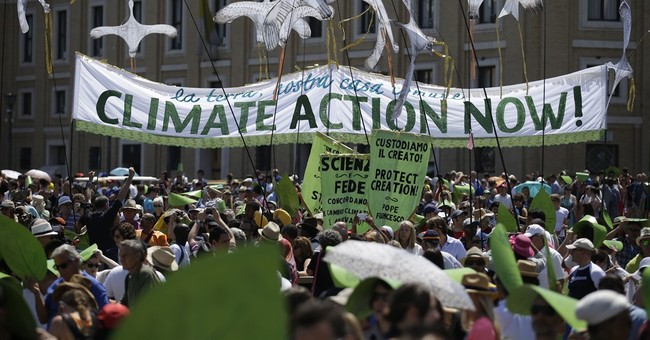 They haven’t employed the thumb screws, rack or auto-da-fe that churches and states once used to interrogate, silence and eliminate heretics and witches. However, global warming alarmists are well practiced in the modern equivalents, to protect their $1.5-trillion Climate Crisis Industry.

They see only what they want to see, and publicize only what they want us to see. They refuse to debate anyone who questions the nature, severity or reality of “manmade climate change dangers” that are the foundation of their demands that we slash fossil fuel use, lower our living standards, and accept global government planning of economies and massive climate “adaptation and reparation” payments.

They collude to hide and manipulate data, and employ computer models that that make the Little Ice Age disappear and global temperatures climb rapidly after 1950. They pressure editors to keep contrarian papers out of scientific journals, and present false claims that 97% of scientists agree that humans are causing dangerous climate change. They take billions from government agencies whose policies and regulations they promote. They blindly ignore the serious adverse effects that their policies have on blue-collar families and the world’s poor. Imbued with religious zeal, now they’re really ramping it up.

CARTOONS | AF Branco
View Cartoon
Led by Jagadish Shukla and four associates at his George Mason University-based Institute of Global Environment and Society, NCAR researcher Kevin Trenberth and 14 little-known “climate scientists” joined in signing an astounding letter that shows how far they will go to defend their turf and cause.

It asks President Obama, Attorney General Loretta Lynch and Obama science advisor John Holdren to investigate “organizations that have knowingly deceived the American people about the risks of climate change,” under the Racketeer Influenced and Corrupt Organizations (RICO) Act.

The letter claims the organizations’ actions “have been extensively documented,” and their “misdeeds” must be “stopped as soon as possible,” so that the world can “restabilize the Earth’s climate, before even more lasting damage is done” to human health, agriculture, biodiversity and the world’s poorest people.

The letter’s ironies, fallacies and falsehoods are almost too numerous to recount.

First, the attack on skeptic scientists was launched from a university named for George Mason, the patriot who wrote the original Virginia version of our Bill of Rights. They include freedom of speech, association, assembly, petitioning our government, and not having livelihoods and other property unreasonably seized. Sadly, it reflects the appalling state of “academic freedom” on too many campuses, which today celebrate every kind of diversity except diversity of opinion.

Second, this action is a blatant effort to (a) coerce, intimidate, slander and silence scientists and organizations that question human-caused climate dangers; (b) forcibly shut down skeptic research, funding, speech and publication; (c) destroy skeptics’ funding, businesses and livelihoods; (d) protect alarmist funding, standing and influence; and (e) bankrupt skeptics, who would have to spend personal fortunes responding to RICO charges and a Justice Department that has limitless resources at its disposal.

Third, the RICO-20 signed their names as members of university faculties and government agencies – suggesting that they represent their organizations and/or these organizations endorse their efforts. If that is the case, it represents another blatant double standard – and a tacit endorsement of the RICO agenda.

Will those institutions now demand that the RICO-20 remove any mention of their affiliations? Will they step forward to vigorously defend academic freedom, constitutional rights, and a scientific method that is severely undermined by this letter and other toxic battles over manmade climate cataclysm claims?

Fourth, RICO is used to prosecute underlying patterns or practices of criminal behavior. This letter may constitute just “acting out.” But whether it represents a pattern of alarmist parties illegally engaging in items (a) through (e) above by calling for criminal prosecution of climate skeptics – or whether opposing the ideological and political campaign for the anti-fossil fuel climate agenda constitutes the required “criminal enterprise” – remains unanswered.

In any event, the “misdeeds” alluded to in the RICO-20 letter are studies, reports and discussions that contradict alarmist allegations and what skeptics charge are exaggerations, fabrications and computer model failures that underlie those claims. This extensive library of challenges to the climate chaos thesis includes peer-reviewed NIPCC Climate Change Reconsidered reports, international climate skeptic conferences, and numerous articles, op-eds, interviews and briefings. They clearly undermine climate chaos theory, but they are protected free speech and reflect honest, replicable science.

This raises the fifth point, that “racketeering” means conducting a “racket.” The term is commonly understood to mean fraudulently offering to solve a problem, because the problem does not actually exist and/or the proffered “solution” would do nothing to solve the problem. Many would say this definition accurately describes the Climate Crisis Industry.

Climate change has been “real” throughout Earth and human history. Driven by powerful natural forces that we do not yet understand and certainly cannot control, it has ranged from gradual to sudden, from beneficial to harmful or even devastating. Contrary to alarmist assertions and computer models, there is still no observational evidence that what we are experiencing today: is different from what our ancestors confronted; is now driven by plant-fertilizing carbon dioxide instead of by the natural forces of yore; or could be prevented or controlled by ending fossil fuel use and dramatically lowering our living standards.

In fact, the notion that we can “restabilize” an unstable and frequently fluctuating planetary climate is ludicrous. So is any claim that carbon-based fuels are superfluous or readily dispensable – or that they are more damaging to human health, agriculture, biodiversity and the world’s poorest people than eliminating those fuels and relying on expensive, land-intensive, unreliable wind, solar and biofuel “substitutes.”

Equally doubtful is any suggestion that the IGES/COLA (Center for Ocean-Land-Atmosphere Studies) can understand or predict Earth’s ongoing climate variations by focusing on carbon dioxide and other greenhouse gases, and ignoring the solar, cosmic, oceanic and other natural forces that govern climate.

However, IGES/COLA derived 99.6% of its 2014 funding ($3.8 million in taxpayer money) from NASA, NOAA and the National Science Foundation, according to IRS Form 990 and other documents. Under the Obama Administration, those agencies have been almost completely co-opted by the alarmist climate agenda – and would likely terminate funding for any organization that expressed doubts about CO2, reduced its focus on greenhouse gases, or reengineered its climate models to reflect the full panoply of natural forces and thereby better assure accurate monsoon and climate forecasting.

Indeed, the latest Form 990 reveals, Dr. Shukla and his wife received salaries and other compensation totaling $499,145 in 2014 from their tax-exempt research organization. Dr. Shukla worked there only part-time, and his $333,048 compensation package “was presumably on top of his $250,866-per-year [George Mason] academic salary.” That totals $750,000 a year to the RICO-20 leader and his family “from public money for climate work & going after skeptics,” Professor Roger Pielke, Jr. wrote.

The ultimate irony would be an evenhanded investigation that exonerates the skeptic organizations that the RICO-20 want investigated – and results in charges against multiple corporations and organizations (and government agencies?) that engaged in collusion, data manipulation, junk modeling and other deceitful climate research practices that have been highlighted over the years.

The Internal Revenue Service’s targeting of conservative groups could well be what inspired the now fashionable idea of using the Justice Department to prosecute political opponents. The failure of the IRS and DOJ to penalize any of the perpetrators in those cases suggests that prosecution of alarmist fraud or racketeering is highly unlikely under the current administration.

However, the new 2017 administration could take a very different position. At the very least, a new Congress and Executive Branch could derail the climate alarm money train, initiate robust (and long overdue) debate on climate science and models, provide equal funding to skeptics, and end the alarmism. Potential sauce for the gander should make Dr. Shukla and fellow alarmists think twice about their tactic.

This RICO travesty shows how desperate alarmists have become. They are losing the climate science fight. Their models are increasingly contradicted by reality. Their ad hominem attacks will ultimately fail.

They also face major odds in Paris, where they may get a toothless treaty that makes empty promises to redistribute hundreds of billions of dollars from Formerly Rich Countries whose energy use and economic growth are hobbled – but places no binding emission targets on poor countries that will keep developing, burning coal and sending atmospheric carbon dioxide levels ever higher … with no effect on the climate.

Judge: Maxine Waters' Actions 'May Result in This Whole Trial Being Overturned'
Townhall
Judge in Derek Chauvin case says Rep. Maxine Waters may have given the defense something on appeal
Twitchy
CBS News Starts the Process of Doxxing Chauvin Trial Jurors
Redstate
Minneapolis Seeks to Ensure the City Will Burn by Crippling the Police Response
PJ Media