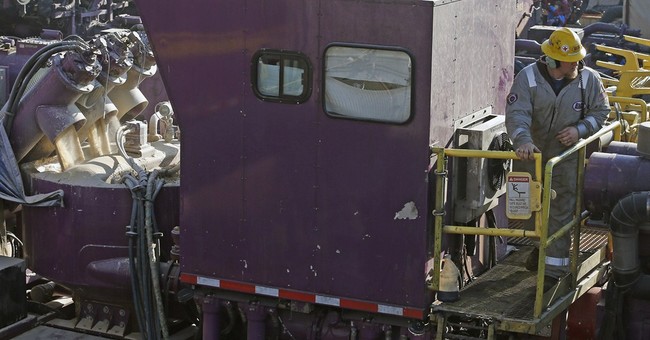 Several Hollywood elites were recently caught red-handed on videotape, agreeing to take money from a Middle Eastern oil sheikh for another anti-fracking movie. Their actions were shameful, but they felt no shame – only anger at the folks who caught them in the act. Indeed, the ironies are matched only by their hypocrisy and disdainful disregard for the consequences of their anti-fracking fervor.

The video records a conversation involving a producer, two actors – and someone they thought represented an oil oligarch. The Hollywood glitterati made it clear that they were willing to take Middle East oil cash for a film intended to help block drilling, hydraulic fracturing, energy production, job creation, revenue generation and our nation’s economic rejuvenation.

The three are known for their environmental fervor – and their apparent belief that it’s okay to drill for oil in Arab countries, but against all reason to drill in the United States. It’s also okay for them to enjoy lavish lifestyles, as long as California imports its oil and electricity, to avoid drilling in the Golden State.

Had this been a sincere movie offer, it would have brought a sweet deal for an Arab oilman protecting his oil sales from US competition, by helping Hollywood stars make a film aligned with their disconnected-from-reality views on environmental balance. But it was a hoax perpetrated by James O’Keefe’s Project Veritas, which catches glamorous stars and other people just being themselves.

The meeting occurred in March at the Beverly Hills Hotel recently made notorious for being owned by the Sultan of Brunei, who favors sharia laws that can often be brutal. The tape reveals how far some Hollywood environmentalists will go to push their narrow agenda and work against the nation’s interests. It also recalls Matt Damon’s anti-fracking film, Promised Land, funded by the United Arab Emirates, and Josh Fox’s fabrication-filled film that was eviscerated by McAleer and McElhinney’s FrackNation.

In discussing the movie proposal, Sundance-award-winning environmental film producer Josh Tickell tells “Muhammad” the fake sheik not to divulge that Middle Eastern oil loot is supporting the project, because that would make the movie “a nonstarter.” Academy Award-nominated actress Mariel Hemingway chimes in, saying the funding information should be shared “only at this table.”

Ed Begley Jr., who sits on the Oscar Board of Governors and is well-known for his staunch support for all things environmental, adds a big dose of cynicism. “Washington and Hollywood are a lot alike: all illusions, special effects, smoke and mirrors,” he says. This is no different, seems to be his message.

After the tape was made public, Tickell, Hemingway and Begley tried to explain away their behavior and foist the blame on O’Keefe and Veritas. They had agreed to meet with Muhammad only to help a friend get a movie deal. They had been set up. She should have conducted better “due diligence” on “Muhammad,” Hemingway told Fox News. “I was made to look foolish and to seem in favor of additional dependence on foreign oil,” Begley lamented. Falsely claiming that O’Keefe had referred to environmentalists as “Nazis,” Tickell attempted to tar the messenger: Veritas had tried to “equate the extermination of European Jews with efforts to oppose fracking,” he dissembled.

In other words, “I didn’t do nuthin’ wrong. Duh cops entrapped me into doin’ it.”

Begley’s website extols his stardom, lifestyle and environmental dogma. The actor is known for riding his bicycle to events, lives in a “sustainable” wind and solar-powered house, drives a subsidized electric car, and has won awards for supporting environmental causes. Meanwhile, he depends heavily on fossil fuels for his employment in energy-guzzling Hollywood and nearly every benefit he enjoys outside his home: restaurants, hospitals, air travel, the internet, his website. That’s nice for him.

But what about the rest of America, where ordinary people must support their families on average wages, drive affordable gasoline-fueled cars, and use hydrocarbons to heat their homes and cook their food? “As environmental issues become more pressing,” Begley challenges them to “take action.” By that, he apparently means kill the jobs, economy and fossil fuels that enhance and safeguard our lives.

Never mind that petroleum has been the one bright spot in the US economic recovery, putting millions of Americans back to work and generating hundreds of billions of dollars for investment portfolios and local, state and federal treasuries. In fact, according to IHS Global Insights, unconventional oil and gas production – in conjunction with chemicals manufacturing and other hydrocarbon feed stock and energy-dependent industries – have contributed more than 2.5% per year to America’s GDP. They’ve created 2.5 million new direct and indirect jobs, with the prospect of an additional 3.9 million jobs by 2025!

With economic growth averaging a pitiful 2.2% annually over the past four years, that means the nation’s growth would have been in negative territory all those years, were it not for fracking – instead of only during the first quarter of 2014 (when it contracted by 1%). At the state level, the University of Colorado’s Leeds School of Business says a statewide fracking ban would kill 68,000 jobs and cost the state’s economy $8 billion over the ensuing five years.

Never mind that only computer models and hopelessly politicized pseudo-science have been able to find the dangerous manmade global warming and climate disruption that Begley, Hemingway, Tickell and other Big Green activists use to justify anti-fracking and anti-coal policies.

And what about impoverished Third World countries? Begley is dismissive of their needs. In 2002, he told me and other environmental journalists that he opposes building power plants in Africa, saying “It’s much cheaper for everybody in Africa to have electricity where they need it – solar panels on their huts.”

This is truly the super-rich 0.01% versus the 99.99% of merely well-off, middle class, poor and minority Americans, and the truly destitute people struggling daily just to survive in developing countries, amid malnutrition, diseases and energy deprivation unheard of in the USA, Canada or Europe.

Meantime, don’t forget the ironies in all of this. Were it not for fracking, US carbon dioxide emissions would not have declined 11% since 2005. Largely because of climate change, renewable energy and anti-fracking hysteria, European countries are rapidly expanding their coal-based electricity generation (and greenhouse gas emissions), while asking the USA to sell them natural gas. Contrary to recent stories in “mainstream” media outlets like Reuters, the UK Guardian and USA Today, China has no intention of putting a “hard cap” on its CO2 emissions. Nor do India and other emerging markets. They need that energy to modernize their economies, lift billions out of poverty, and avoid riots and revolutions.

Meanwhile, back in the States, it is the Obama, Hollywood and Big Green attitudes about fracking, coal and average working-class families that have put a number of Senate Democrats on the endangered list. As to their voting base, the same eco-centric, high-tax, boundless regulation policies have helped ensure that over 40% of heavily indebted new college graduates are unemployed or working in food services, retail and other jobs that don’t even require college degrees. Minorities are also disproportionately hurt.

Begley and his comrades’ attacks on O’Keefe do not change these facts. But for them, poor people’s health, lives and access to affordable energy must be guided and limited by “sustainability” and anti-hydrocarbon ideologies. As Green Planet production company chief Josh Tickell said in the video, “It’s money, so in that sense we have no moral issue.”

These Hollywood elites are not innocents caught in a web. They are zealots who got their just desserts. In their warped way of thinking, the end – saving the environment from imagined dangers, while padding Hollywood pockets – justifies the means.

Sure, they got snookered. But anyone who watches the video can see they were complicit in the deception and sting. May their unintended honesty be a lesson for all voters who might be tempted to continue supporting Big Green ideologies.