Lies My President Told Me 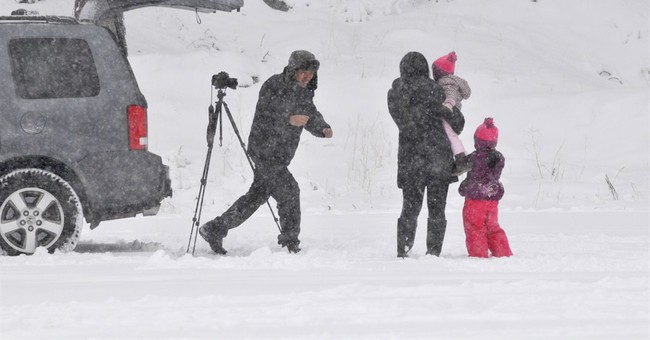 It was just a couple of renegade IRS agents in Cincinnati. Benghazi was a spontaneous protest that got out of control in direct response to an inflammatory video posted on the internet. During September 2012, our rebounding economy created an astonishing 873,000 jobs. And on and on.

If we have learned anything about President Obama and his administration, it is that they are compulsive, practiced prevaricators – determined to advance their agenda of “fundamentally transforming” America and imposing greater government control over our lives, living standards and pursuit of happiness. When caught, they dissemble, say they were “not informed directly,” issue false apologies, or fire back with “What difference, at this point, does it make anyway?!?”

Keep all this in mind when the President and other Washington politicos bring up “dangerous manmade global warming,” insist that we slash fossil fuel use, and tell us we need to give poor countries billions of dollars a year to compensate them for “losses and damages” they incurred due to warming we caused.

When they claim “97% of scientists say the planet is warming and human activity is contributing to it,” remember: This is based on 75 of 77 “climate scientists” who were selected from a 2010 survey (that went to 10,257 scientists). 700 climate scientists, 31,000 American scientists and 48% of US meteorologists say there is no evidence that humans are causing dangerous warming or climate change.

Moreover, “contributing to” is meaningless. Is it a 1, 5, 20 or 90% contribution? Is it local or global? Do scientists know enough to separate human factors from the numerous, powerful, interrelated solar, cosmic, oceanic, terrestrial and other forces that have repeatedly caused minor to major climate changes, climate cycles and weather events throughout human and geologic history? At this point, they do not.

When the President says “carbon pollution in our atmosphere has increased dramatically,” remember: It’s not “carbon” (soot) – it’s carbon dioxide. It’s not “pollution” – it’s the plant-fertilizing gas that makes all life on Earth possible. Increased “dramatically” means rising from 330 ppm (0.030% of the atmosphere) in 1975, when scientists were concerned about global cooling, to about 400 ppm (0.040%) today.

(Oxygen represents 21% of atmospheric gases (210,000 ppm). Argon is 0.93% (9,300 ppm). About 90% of the “greenhouse effect” is from water vapor. And roughly 95% of the annual addition to atmospheric carbon dioxide levels is from volcanoes, subsea vents and other natural sources.)

Over the past 16 years, while CO2 levels continued to increase “dramatically,” average planetary temperatures did not budge. The eight years since a Category 3 hurricane made landfall in the United States is the longest such period since 1900 or even the 1860s. Even with the recent Midwestern and East Coast twisters, US tornado frequency remains close to a record low. Is that due to CO2 emissions?

There is one point on which the President is correct. In 2008 he said “This was the moment when the rise of the oceans began to slow.” And indeed, they are now rising at a mere seven inches per century.

All of this should fascinate the scholar and climate realist that lurks inside each of us. But what should concern us is the pernicious effects that the constant barrage of “manmade climate change” hype and headlines is having on public policies, taxpayer and consumer expenditures, and our daily lives.

Like threads in a tapestry, “dangerous manmade climate change” is intertwined with anti-hydrocarbon, imminent resource depletion, renewable energy, sustainable development, and wealth redistribution theses and ideologies. They are used to concoct and justify energy and economic policies, ranging from delays and bans on oil and gas leasing and drilling, to the war on coal mining and use, and diehard opposition to hydraulic fracturing and the Keystone XL pipeline.

They promote spending $22 billion just in federal money during FY-2014 on climate change studies; costly solar projects of every description; wind turbines that blight scenic vistas and slaughter millions of birds and bats annually, while wind energy developers are exempted from endangered species and other environmental laws that apply to all other industries; and ethanol programs that require millions of acres of farmland and vast quantities of water, fertilizer, pesticides and fossil fuel energy to produce a gasoline additive that reduces mileage, harms engines, drives up food prices … and increases CO2 emissions.

The policies, laws and regulations affect everything we make, grow, ship, eat, drive and do – 100% of our energy based economy, not just one-sixth under ObamaCare – and put legislators, bureaucrats, activists and courts in ever-increasing control over our lives, livelihoods, liberties, living standards and life spans.

Even worse, it’s all for nothing – even if carbon dioxide plays a bigger role in climate change than many scientists believe it does. Germany is relying increasingly on coal for power generation. Australia has junked its cap-tax-and-trade program. Britain is reexamining its commitment to CO2 reduction. China and India are building new coal-fueled power plants every week, and neither they nor any of the real “developing countries” are required to commit to “binding targets” for lower carbon dioxide emissions.

Under agreements signed at the just-concluded UN climate conference in Warsaw, 130 developing nations must merely make “contributions” toward lower emissions, and only when they are “ready to do so.”

But then international climate programs were never really about preventing climate change. As IPCC official Ottmar Edenhofer has admitted, they are about “how we redistribute the world’s wealth.” First, tens of billions continue flowing annually to IPCC scientists and bureaucrats and renewable energy programs. Then we start talking about real money.

Now that the IPCC, President Obama and hordes of other climate alarmists have convinced so many people that climate change is “real,” it’s “happening now,” humans are “contributing to” myriad disasters on an “unprecedented” scale – the Group of 130 expects the FRCs (Formerly Rich Countries) to pay up.

China, India, island nations and poor countries demand “compensation,” “adaptation” and “mitigation” money, to pay for “losses and damages” from rising seas and more frequent, more intense storms and droughts – which they say are happening already, and which they blame on industrialized nations that helped raise CO2 levels from 280 ppm at the dawn of the Industrial Revolution to 400 ppm today.

They want $50 billion immediately, followed by $100 billion to $400 billion per year, plus free transfers of our best energy, pollution control and industrial technologies. It’s too late to prevent, mitigate or adapt to climate change, they say. You “rich countries” need to start paying for the damage you are causing.

20% of the EU budget will now go toward CO2 emission reductions and helping poor countries adapt to climate change: €180 billion ($245 billion) by 2020. What the United States will have to pay in “compensation” and under ClimateCare schemes being hatched at EPA, DOI and Energy headquarters is yet to be determined. But the payments will be substantial, even crippling.

We are caught in a climate trap of our own (bureaucrats and politicians) making. How will we get out?