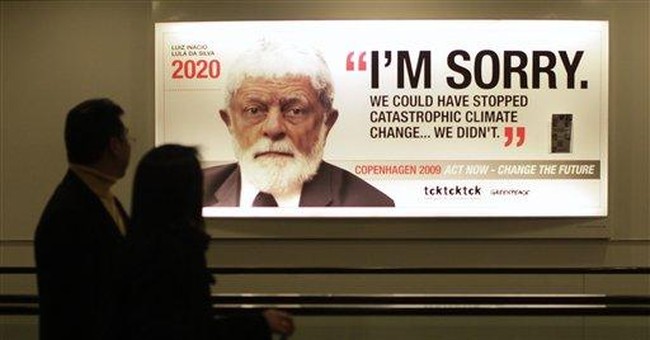 Aside from ideologues, hydrocarbon haters, Gaia worshipers, profiteers and power-grabbing politicians, most of the sentient world now realizes that the hysteria over global warming disasters is based on dubious to fraudulent temperature data, analyses, models, reports and peer reviews.

Climate Research Unit emails, HARRY_READ_ME.txt computer memos, and blatant tampering with Australian, Russian, UK and US temperature data make the scandal impossible to ignore or explain away. They certainly helped Copenhagen descend into an expensive, carbon-emitting gabfest, and cause China and India to reject any deal that would force them to curtail their energy generation, economic growth and poverty reduction programs.

Senator Barbara Boxer is an exception. Not only does she ignore the obvious. She is doing her best to divert attention from the scandal, circle the alarmist wagons, cover up the fraud, obstruct justice – and ram through yet another legislative power grab.

“This isn’t Climategate,” the California Democrat insists. “It’s email theft gate.” The problem isn’t the fraud; it’s that a hacker or whistleblower revealed the fraud.

We, the taxpayers, We the people – paid for this “research.” We paid billions of dollars for it – and providing the data, computer codes and analytical methods is a condition of the employment and research grants for these scientists. The work belongs to us. We own it.

We the People, our elected representatives and our climate realist scientists have a right to examine this supposed evidence of planetary disaster, to ensure that it’s driven by science, and not ideology. That it’s complete, accurate – and honest. That it backs up the alarmist scientists’ call for draconian, life-altering restrictions on energy use. That the CRU Cabal did not alter, lose, ignore, toss or destroy “inconvenient” data and evidence that might get in the way of their agendas and predetermined results.

Not only were we stonewalled for years, while these UK and US scientists refused to divulge their data, computer codes and methodologies. Not only did the scientists who wrote these emails and did this bogus research refuse to let taxpayers, other scientists and even members of Congress (and Parliament) see their raw data and analyses. Not only did they prevent debate and replace peer review with a perverted system that allowed only a small network of like-minded colleagues to examine – and applaud – their work. They also excluded, denounced and vilified anyone who asked hard questions or challenged their actions.

In short, we were robbed! They took our money, and defrauded us.

Even worse, the Taxpayer Robbery Gate scientists are working hand-in-glove to pressure the United States, Great Britain and world into spending trillions of dollars fighting “catastrophic manmade climate change” … slashing our energy use, living standards and employment base … enacting unaccountable global government … redistributing wealth and technology … restricting our liberties and civil rights … and keeping millions of families deprived of energy and in permanent destitution.

This is the same California Senator who berated an Air Force general for calling her Ma’am. Who treated scientist, physician and author Michael Crichton like a child molester, for daring to disagree with her on global warming and suggest that double-blind climate studies would guard against errors and fraud. Who displays an un-American intolerance for any witnesses before her committee who question her views.

The Boxer-White House effort makes the Watergate cover-up and obstruction of justice look like a juvenile offense. It’s paving the way for cap-tax-and-trade laws that would nationalize the entire US economy – by the same divisive, dictatorial elements that are nationalizing our banking and healthcare systems. They understand, even if the general populace still does not, that by controlling carbon they will control our lives. And if they need fraudulent science and Nixon-era tactics to achieve their goal, so be it.

Just imagine the Boxer, White House and media outcry and denunciations if these emails and fraudulent actions had involved oil companies and climate disaster “deniers.” But of course, if Boxer & Co. didn’t have double standards, they wouldn’t have any standards

“We’re honest. We have nothing to hide,” the accused scientists keep saying. That’s wonderful. We’re glad to hear that.

But then why don’t they just come clean. Stop hiding everything. Open all their emails. Cooperate with investigators. Honor FOIA requests. Share their data and computer codes. Stop attacking scientists who disagree with them. Put all climate studies, for and against manmade global warming disaster claims, in professional journals – subject to real peer review. Debate their critics.

In short, help clean up the mess they created. Or suffer the consequences.

This bogus science and cover-up operation is behind every US, EU and UN proposal to restrict and control our energy, economy, living standards and most fundamental liberties – in the name of preventing alleged global warming disasters.

We need to get to the bottom of this mess. We need a full and complete investigation, by an independent, incorruptible team of knowledgeable scientists, modelers, lawyers and statisticians. We need to start over on the global warming science and Intergovernmental Panel on Climate Change – with honest scientists who do everything in the open.

We need to bring honesty, transparency, robust debate and accountability back to the legislative and public policy process.