Patrick Michaels
|
Posted: Aug 17, 2019 12:01 AM
Share   Tweet
The opinions expressed by columnists are their own and do not necessarily represent the views of Townhall.com. 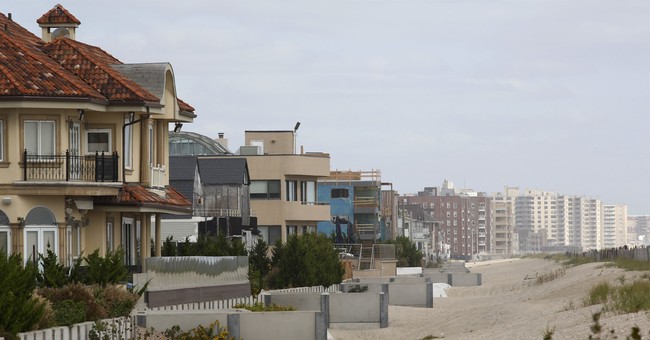 Should taxpayers subsidize my new, gigantic beachfront house?  Few people realize this is going on, even though mostly everyone (excepting beach homeowners, real estate and rental agents, tourism promoters etc…) would agree that this is folly.

Anyone trucking the family on serial pilgrimages to the Atlantic and the Gulf Coast can see that beach houses are getting bigger and bigger, especially after hurricanes strong enough to cause major (and sometimes complete) destruction.

This was documented in the technical journal Nature Sustainability late last year—a mere two months after Category 4 Hurricane Michael (ultimately reclassified as a Cat 5) mowed down pretty much every nearshore house in Mexico Beach, Florida.  Two of the authors popularized their work as this hurricane season spun up in July in the Houston Chronicle.

As beachfront towns go, Mexico Beach was a bit on the shabby side, with mostly modestly sized homes.  That won’t be the case after everything is built back.

As noted by Eli Lazarus and Evan Goldstein in the Chronicle,

"…[T]hese homes [are] built back bigger in places known to be vulnerable to coastal hazards. Recognizing the emerging pattern of these risky investments is an important step toward understanding why people are making them in the first place. As critics point out, federal disaster aid and subsidized flood insurance are funded with taxpayer dollars, so Americans effectively subsidize development in hazardous areas."

They looked at before-and-after satellite imagery for five significant hurricanes which clearly demonstrated that pre-storm beachfront houses have a way of being replaced by beachfront monstrosities.

It’s a matter of economics, climate and politics working hand-in-glove, and we the taxpayers get the bill.

It all goes back to the National Flood Insurance Program (NFIP), started in 1968 and is soon to be re-authorized by Congress for another five years.

What homeowners pay, year in and year out, is simply not enough to cover NFIP’s payouts when a huge storm hits.  For example, 2005 hurricane Katrina put the Program a cool 25 billion in the hole.  Because the homeowners are nonetheless fully compensated, NFIP effectively is a subsidy, especially to those who live in the most dangerous (and expensive) places, i.e. on the beach.

In reality, very few people “live” in beachfront houses along the hurricane-prone Atlantic and Gulf Coasts.  Many of these homes are rented out. And the bigger they are, the higher the rent.  In high season this summer, there were big beachfront homes going for over $40,000 per week on Pine Island, North Carolina, on the Outer Banks.

After a storm hits, what a fully compensated owner gets is a large down payment on a new and larger home, whose rental revenue will cover the mortgage and then some.  The bigger the home, the more income it generates, and the higher its replacement cost when the next big storm mows it down.

In the real world, insurers charge larger premiums for higher-risk people and property, and often simply refuse to offer coverage at all in many cases.

NFIP is different.  It can’t deny coverage in what it calls “special flood hazard areas”, the most prone properties of all.  These include homes in flood plains, or behind breachable levees, and beachfront and near-beach properties on almost all the Atlantic and Gulf coasts.

William O. Jenkins, then-Director of the office of Homeland Security and Justice Issues in the U.S. Government Accountability Office, testified in 2004  to the Senate Subcommittee on Economic Policy of the Senate Committee on Banking, Housing, and Urban Affairs that “repetitive and severe repetitive loss properties comprised only 1 percent of all NFIP insured properties, but accounted for 38 percent of all claims paid by the program.”

And nowadays each of those repetitive losses tend to be replaced by a bigger house, imposing a greater cost to taxpayers when the next storm hits.

How can this possibly be justified?  Bet that the vast majority of us, almost all of whom live away from the beach, can all agree on the folly of subsidizing the insurance of larger and larger beachfront properties that only incentivizes owners to rebuild bigger and bigger, ultimately costing us more and more.

This is a cycle that needs to stop.  NFIB might start by increasing premiums to cover our costs.