Pat Buchanan
|
Posted: Jun 30, 2017 12:01 AM
Share   Tweet
The opinions expressed by columnists are their own and do not necessarily represent the views of Townhall.com. 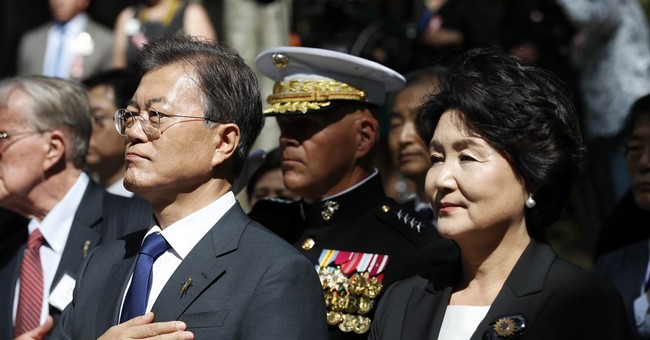 "The North Korean regime is causing tremendous problems and is something that has to be dealt with, and probably dealt with rapidly."

So President Trump told reporters in the Rose Garden this week.

But how this is to be done "rapidly" is not so easy to see.

North Korea has just returned to us Otto Warmbier, a student sentenced to 15 years hard labor for stealing a propaganda poster. Otto came home comatose, and died within days.

Trump's conundrum: How to keep such a regime from acquiring an ICBM with a nuclear warhead, which Kim Jong Un is determined to do.

Having seen us attack Iraq and Libya, which had no nukes, Kim believes that only nuclear weapons that can hit America can deter America. He appears willing to risk war to achieve his goal.

First, the decapitation of the Kim dynasty. But the U.S. has been unable to accomplish regime change for the 64 years following the Korean War. And killing Kim could ignite a war.

Then there is a U.S. pre-emptive strike on North Korea's nuclear sites and missile arsenals. But this would surely mean a war in which Americans on the DMZ would be among the first to die, as thousands of North Korean artillery and mortar tubes fired into the suburbs and city of Seoul, which is as close as Dulles Airport is to the White House.

Asked by Congressman Tim Ryan why we don't launch a war to end this threat, Defense Secretary James Mattis replied that, while we might "win ... at great cost," such a war would "involve the massive shelling of an ally's capital ... one of the most densely packed cities on earth."

Seoul has a metro-area population of 25 million.

We are thus approaching a point where we accept North Korea having a nuclear weapon that can reach Seattle, or we attack its strategic arsenal and bring on a war in which millions could die.

The only nation that could impose sufficient hardships on North Korea to imperil the regime is China. But China refuses to impose the Draconian sanctions that might destabilize the regime, and might bring Korean refugees flooding into China. And Beijing has no desire to see Kim fall and Korea united under a regime aligned with the United States.

What FDR said of one Caribbean dictator, the Chinese are probably saying of Kim Jong Un, "He may be an SOB, but he's our SOB."

Early in his presidency, Trump gave the franchise for dealing with the North Korean threat to Beijing. But his friend Xi Jinping has either failed Trump or declined to deliver.

As for President Moon, he wants to negotiate, to engage the North economically, to invite its athletes to join South Koreans on joint teams for the Winter Olympics in 2018. Moreover, Moon is said to be willing to cut back on joint military exercises with the U.S. and regards the THAAD missile defense we introduced into South Korea as a negotiable item.

China, whose missile launches can be detected by THAAD radar, wants it removed and has so informed South Korea.

Where does this leave us?

We are committed to go to war to defend the South and have 28,000 troops there. But South Korea wants to negotiate with North Korea and is prepared to make concessions to buy peace.

As the nation that would suffer most in any second Korean War, South Korea has the sovereign right to play the hand. But what Seoul considers best for South Korea is not necessarily best for us.

The U.S. would give Seoul notice that we will, by a date certain, be dissolving our mutual security treaty and restoring our full freedom to decide whether or not to fight in a new Korean War. Given the present risk of war, possibly involving nuclear weapons, it is absurd that we should be obligated to fight what Mattis says would be a "catastrophic" war, because of a treaty negotiated six decades ago by Eisenhower and Dulles.

"The commonest error in politics," Lord Salisbury reminded us, "is sticking to the carcass of dead policies."

But we should also tell South Korea that if she desires a nuclear deterrent against an attack by the North, she should build it. Americans should not risk a nuclear war, 8,000 miles away, to defend a South Korea that has 40 times the economy of the North and twice the population.

No vital U.S. interest requires us, in perpetuity, to be willing to go to war to defend South Korea, especially if that war entails the risk of a nuclear attack on U.S. troops or the American homeland.

If the United States did not have a mutual security pact that obligates us to defend South Korea against a nuclear-armed North, would President Trump be seeking to negotiate such a treaty?

The question answers itself.