Pat Buchanan
|
Posted: Nov 26, 2016 12:01 AM
Share   Tweet
The opinions expressed by columnists are their own and do not necessarily represent the views of Townhall.com. 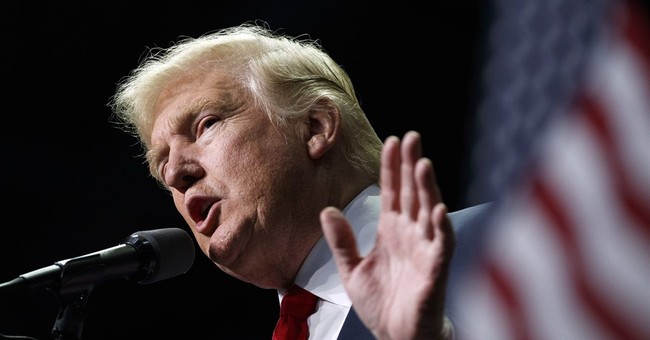 Donald Trump's election triumph is among the more astonishing in history.

Yet if he wishes to become the father of a new "America First" majority party, he must make good on his solemn promise:

To end the trade deficits that have bled our country of scores of thousands of factories, and to create millions of manufacturing jobs in the USA.

Fail here, and those slim majorities in Michigan, Pennsylvania and Wisconsin disappear.

The president-elect takes credit for jawboning William Clay Ford to keep his Lincoln plant in Louisville. He is now jawboning Carrier air conditioning to stay in Indiana and not move to Mexico.

Good for him. But these are baby steps toward ending the $800 billion trade deficits in goods America runs annually, or bringing back factories and creating millions of new manufacturing jobs in the USA.

The NAFTA Republicans tell us the plants and jobs are never coming back, that we live in a globalized world, that production will now be done where it can be done cheapest -- in Mexico, China, Asia.

Yet, on Nov. 8, Americans rejected this defeatism rooted in the tracts of 19th-century British scribblers and the ideology of 20th-century globalists like Woodrow Wilson and FDR.

America responded to Trump's call for a new nationalism rooted in the economic principles and patriotism of Hamilton and the men of Mount Rushmore: Washington, Lincoln, Jefferson and Theodore Roosevelt.

The president-elect has declared the TPP dead, and says he and his negotiators will walk away rather than accept another NAFTA.

Again, good, but again, not good enough, not nearly.

The New International Economic Order imposed upon us for decades has to be overthrown.

For the root cause of the trade deficits bleeding us lies in U.S. tax laws and trade policies that punish companies that stay in America and reward companies that move production overseas.

Executives move plants to Mexico, Asia and China for the same reason U.S. industrialists moved plants from the Frost Belt to the Sun Belt. Given the lower wages and lighter regulations, they can produce more cheaply there.

In dealing with advanced economies like Japan, Germany, and the EU, another critical factor is at work against us.

Since the Kennedy Round of trade negotiations, 50 years ago, international trade deals have reduced tariffs to insignificance.

But our trade rivals have replaced the tariffs with value-added taxes on imports from the USA. Even to belong to the EU, a country must have a VAT of at least 15 percent.

As Kevin Kearns of the U.S. Business and Industry Council writes, Europeans have replaced tariffs on U.S. goods with a VAT on U.S. goods, while rebating the VAT on Europe's exports to us.

Some 160 countries impose VAT taxes. Along with currency manipulation, this is how European and Asian protectionists stick it to the Americans, whose armed forces have defended them for 60 years.

We lose at trade negotiations, even before we sit down at the table, because our adversaries declare their VAT nonnegotiable. And we accept it.

Trump has to persuade Congress to deal him and our trade negotiators our own high cards, without our having to go to the WTO and asking, "Mother, may I?"

Like this writer, Kearns argues for an 18 percent VAT on all goods and services entering the United States. All tax revenue raised by the VAT -- hundreds of billions -- should be used to reduce U.S. taxes, beginning by ending the income tax on small business and reducing to the lowest rate in the advanced world the U.S. corporate income tax.

The price of foreign-made goods in U.S. stores would rise, giving a competitive advantage to goods made in America. And with a border VAT of 18 percent, every U.S. corporate executive would have to consider the higher cost of leaving the United States to produce abroad.

Every foreign manufacturer, to maintain free access to the U.S. market of $17 trillion, greatest on earth, would have to consider shifting production -- factories, technology, jobs -- to the USA.

Inversions -- U.S. companies seeking lower tax rates by moving to places like Ireland -- would end. Foreign companies and banks would be clamoring to get into the United States.

Most important, by having Americans buy more from each other, and rely more on each other for the necessities of life, U.S. trade and tax policies would work to create a greater interdependence among us, rather than pull us apart as they do today.

Why not write new tax and trade laws that bring us together, recreating the one nation and people we once were -- and can be again?