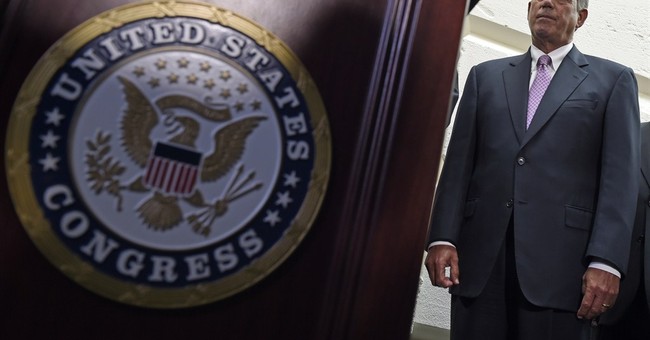 If the sadists of ISIS are seeking -- with their mass executions, child rapes, immolations, and beheadings of Christians -- to stampede us into a new war in the Middle East, they are succeeding.

Repeatedly snapping the blood-red cape of terrorist atrocities in our faces has the Yankee bull snorting, pawing the ground, ready to charge again.

"Nearly three-quarters of Republicans now favor sending ground troops into combat against the Islamic State," says a CBS News poll. The poll was cited in a New York Times story about how the voice of the hawk is ascendant again in the GOP.

In April or May 2015, said a Pentagon briefer last week, the Iraqi Army will march north to recapture Mosul from the Islamic State.

On to Mosul! On to Raqqa!

Yet, who, exactly, will be taking Mosul?

According to Rowan Scarborough of The Washington Times, the U.S. general who trained the Iraqi army says Mosul is a mined, booby-trapped city, infested with thousands of suicide fighters.

Any Iraqi army attack this spring would be "doomed."

Yet taking Mosul is only the beginning. Scores of thousands of troops will be needed to defeat and destroy ISIS in Syria.

And eradicating ISIS is but the first of the wars Republicans have in mind. This coming week, at the invitation of Speaker John Boehner, Bibi Netanyahu will address a joint session of Congress.

His message: Obama and John Kerry are bringing back a rotten deal that will ensure Iran acquires nuclear weapons and becomes an existential threat to Israel. Congress must repudiate Obama's deal, impose new sanctions on Iran and terminate the appeasement talks.

Should Bibi and his Republican allies succeed in closing the ramp to a diplomatic solution, we will be on the road to war.

Which is where Bibi wants us.

To him, Iran is the Nazi Germany of the 21st century, hell-bent on a new Holocaust. A U.S. war that does to the Ayatollah's Iran what a U.S. war did to Hitler's Germany would put Bibi in the history books as the Israeli Churchill.

But if Republicans scuttle the Iranian negotiations by voting new sanctions, Iran will take back the concessions it has made, and we are indeed headed for war. Which is where Sen. Lindsey Graham, too, now toying with a presidential bid, wants us to be.

In 2010, Sen. Graham declared: "Instead of a surgical strike on [Iran's] nuclear infrastructure ... we're to the point now that you have to really neuter the regime's ability to wage war against us and our allies. ... [We must] destroy the ability of the regime to strike back."

If Congress scuttles the nuclear talks, look for Congress to next write an authorization for the use of military force -- on Iran.

Today, the entire Shiite Crescent -- Iran, Iraq, Bashar Assad's Syria, Hezbollah -- is fighting ISIS. All these Shiites are de facto allies in any war against ISIS. But should we attack Iran, they will become enemies.

And what would war with Iran mean for U.S. interests?

With its anti-ship missiles and hundreds of missile boats, Iran could imperil our fleet in the Persian Gulf and Arabian Sea. The Gulf could be closed to commercial shipping by a sinking or two.

Hezbollah could go after the U.S. embassy in Beirut. The Green Zone in Baghdad could come under attack by Shiite militia loyal to Iran.

It surely would if America listened to those Republicans who now say we must bring down Assad to convince Saudi Arabia and the Gulf Arabs to join the fight against ISIS.

By clashing with Iran, we would make enemies of Damascus and Baghdad and the Shiite militias in Iraq and Beirut battling ISIS today -- in the hope that, tomorrow, the conscientious objectors of the Sunni world -- Turks, Saudis, Gulf Arabs -- might come and fight beside us.

Listen for long to GOP foreign policy voices, and you can hear calls for war on ISIS, al-Qaida, Boko Haram, the Houthi rebels, the Assad regime, the Islamic Republic of Iran, to name but a few.

Are we to fight them all? How many U.S. troops will be needed? How long will all these wars take? What will the Middle East look like after we crush them all? Who will fill the vacuum if we go? Or must we stay forever?

Nor does this exhaust the GOP war menu.

Enraged by Vladimir Putin's defiance, Republicans are calling for U.S. weapons, trainers, even troops, to be sent to Ukraine and Moldova.

Says John Bolton, himself looking at a presidential run, "Most of the Republican candidates or prospective candidates are heading in the right direction; there's one who's headed in the wrong direction."

That would be Rand Paul, who prefers "Arab boots on the ground."