Ukraine's Crisis, Not Ours 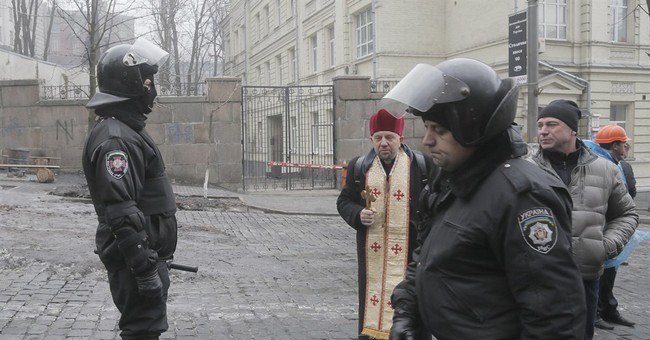 Richard Engel of NBC, reporting from Maidan Square in Kiev, described what he witnessed as the Feb. 19 truce collapsed.

Police began to back away from their positions in the square, said Engel. And the protesters attacked. Gunfire was exchanged and the death toll, believed to be in the dozens, is not known.

In short, the reality in Kiev is more complex than the black-and-white cartoon of Vladimir Putin vs. the freedom fighters drawn by our resident Russophobic elite. Perspective is in order.

First, though portrayed as a tyrannical thug, Viktor Yanukovych won the presidency of Ukraine in 2010 in what international observers called a free and fair election. He may not be Marcus Aurelius, but his remains the legitimate government.

Second, high among the reasons Yanukovych chose Russia's offer to join its custom union over the EU is that Putin put a better deal on the table.

Moscow put up $15 billion in loans and cut-rate oil and gas. The EU offered some piddling loans and credits, plus a demand for reforms in the Ukrainian economy monitored by the IMF, but no commitment to full membership in the EU.

As for the "protesters" who came to Maidan Square in November, not all came simply to protest. Many set up tents and shacks, threw up barricades, seized government buildings, burned the headquarters of the ruling party, battled police and demanded the overthrow of the regime.

How many Western countries would permit a planned putsch in their capital city?

Still, after weeks of protest, Yanukovych offered to negotiate.

He fired his prime minister and tendered the post to the leader of the opposition Arseniy Yatsenyuk. He offered to make Vitali Klitschko, the ex-heavyweight champion and the head of another opposition party, the deputy prime minister. His offer was rejected.

Yanukovych then had parliament repeal the tough laws against protests he had had enacted and delivered a full amnesty to those arrested during the months of occupation. In effect, Yanukovych offered peace and a coalition government with his opponents until new presidential elections new year.

Why was this unacceptable? Because the protesters want Yanukovych out, new elections now, and Ukraine reoriented toward Europe.

While the opposition has every right to urge this course, is not next year's presidential election the place to decide the future of the country? What kind of democracy is it where a democratically elected president can be forced out of office by mobs?

When Mohammed Morsi, the elected president of Egypt, was ousted in a military coup last summer, backed by huge crowds in Tahrir Square, John Kerry said the army was "restoring democracy."

Is this the new American concept of democracy, that when an elected government makes a major decision many dislike, the people should take to the streets and shut down the capital until the president reverses course or resigns?

President Obama is telling the Yanukovych government to respect the protesters. No violence. But how would Obama react if thousands of Tea Party members established an encampment on the Mall, burned down the DNC, occupied the Capitol and demanded he either repeal Obamacare or resign?

Russia has accused us of meddling in Ukraine's internal affairs.

And when we see the State Department's Victoria Nuland in Maidan Square egging on the protesters, and hear tape of Nuland discussing with the U.S. ambassador whom we want in the next Ukrainian government, do not the Russians have a point?

Under George W. Bush, our National Endowment for Democracy helped to engineer color-coded revolutions in Serbia, Ukraine, Georgia and Kyrgyzstan, but it failed in Belarus. We have a long track record of meddling.

And was it not interference in the internal affairs of Ukraine for John McCain to fly to Kiev, go down to Maidan Square, and do his best imitation of Mario Savio in Sproul Plaza?

If the Cold War is over, why are we playing these Cold War games?

Imagine where America would be today had the neocons gotten their way and brought Georgia and Ukraine into NATO.

What is coming in Ukraine, however, is likely to be far worse than what we have seen up to now. For this political crisis has deepened the divide between a western Ukraine that looks to Europe, and an east whose historic, linguistic, cultural and ethnic bonds are with Mother Russia.

With reports of police and soldiers in western Ukraine defecting from the government to join the rebellion, Ukraine could be a country sliding into civil war. If so, the spillover effects could be ominous.

But, to be candid, what happens in Ukraine has always been more critical to Moscow than it has ever been to us.

As Barack Obama said of Syria, this is "somebody else's civil war."

FLASHBACK: Remember When Pelosi Was In Favor of the Payroll Tax Cut?
Beth Baumann